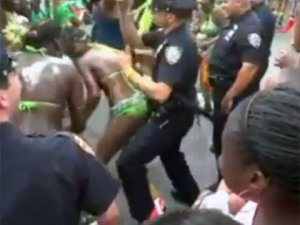 (CBS/WCBS/AP) NEW YORK - The NYPD is reportedly investigating the actions of uniformed officers who were caught on camera grinding and gyrating with half-naked women last week at the West Indian Day Parade.

The homemade video posted online shows women in skimpy costumes rubbing themselves against patrolmen. One set of officers doesn't respond. But two others appear to join in dirty dancing as revelers cheer and laugh.

According to the New York Daily News, a source familiar with the investigation says, "It's not corruption. But it looks bad. It is young cops doing something stupid."

Police Commissioner Raymond Kelly said Tuesday  it wasn't unusual for police assigned to patrol the parade to get caught up in its rowdy spirit, but that he wishes NYPD officers had not engaged in the provocative dancing.

The NYPD reportedly sent CBS station WCBS a statement saying it "is investigating" the incident, which took place during the Brooklyn parade which is known for its wild costumes and uninhibited dancing.

A disciplinary unit was reportedly reviewing the tape Tuesday.