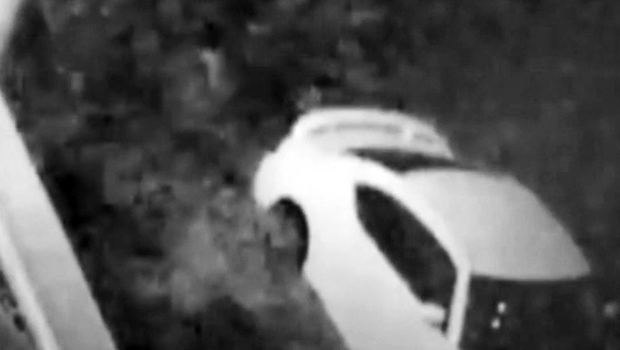 DALLAS -- While the search effort has been scaled back, crews will continue on Wednesday to look for a Southern Methodist University police officer who was swept away by rushing waters more than two weeks ago, CBS DFW reports.

Newly released surveillance video shows the man trying to get out of harm's way.

It seems improbable that the normally calm Turtle Creek in Dallas could turn into a raging river. But that is what happened on July 5 when the water level came up high enough to sweep away Mark McCullers and his car. A nearby home's security camera captured what happened in the flood.

McCullers was working a private security job at a construction site in the area. Strong storms moved through North Texas, and flash flooding brought the creek's water level above bridges. McCullers called 911 from his car and, at one point, stated that the water was up to the hood of his vehicle.

"It's flooding," McCullers said."It's about to go in my car."

"OK, you're in your car?" a dispatcher said.

"It's moving on its own, or you're floating?" the dispatcher asked.

"Moving on its own," McCullers said.

"Do you need the engine over there to do a water rescue?" the dispatcher asked.

"Yeah, I think so," McCullers said."It's getting to the point where it's getting pretty heavy."

Emergency crews quickly responded to the scene, but by the time that they arrived, the water had already dropped back below the bridge and there was no sign of McCullers or his car. The surveillance camera video offers a better understanding of what the officer was up against that night and how dangerous flash flooding can be.

The video shows the car being rushed into a drainage tunnel. Search crews found the sedan; however there has still been no sign of the officer. Crews with Texas Parks & Wildlife are continuing to search for his body in both Turtle Creek and, most recently, the Trinity River.

McCullers was a Marine and a father to six children.