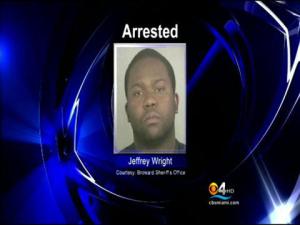 (CBS) LAUDERHILL, Fla. - Police say a man enraged over being given the wrong coffee order at a Dunkin' Donuts drive-thru in Lauderdale, Fla. entered the store and hit an employee over the head with a loaded gun, CBS Miami reports.

Police say the altercation began around 1 p.m. on Tuesday. Investigators say surveillance video from the store shows Wright and Longo entering the business and having an animated conversation with store employees. Punches were allegedly thrown and several people rushed over to try and break up the fight, the station reports.

Seconds later, police say the video shows Wright pulling out a gun, which was later determined to be loaded, and using it to hit an employee over the head numerous times.

Gary Benjamin, another Dunkin' Donuts employee, said he was in the middle of the melee trying to keep things calm.

"I was trying to play peacemaker," Benjamin told CBS Miami. "I didn't want things to escalate further than they did."

Benjamin said the employee involved in the incident is OK.

"He was struck in the head a few times," Benjamin said. "I heard the blow connect. But he's ok. He's a tough kid."

The police report reveals that Wright is a security guard with a concealed weapons permit, the station reports.