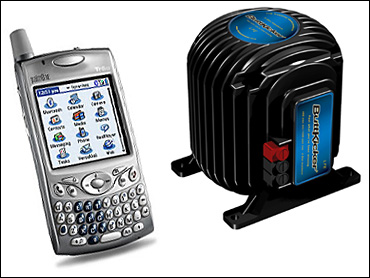 Just about anything that plugs into the wall or takes a battery was on display at the Consumer Electronics Show that wrapped up Sunday in Las Vegas, but the most prominent products were the omnipresent big-screen flat panel TVs.

The prize for biggest TV goes to Samsung, which demonstrated a 102-inch plasma display that looked as clear as it did large. The company won't put a price tag on the TV, which it showing off for demonstration purposes and bragging rights, but Samsung also displayed an 80-inch screen that it will sell later this year for tens of thousands of dollars.

On the other extreme, Verizon Wireless announced that it will offer TV via cell phone. The service, called VCAST, will take advantage of Verizon's high speed network to deliver made-for-cell phone versions of popular TV shows from MTV, Comedy Central, Fox and other providers. The service is designed for short segments, not live video.

Verizon isn't the first company to offer video on cell phones. Sprint last year began offering the MobiTV service that provides live feeds from a variety of providers. The difference with the Verizon service is the high-speed network which, based on my tests of both systems, offers better quality video. Verizon plans to charge an extra $15 a month for the service.

Clearly, the technology is in place but the question remains whether people really want to watch TV on their cell phones.

Both Orb Networks and SlingMedia displayed devices that will allow you to beam TV, DVDs or other video entertainment from your home to remote devices, anywhere in the world.

Did We Mate Or Murder Neanderthals?

What's next for "Starman" and Tesla in space?

The $249 SlingBox Personal Broadcaster consists of a box that you connect to a TiVo personal video recorder, satellite receiver, cable box or other video/audio source as well as to the Internet through a broadband connection. Then you can log on to the device from a laptop, a web-enabled personal digital assistant or even a cell phone from anywhere in the world to watch the content directly from your home via the Internet. The company calls the process "placeshifting" because it "lets consumers shift the place they can watch TV the same way a VCR shifts the time they can watch."

While Slingbox works with any video or audio source, Orb Networks has a $9.95 a month service that allows you to transmit video and audio from a Windows Media Center PC to a remote device. Microsoft and its hardware partners have recently released the third version of its Media Center PC operating system designed to enhance computing with home entertainment functions.

Universal remote controls have been around for years but they're getting a lot more sophisticated. Logitech's $249 Harmony Remote 676 for example, not only controls up to 15 devices, but it can be programmed via a PC or Mac, which is a lot easier than keying in all those obscure codes. Universal Electronics at CES, unveiled the NevoSL remote that can not only control all your video and audio equipment but can also use your home's wireless network to beam music, video and display photos from PCs to TVs around the house.

Digital cameras have been a staple at CES shows for years but Kodak announced what could be a breakthrough in the way people share photos. The Kodak Easyshare One Wireless Camera has a built-in WiFi network adapter that allows it to send pictures via a wireless network in the home or a remote location such as a coffee shop.

That will make it possible to email photos directly from the camera without having to connect it to the PC. That could also solve the storage problem for people who use the camera on a long trip. Instead of storing the pictures on a memory card, just e-mail them home.

Cell phone companies were at CES in force, showing off features that are turning phones into multifunction devices including cameras, video cameras and pocket-sized computers.

The $449 Trēo 650 from palmOne (available on the Sprint network) not only combines talking on the phone with all the functions of the Palm PDA but also offers a camera, an MP3 player and even the ability to watch video clips, literally, from the palm of your hand.

Not to be outdone, several vendors showed off advanced phones using Microsoft's Pocket PC operating system. The $800 BenQ P50 phone has a 1.3 megapixel camera, WiFi wireless networking, and the ability to run all the applications that come with Microsoft's Pocket PC operating system including scaled-down versions of Word, Excel and Outlook. At $800, it's not cheap but the price could be lower if subsidized by cell phone companies.

Even though Apple is not at CES, evidence of the success of its iPod is everywhere. Several companies were showing off iPod accessories ranging from cases to sophisticated interfaces that allow you to integrate on iPod with a car stereo system.

Precision Interface Electronics was showing off car audio systems with the typical AM/FM/CD features plus the ability to control the iPod from the car radio. So far, the company says it has deals with Audi, Ford, Toyota and Volkswagen to build them into new cars.

Monster Cable showed off its iCruze for iPod that allows you to connect an iPod into the CD-changer input on (some) existing car stereos so that you can control the iPod the same way you would control your CD-changer.

There were, of course, plenty of wacky products but the one I liked the most is the ButtKicker from The Guitammer Company. The plug on the device - promoted by the company's musician founder as the latest in pro sound -connects to the audio jacks on a TV, video game or other source. The device itself is then installed under a seat cushion to transfer the vibrations of low frequency sounds directly to your derriere.

I watched a movie with charging elephants and actually felt the earth shaking. It was like watching "feel-a-vision." I can only imagine where this technology might lead.