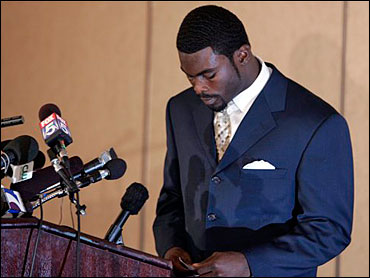 Michael Vick apologized to the NFL and his Atlanta Falcons teammates Monday for saying he was "ashamed" and disappointed over his role in a dogfighting operation.

Shortly before making his first public statements, the star quarterback pleaded guilty to a federal dogfighting charge and awaits a Dec. 10 sentencing date that likely will send him to prison.

Vick vowed to redeem himself at a news conference following his appearance in U.S. District Court.

"I made a mistake in using bad judgment and making bad decisions," he said. "Dogfighting is a terrible thing."

He concluded by saying, "I offer my deepest apologies to everyone. And I will redeem myself. I have to."

Along with apologizing to his employers, Vick apologized "to all the young kids out there for my immature acts."

"I totally ask for forgiveness and understanding as I move forward to bettering Michael Vick the person, not the football player," he said, looking somber throughout the brief news session.

Vick, who is suspended indefinitely by the NFL, entered his guilty plea before U.S. District Judge Henry E. Hudson, who asked: "Are you entering the plea of guilty to a conspiracy charge because you are, in fact, guilty?"

Hudson emphasized he is not bound by sentencing guidelines and can impose the maximum sentence of up to five years in prison.

"You're taking your chances here. You'll have to live with whatever decision I make," Hudson said.

In his written plea filed in federal court Friday, Vick admitted helping kill six-to-eight dogs and supplying money for gambling on the fights. He said he did not personally place any bets or share in any winnings.

The NFL suspended him indefinitely and without pay Friday after his plea agreement was filed. Merely associating with gamblers can trigger a lifetime ban under the league's personal conduct policy.

In Atlanta, the Falcons said they would not cut Vick immediately because of salary-cap issues.

Now suspended indefinitely without pay, Vick could lose close to $150 million, reports CBS News correspondent Mark Strassmann, including $50 million in lost endorsements, $71 million remaining on his $130 million contract with the Falcons and $22 million in already-paid bonus money that the team says it will seek, though there is no guarantee that it will get that money back.

"We cannot tell you today that Michael is cut from the team," owner Arthur Blank said.

The plea agreement calls for a sentencing range of 12 to 18 months.

A federal indictment issued in July charged Vick, Purnell Peace of Virginia Beach, Quanis Phillips of Atlanta and Tony Taylor of Hampton with an interstate dogfighting conspiracy. Vick initially denied any involvement, and all four men pleaded innocent. Taylor was the first to change his plea to guilty; Phillips and Peace soon followed.

The details outlined in the indictment and other court papers fueled a public backlash against Vick and cost him several lucrative endorsement deals, even before he agreed to plead guilty.

Vick's plea Monday came hours before the Falcons play an exhibition game at home against the Cincinnati Bengals. This will be the first chance for the team to see what effect Vick's case has on attendance at the Georgia Dome. Vick wears the biggest-selling jersey in team history and is given much credit for the team's 51 consecutive sellouts.

As for the dogs found on Vick's property, the ASPCA will evaluate the dogs and based on their findings, will make recommendations to the U.S. Department of Agriculture, according to a statement released by the Eastern District of the U.S. Attorney's office.
MMVII, CBS Interactive Inc. All Rights Reserved. This material may not be published, broadcast, rewritten, or redistributed. The Associated Press contributed to this report