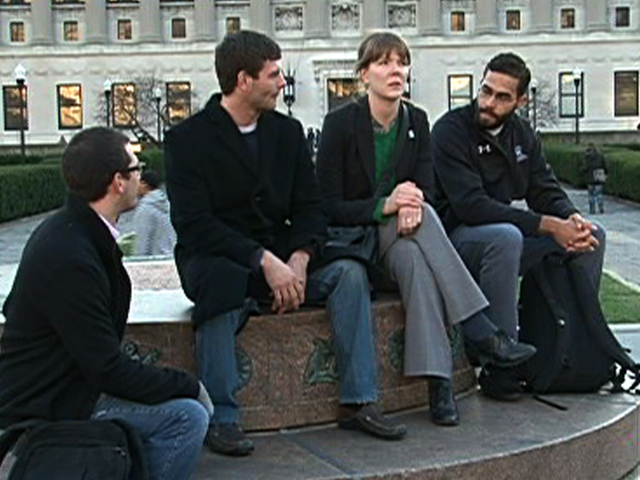 Tens of thousands of American troops are coming home from Iraq and Afghanistan, and finding out just how tough it is to get a job right now.

So, thanks to the GI Bill, many are going to school instead -- and not just any school -- the Ivy League sometimes comes calling, recruiting veterans.

Jason Lemieux was an infantry assault man and served three tours in Iraq. Karim Delgado was a corporal stationed in Southeast Asia for humanitarian relief efforts. Helen Shor was deployed three times to Iraq. AJ Lugo was a corporal deployed once to Afghanistan; he served as a combat correspondent and broadcast journalist.

All four of those Marines joined as teenagers, enlisting while the country waged wars in Iraq and Afghanistan.

Despite successes on the field of battle, the uncertainty of what lies ahead follows many troops home. But opportunity in the form of a college education has led this group to a school that is offering Ivy-League status to students -- like Delgado -- who quit high school before enlisting in the military.

Delgado said, "It took me a very long time to even apply to Columbia, because I was afraid somewhere deep inside that maybe I wasn't actually good at academics."

Shor told "The Early Show" that the biggest challenge was adjusting to the "really intense" academic environment after being out of the classroom for so long.

Lugo had just about 10 days before his last day of active duty and his first day of classes.

"So I went from one very different world into another. And that was tough," he said.

Columbia's dean of admissions, Curtis Rodgers, is confident veterans in the student body can excel at the country's best institutions, while also bringing a rich diversity to their campuses.

All four are full-time students because of programs like the G.I. Bill and a matching grant program from Veterans Affairs, which enables veterans to attend school full-time and without paying anything out of pocket.

However, last year, Congress passed changes to the GI Bill, limiting government tuition payments to private schools like Columbia. For now though, Columbia is making up the difference by increasing financial aid for veterans.

For more on the veterans' military experience, their current life in the classroom and their plans for after school, check out the full report in the video above.