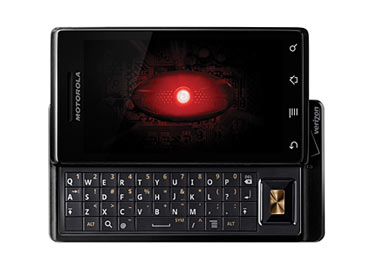 This story was written by CNET's Marguerite Reardon

Verizon Wireless customers will soon be able to get their hands on the much anticipated Google Android phone called the Droid.

The companies officially unveiled the device at an event here. Like most smartphones of its class, the phone will cost $199 with a two-year contract. And it will be available to consumers starting November 6. Customers can pre-order the device now.

The device offers voice-activated search that allows users to speak a query and the Google-powered search engine will deliver Web results or results from the device such as contacts, music, and photos. The voice search also works with the new turn-by-turn directions for Google Maps. It allows users to view geographic information, such as My Maps, Wikipedia entries, and transit lines on the map.

John Stratton, executive vice president and chief marketing officer for Verizon Wireless, said he had used the navigation service just yesterday on a trip to Arkansas. He said he simply spoke "gas station" into the phone and it quickly found nearby gas stations. When he clicked on one of them, it activated the turn-by-turn directions and he was given spoken directions right from the phone.

While the new Droid is loaded with lots of cool Android apps and has access to the more than 10,000 applications available in the Android Market, it does not have many of Verizon's branded services. For example, Verizon's VCast music service is missing in this version. But Stratton said that will be added eventually. And the phone does not have Verizon's VZ Navigator, since it comes bundled with the Google Android navigation.

The good news is that some of the services, such as navigation that Verizon charges for on devices running VZNavigator, will be free to users of the Droid.

In terms of the specifications, they are exactly what had been expected thanks to multiple leaks about the product. It has a Android 2.0, 5-megapixel camera, Wi-Fi, Bluetooth, and GPS. It has a Webkit HTML 5 browser, and it's powered by a 550MHz processor and a 1,400mAh lithium ion battery offering 6.4 hours of continuous talk time and up to 11 days of standby time.

It's clear that the Droid is targeted at people looking for an alternative to the iPhone. And Verizon is planning the biggest media campaign it has ever launched for the device. But Stratton said the company is not going to specifically target the iPhone in its marketing. As a sort of pre-Droid ad campaign, Verizon spoofed iPhone advertising.

"We had some fun here with the iPhone stuff," he said. "The teaser was to wake up the market. And I've got to give Apple credit. They revolutionized the industry as a new player and that's extraordinary. But we have to show that iPhone is not untouchable."

Instead, Stratton said that Verizon will focus its advertising more on what the Droid can do rather than what other devices can't do.

Current Analysis analyst Avi Greengart said he is impressed with the new device, and he expects it to shake up the market.

Specifically, he said it's important that the device matches the iPhone in terms of onboard storage. And even though it doesn't come with Verizon's VCast music service, it does work with Amazon's music and media service. And users can also manually sync their unprotected iTunes music or other MP3 music to the device. But at least for now, there is no media synchronization. Stratton said that is coming, but right now the iPhone trumps the Droid in terms of ease of use in getting music and media on the device.

Motorola and Verizon are also offering an accessory that mounts the phone in the car. When the phone is in this mount, it recognizes it is in the car and it provides an car friendly user interface.

"This is going to be disruptive to other smartphones and personal navigation devices," Greengart said.

But the big question is whether or not consumers will flock to the Droid. Several new smartphones are launching right before the holiday season, including additional new Android devices and Research In Motion's new Blackberry Storm 2, which is also exclusively on Verizon's network.