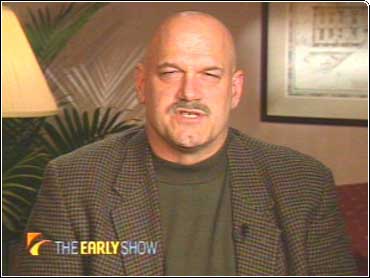 The notoriously plain-spoken Governor Jesse Ventura is on a bus tour through Minnesota farm country, getting in touch with his constituents, autographing his book and his action figure doll, reports CBS White House Correspondent Bill Plante. Ventura may be better known than most politicians who want to be president, but over and over, he insists he has no further political ambitions.

"I believe government was designed so you come from the private sector, serve, and when you're done, go back to what you used to do. I think that's what our forefathers had in mind," Ventura told CBS News Early Show Co-Anchor Bryant Gumbel. "Somehow that's gotten lost through the years. Now the mind-set is you get elected to this office, which is a stepping stone to another office."

On this trip, the governor is trying to connect with rural Minnesota to push his populist agenda of better roads, better communications and a better legislature. But wherever Ventura goes, he draws crowds. Not so much because he's the governor, but because he's a celebrity.

The Minnesotans he met on this trip generally support the governor.

"He's a down-to-earth guy, and he's looking out for the down-to-earth issues," one man said. "Some things everyone's not going to agree with. But he sees it as he sees it and that's the way he's gonna call it."

And sometimes, his views - off the wall for a politician - have gotten him in trouble. But Ventura shrugs off the criticism.

"I live today and certainly make mistakes," Ventura said. "I'm human, but you move on and you continue to do your job. What I believe personally has no bearing on how I govern."

And don't look for Ventura to change any time soon.

"I'm not going to give up having fun. I've enjoyed every occupation I've had in life," Ventura said. "If you get to the point where you don't enjoy what you're doing, you better look for something else to do."

Although Ventura said he cannot go to court over the new 15 percent poll approval rule for inclusion in presidential debates, he said he hoped potential Reform Party presidential candidate Donald Trump would.

"This is totally to keep candidates like me from winning," Ventura said. "They learn that a candidate like me can win, and they don't want it to happen."