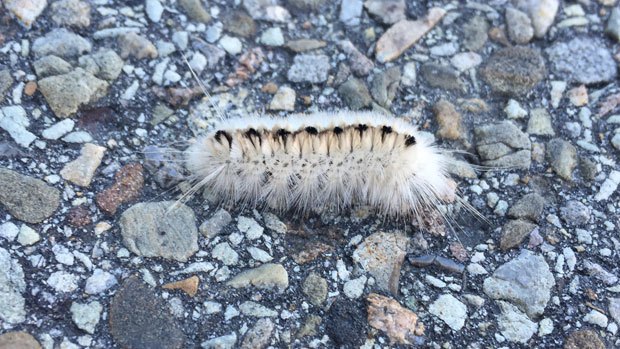 PITTSBURGH - A venomous caterpillar from Canada has recently been spotted in parts of central Pennsylvania.

If you see the white hickory tussock moth caterpillar, don't touch it. The insect's fuzzy black spines contain venom to ward off predators, but can also also irritate human skin. The good news is the nasty rash it leaves behind is treatable with lotion and ice.

What are some of the caterpillar's distinguishing features? It can be either white or brightly colored. More importantly, it has hairs with barbs that can stick into your skin and its back contains rash-giving venom.

If that's not enough to make you want to leave it alone Ehrlich Pest Control entomologist Chad Gore told CBS Pittsburgh that contact with the hairs on this critter will leave them embedded in your skin and a red itchy rash will likely follow.

"The hairs embed into the skin and then they pull away from the caterpillar, so they're left behind and they cause a dermal reaction," he said. The level of irritation it causes may vary. "It could be just no response at all to a minor response to something that's kind of creating a pustule."

Gore added that there have been cases where someone actually ate a white hickory caterpillar. The resulting stomachache, nausea, fever or some combination of those symptoms was probably a tough-learned lesson.

"It's best to let the caterpillars do their own thing. They want to be left alone so it's probably a good idea to just oblige," Gore said.

If you do end up with a white hickory rash, it can be easily treated with conventional anti-rash medications. But if it persists you should check with a medical professional.

The good news is we are on the back end of their caterpillar life cycle. Soon they'll all be tucked away in webs to pupate on their way to emerging as moths next spring.

Male and female hickory tussocks mate every year in late spring, and end up laying large clumps of eggs that can number from 50 to hundreds. The young caterpillars end up eating leaves in great quantities, according to the University of Wisconsin-Milwaukee "Bug of the Week" blog. These animals are "skeletonizers," which means that they eat the green area in-between leaf veins. These caterpillars are mainly found munching on nut trees, along with elm, ash, aspen, willow, and oak trees.

​What advances in robotics and AI bode for us