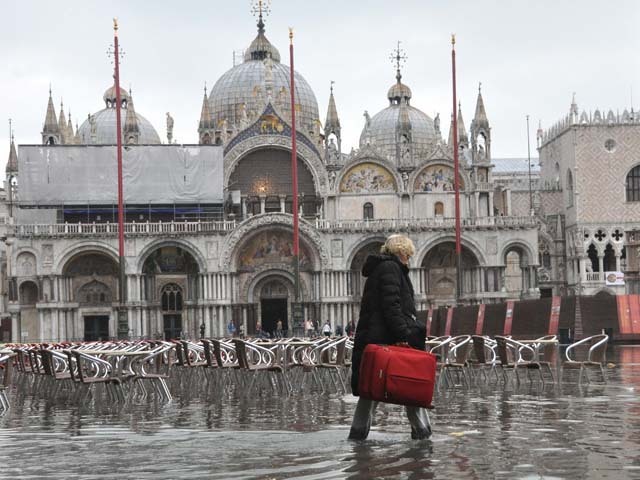 Venice is sinking, and the nearby Adriatic sea--like the global sea level--is rising. The city could, some estimates suggest, be underwater by the end of the century. Much of the trouble is due to Venice's precarious, low-lying position in the middle of a lagoon, but human activity in the area has played a role in the city's subsidence, as well. As Scott K. Johnson explains at Ars Technica:

The pumping of shallow groundwater in the mid-1900s also contributed to the problem. Water in the pores between grains of sediment provides pressure that bears some of the load. When pore pressure decreases, or water is removed completely, grains can be packed together more tightly by collapsing the pore spaces. As sediment is compacted, the land surface drops. While the effect was small (less than 15cm), Venice doesn't have much wiggle room.

One possible solution to the problem may be, in essence, reversing what was done last century: rather than pumping groundwater out from under Venice, some scientists suggest, it's time to pump it back in. While injecting water won't undo all the damage, it can stop subsidence--and even slightly lift an area. The technique has worked before; it halted the downward creep of Long Beach, California, half a century ago, as nearby oil extraction caused the city to sink.

Water Resources Research: How to save Venice

In the current study, Italian researchers modeled how groundwater injection would work in Venice and found, happily, that the technique would likely be a success:

The group simulated the effects of 12 injection wells in a ring around the city. The results showed that, after 10 years of continuous seawater injection (a total of almost 150 million cubic meters of water), the city could be lifted 25-30 centimeters.