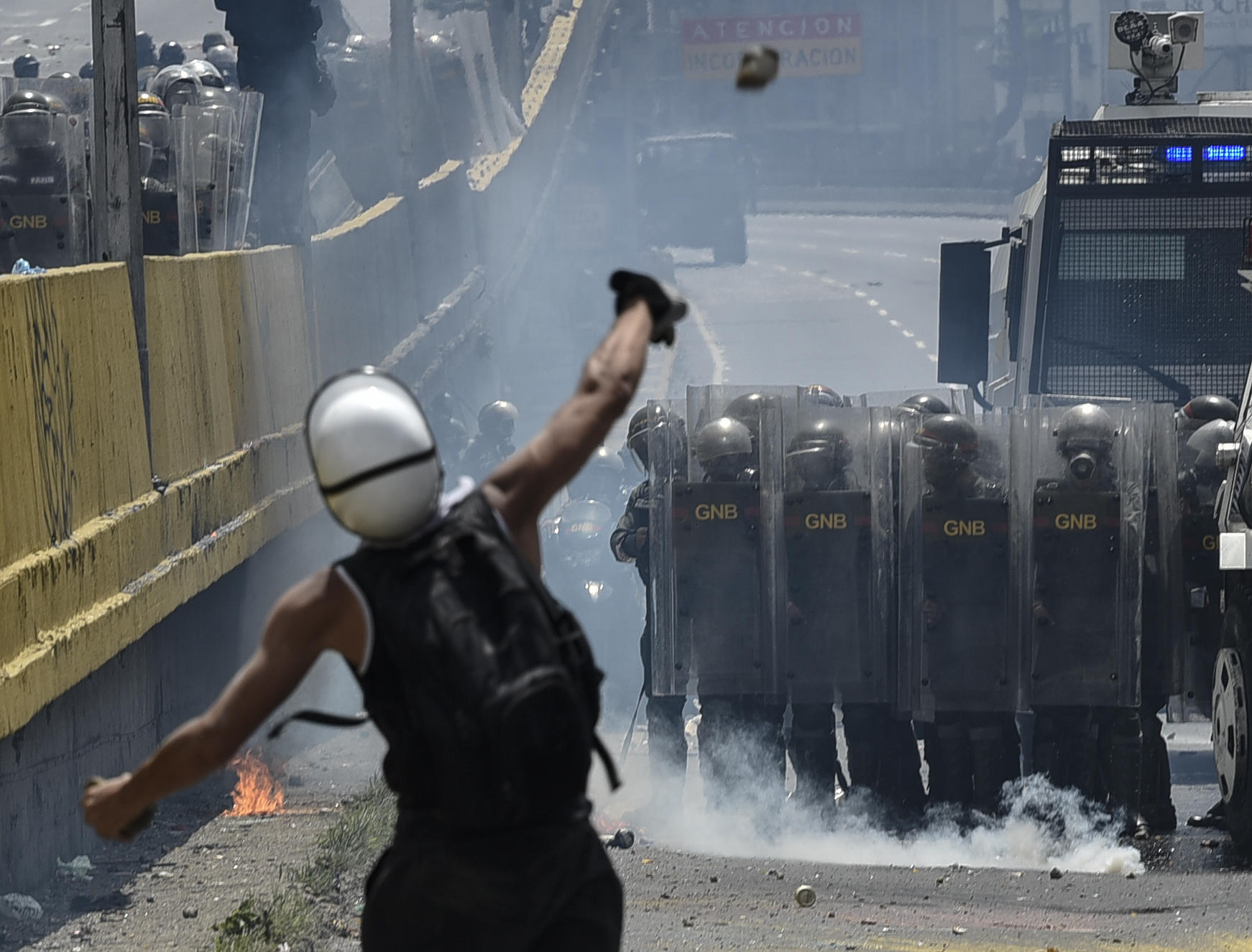 CARACAS, Venezuela -- Dozens of people were injured and a 27-year-old man killed Wednesday during another day of violent clashes in Venezuela's capital as angry demonstrators demanded elections.

National guardsmen launched tear gas and a group of armed pro-government militiamen harassed protesters as they tried to march to the Supreme Court. One masked militia member fired several shots into the air. The militia later dispersed after officers intervened.

At least 93 people were injured in Caracas and demonstrator Miguel Castillo was killed. Authorities also announced that Anderson Dugarte, 32, died from a gunshot wound he suffered Monday at a protest in Merida. The violence pushed the death toll to at least 39 in more than a month of street protests and political turmoil.

The unrest took an ugly new turn on Wednesday, meanwhile, as protesters used so-called "poopootov cocktails" for the first time, hurling bags and bottles filled with feces at security forces on Caracas streets.

"These kids live in a dictatorship, they have no other option but to protest however they see fit," Maria Montilla, 49, told the Reuters news agency as she joined a protest on Caracas' main thoroughfare, taking up a position behind younger demonstrators wearing masks and taking aim at National Guard troops with stones and feces.

The youths hurled stones and the so-called "poopootov cocktails" at National Guard troops who blocked their route through the center of the capital city. The troops responded with tear gas and water cannon.

"There's nothing explosive here. It's our way of saying, 'Get lost Maduro, you're useless!"' a young protester told Reuters as he prepared to lob another bottle of feces at security forces.

Numbers revealed this week by Venezuela's health ministry show how severe an impact the crisis is having on the nation's well-being; the figures show infant mortality soared by 30 percent during 2016, and maternal mortality by a shocking 65 percent.

Health experts say the statistics -- which are worse even than in war-torn Syria -- reflect the cash-strapped government's inability to purchase even the most basic supplies for hospitals and clinics, meaning women die during childbirth due to dirty instruments and lack of antibiotics.

Maduro has dismissed the opposition movement as a violent, far-right effort -- supported, he says, by the U.S. --intent on removing him from power.

Protesters marching in downtown Caracas chanted: "Who are we? Venezuela! What do we want? Freedom!" Militiamen approached, all dressed in dark colors with pieces of cloth covering their faces. About three carried guns.

The protesters fled, screaming in fear. Opposition leaders have blamed armed pro-government groups known as "colectivos" for a number of protest deaths.

One of the militiamen fired into the air, though no one was hit.

More than 1,300 people have been detained in the unrest, not including 250 civilians who have been presented before military tribunals. Maduro is vowing to resolve the crisis by holding a special assembly to rewrite the nation's constitution, though opposition leaders have refused to participate.