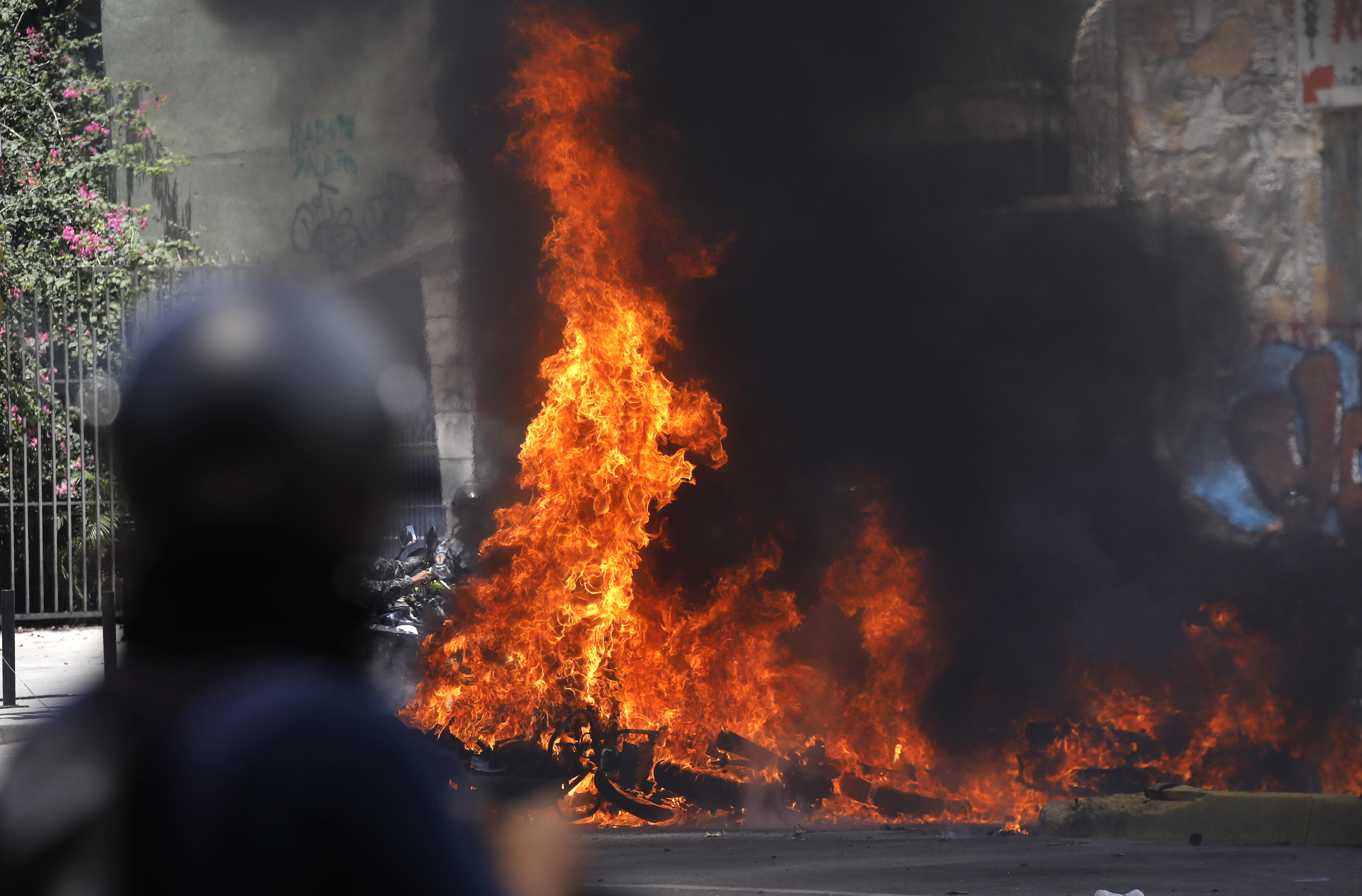 CARACAS, Venezuela -- Venezuela's chief prosecutor's office is reporting three deaths on the day of a controversial vote for a constituent assembly that opposition leaders fear will trigger the end of democracy in Venezuela.

The office tweeted that 28-year-old Angelo Mendez and 39-year-old Eduardo Olave were killed at a protest Sunday in Merida. Thirty-year-old Ricardo Campos was killed in a separate incident in Sucre.

Few details were provided on the deaths.

Leaders with the opposition Democratic Action party on Twitter identified Campos as the group's youth secretary in Sucre, a state in northern Venezuela east of the nation's capital.

The deaths bring the total to at least 122 killed in nearly four months of political upheaval.

Meanwhile, Venezuelans appeared to be abstaining in massive numbers on Sunday in a show of silent protest against a vote to select a constitutional assembly giving the government virtually unlimited powers.

Associated Press journalists toured more than two dozen polling places in neighborhoods across the capital, including many traditional strongholds of the ruling socialist party in southern and western Caracas. Virtually all the polling places saw hours-long lines of thousands of people in past elections over the last two decades of socialist government.

One site, a sports and cultural complex known as the Poliedro, had several thousand people waiting about two hours to vote, many having traveled from opposition-dominated neighborhoods where polling places were closed. Of the dozens of others sites seen by the AP, two in the loyalist-heavy neighborhood of El Valle had lines of approximately 200 to 400 people. All the others had at most a couple of dozen voters, and many had less than a half-dozen or were completely empty.

Opinion polls say more than 70 percent of the country is opposed to Sunday's vote.

"People aren't in agreement with this," said Daniel Ponza, a 33-year-old drywall contractor, as he watched a few dozen people outside a polling place in El Valle. "People are dying of hunger, looking for food in the trash. And I think this is just going to make things worse."

Sunday evening, U.S. ambassador to the United Nations sent a message on Twitter calling the Venezuela election a "sham" and "step toward dictatorship":

In opposition-dominated eastern Caracas, riot police used tear gas to stop protesters from gathering for a march on the capital's main highway. At least three police were wounded when one of their motorcycles detonated in a powerful explosion. The cause of the explosion was not immediately clear.

After voting at dawn, President Nicolas Maduro called for international acceptance of what he called his government's fight against a violent opposition trying to sabotage his administration.

The run-up to the vote has been marked by months of clashes between protesters and the government that have left at least 116 dead and nearly 2,000 wounded. A 61-year-old nurse was fatally shot by men accused of being pro-government paramilitaries during a protest at a church a few hundred feet from the school where Maduro voted.

"We've stoically withstood the terrorist, criminal violence," Maduro said. "Hopefully the world will respectfully extend its arms toward our country."

In an unusual moment this morning when Maduro cast his own ballot on state-controlled national television, his national ID card was to be scanned. He intended to make a statement that his vote was counted and said: "We are going to verify my national ID card so that the record shows that I came to vote and my ID card will show this for posterity, that I voted on this historic day of the constituent assembly of July 30th."

When the female official of the National Electoral Council (CNE) proceeds to use a smartphone to scan Maduro's card, a second camera zooms in to reveal that according to CNE's own system, that "person does not exist, or the card has been revoked."

Maduro appears livid but doesn't acknowledge the misshap, pauses for a second and then grabs his wife's ID card for scanning.

Social media was abuzz with the misshap, which fanned the flames of speculation about the place of birth of the socialist president, whose mother is rumored to be a Colombian national. Following an opposition-mandated special commission investigation into the matter, the socialist-majority Supreme Court issued a ruling last October that stated that Maduro had been born in Caracas in 1962, but did not produce a birth certificate.

Some opposition leaders continue to sustain that they have proof that Maduro was born a Colombian national, which would make him constitutionally ineligible to occupy the presidency.

Maduro's highly vocal critic and former president of Colombia ridiculed Maduro in a tweet that reads: "My fellow countryman, didn't they let you vote?"

Despite that hiccup, the opposition is boycotting Sunday's vote, contending the election has been structured to ensure Maduro's socialist party continues to dominate. So all 5,500 candidates for the 545 seats in the constituent assembly are his supporters and the vote's success is being measured by turnout.

The government is encouraging participation with tactics that include offering social benefits like subsidized food to the poor and threatening state workers' jobs if they don't vote.

Others said they were there out of conviction that the constitutional assembly would help the government fend off what they called an international capitalist conspiracy to undermine Venezuela's socialist system with the help of the domestic opposition.

"The crisis, the shortages of food and medicine, that isn't the government's fault," said Luis Osuna, a 42-year-old private bodyguard. "Those who are attacking us to kill us with hunger and blame the government are the same enemies the government's always had."

Once one of Latin America's wealthiest nations, Venezuela has spiraled into a devastating crisis during Maduro's four years in power, thanks to plunging oil prices and widespread corruption and mismanagement. Inflation and homicide rates are among the world's highest and widespread shortages of food and medicine have citizens dying of preventable illnesses and rooting through trash to feed themselves.

The special assembly being selected Sunday will have powers to rewrite the country's 1999 constitution but will also have powers above and beyond other state institutions, including the opposition-controlled congress.

While opinion polls say a vast majority oppose him, Maduro made clear in a televised address Saturday evening that he intends to use the assembly to govern without limitation, describing the vote as "the election of a power that's above and beyond every other."

He said he wants the assembly to strip opposition legislators of their constitutional immunity from prosecution and indicated he eager to prosecute many more members of the opposition parties that control a handful of state governments along with the National Assembly, providing one of the few remaining checks on the power of the socialist party that has ruled this OPEC nation for nearly two decades.

"The right wing already has its prison cell waiting," the president said. "All the criminals will go to prison for the crimes they've committed."

Saying the assembly will begin to govern within a week, Maduro said its first task in rewriting the constitution will be "a total transformation" of the office of Venezuela's chief prosecutor, a former government loyalist who has become the highest-ranking official to publicly split from the president.

The Trump administration has imposed successive rounds of sanctions on high-ranking members of Maduro's administration, with the support of countries including Mexico, Colombia and Panama. Vice President Mike Pence promised on Friday that the U.S. would take "strong and swift economic actions" if the vote went ahead. He didn't say whether the U.S. would sanction Venezuelan oil imports, a measure with the potential to undermine Maduro but cause an even deeper humanitarian crisis here.

Maduro's supporters on the Supreme Court set off the protests and clashes between police and demonstrator when they tried to strip the National Assembly of its powers in April. Most of the dead have been protesters apparently shot by police and government-linked paramilitaries.

The opposition has organized a series of work stoppages as well as a July 16 protest vote that it said drew more than 7.5 million symbolic votes against the constitutional assembly.