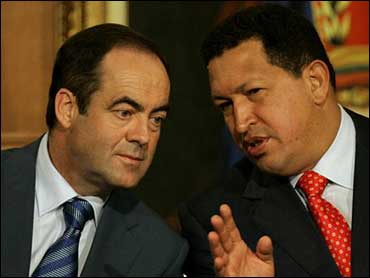 Spain agreed Monday to sell 12 military planes and eight patrol boats to Venezuela in a $2 billion deal that the United States has threatened to block.

The U.S. State Department repeated concerns about the sale because the planes and boats carry U.S. parts and technology, but Spanish Defense Minister Jose Bono joined Venezuelan leader Hugo Chavez in saying the sale should not concern Washington.

"Is there some rule that prohibits this sale? ... There is no international embargo," Bono said at the signing ceremony.

Bono said neither the boats nor transport planes were armed and that the patrol planes were only equipped for self-defense.

"This is not a warplane," he said.

Venezuelan President Hugo Chavez accused Washington of hypocrisy for trying to hold up the sale despite using warplanes to invade Iraq and called it another example of how the U.S. attempts to dominate weaker countries.

"The imperialist aim doesn't want any country on this earth to develop. It wants to keep us as slaves, it wants to keeps us backward," Chavez said.

"We in Venezuela don't have to be giving any explanation, much less under imperialist pressure."

Last week, the U.S. ambassador to Spain, Eduardo Aguirre, said that Washington could refuse to allow U.S. technology to be transferred to Venezuela, adding that "in the long run we hope the sale won't go ahead."

"We are currently looking at technology licensing issues," he said. "There hasn't been any final conclusion on that question yet.

Under a deal first announced in March, Spain's state-controlled shipyard Navantia will manufacture the eight patrol boats, while the European consortium EADS-Casa will supply the 10 C-295 transport planes and two CN-235 patrol planes.

Venezuelan Navy Vice Adm. Armando Laguna said the boats and planes would be delivered within six to seven years and that any U.S.-made parts could easily be replaced with others made in France, Italy or Germany.

"We'll change the equipment if their export isn't approved or if they don't grant the export license," Laguna said. He said the U.S.-made components aren't strategic technology and include such things as an air conditioning system and communications equipment.

Chavez has said that the vessels and planes will be used to combat the drug trade in Venezuela, which borders Colombia, the world's top cocaine producer.

The U.S. also has expressed concerns that Venezuela is buying 100,000 Kalashnikov assault rifles from Russia. The first 30,000 rifles are due to arrive in December.

U.S. officials have accused Chavez, an ally of Cuban leader Fidel Castro, of supporting radical political movements in Latin America and "destabilizing" the region. Chavez denied that as "absolutely false."

Relations between Spain and the United States also have chilled under Spanish Prime Minister Jose Luis Rodriguez Zapatero, who withdrew Spanish peacekeeping troops from Iraq immediately after he took office in April 2004.

Bono said while Spain and the U.S. remained "friends and allies," the deal represented an enormous opportunity that Spain saw no reason to forgo.

"What country with a business opportunity would give it away to another country?" said Bono, adding the deal would create nearly 1,000 jobs.