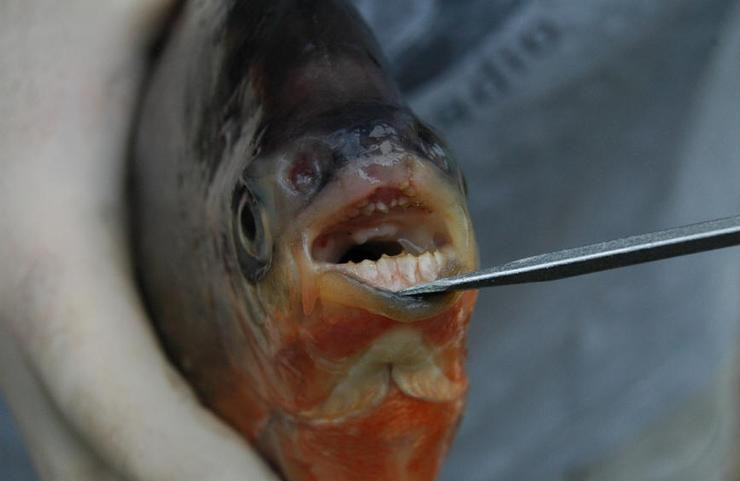 A South American fish with uncannily human-like chompers has been unexpectedly showing up on Michigan anglers' hooks.

The fish are red-bellied pacus (Piaractus brachypomus) and are piranha relatives, though their diet is mostly vegetarian. Pacus are popular with aquarium owners for their unusual square teeth that look remarkably human --rather disturbingly so, in fact. But recently, pacus have been sighted in places where they shouldn't be: Lake St. Clair and Port Huron in southeastern Michigan, where three pacus were caught during the month of July.

The pacus were almost certainly introduced into the lakes by former owners who kept them as pets, according to a statement released Aug. 9 by the Michigan Department of Natural Resources (DNR). [Photos: The Freakiest-Looking Fish]

Pacus are native to the Amazon and Orinoco river basins and flood plains. Their flattened bodies resemble those of their sharp-toothed piranha cousins, but their own distinctive teeth are used for crushing seeds and nuts. Pacus can grow to be about 35 inches in length, and pet owners may be dismayed to find that their exotic pet can outgrow its tank, which can prompt them to release the fish in the wild, according to the DNR.

Warm temperatures are vital to the pacus' survival, so they are unlikely to become established as an invasive species in Michigan's seasonally cold waters. However, releasing pets in the wild is not only harmful to the animals and likely to result in their death, but could have severe implications for native wildlife and ecosystems, DNR officials said in the statement.

Pacus have been found in Michigan waters before, but this is the first time that people have caught three of them in one week, according to Nick Popoff, a biologist with the Fisheries Division at the DNR. Popoff told Live Science that it's possible the three fish came from a single tank that was dumped in a public access site.

"Pacus' temperature requirements are tropical, and Michigan is not a tropical state," Popoff said. "They're not going to be able to survive our winters, so we don't consider them invasive. We're concerned with this because it highlights the issue of pet owners releasing their pets into the wild."

Goldfish have also been released into Michigan lakes by their owners, but unlike the pacu, they survive year-round and are successfully breeding.

In addition to Michigan, at least 26 other states in the U.S. have reported pacu captures in the wild, the DNR said.

"Invasive species are extremely damaging -- to Michigan, the Great Lakes, even globally. But the message here is more about individual responsibility," Popoff told Live Science. "Releasing that fish into the wild -- you're killing it, even if you don't think you are."