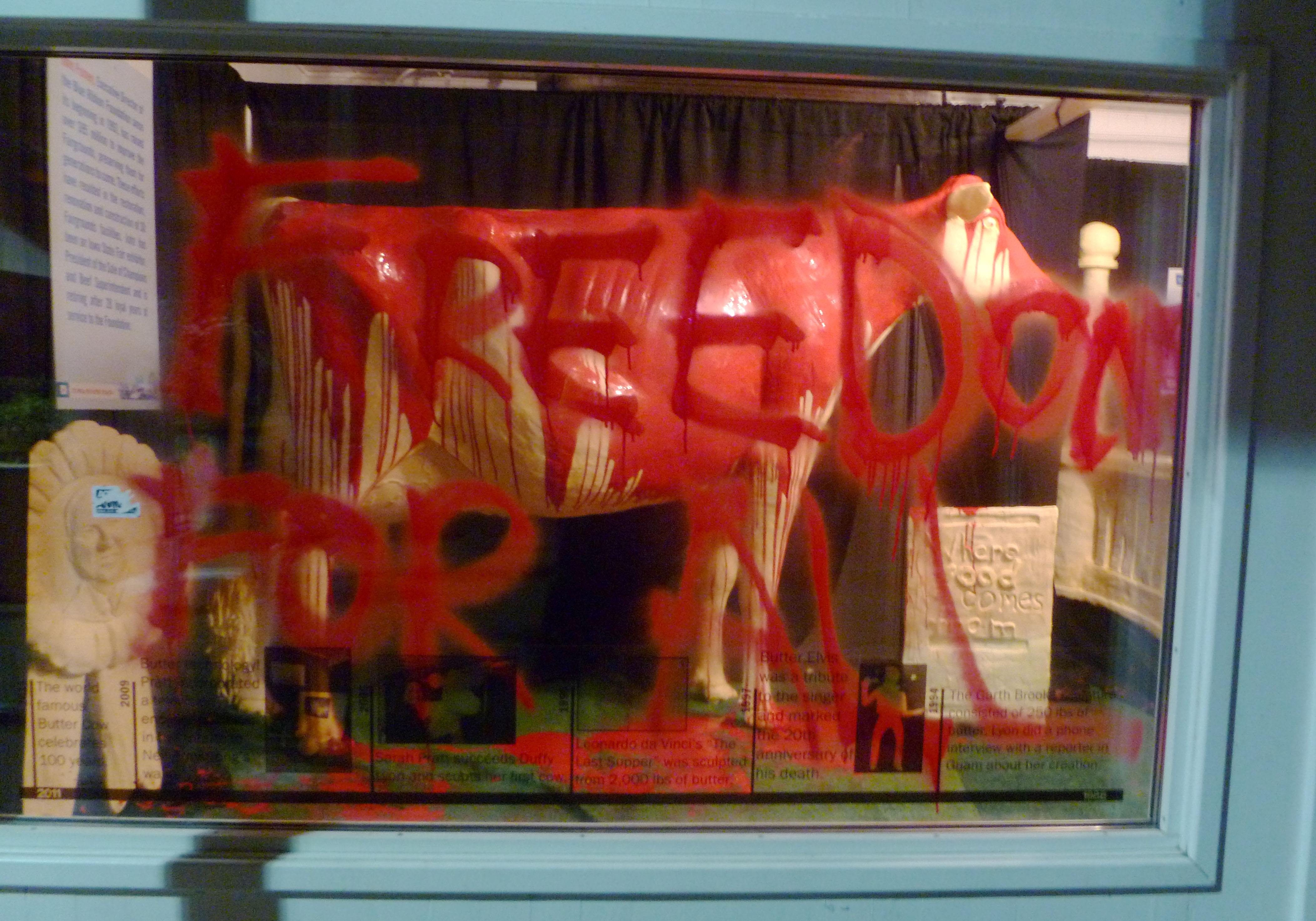 DES MOINES, Iowa An animal welfare group intent on sending a message in support of veganism hid until closing time then poured red paint over the Iowa State Fair's butter cow. But the damage was quickly scraped away and visitors never knew the iconic sculpture had been damaged.

Iowans for Animal Liberation claimed responsibility for the attack in a news release emailed Sunday night, saying members hid in the cavernous Agriculture Building on Saturday night and emerged after the fair closed for the day. They then broke into a refrigerated room where the sculpted cow and other butter sculptures are displayed and poured red paint over the cow.

The words "Freedom for all" were scrawled on a display window.

"The paint represents the blood of 11 billion animals murdered each year in slaughterhouses, egg farms, and dairies," the group said in the statement. "We intend this action to serve as a wake up call to all who continue to consume meat, dairy, eggs, leather, and all animal products: You are directly supporting suffering and misery on the largest scale the world has ever known."

Iowa State Patrol Sgt. Scott Bright said Monday that fair staffers discovered the damage Sunday morning. A sculptor scraped off damaged sections of the cow and reapplied new butter while other workers cleaned off paint elsewhere in the room.

The display area, which this year also features a sculpture of Abraham Lincoln and a depiction of the Lincoln Highway that crosses Iowa, opened as usual at 9 a.m. Sunday.

The cow, which is made with about 600 pounds of butter covering a wood and metal frame, has been a part of the fair since 1911. The butter is reused for up to 10 years.

Describing the vandalism as "more of an inconvenience than anything else," Bright said security procedures at the 450 acres fairground in east Des Moines would remain the same. He noted the Agriculture Building, built in 1904, has plenty of hiding places and is usually packed with people, many of whom gather around the butter cow display.

"Everyone comes out to see the butter cow," Bright said. The fair typically attracts more than 1 million visitors annually.

"The butter cow looks good now and everything is back to normal," he said.