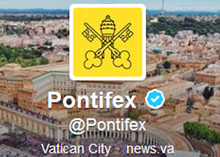 "Habemus papam franciscum," tweeted the pope's official account @Pontifex. The Latin phrase translates to "we have a new pope [Francis]."

The Twitter account for the Vatican was changed to reflect that a new pope had been chosen shortly after it was announced from the balcony of St. Peter's Basilica in Vatican City.

After just a day and a half, the 115 cardinals eligible to vote elected the new pope. White smoke emerged from the chimney of the Sistine Chapel at about 2 p.m. ET, signifying that at least 77 cardinals agreed on a successor for Pope Benedict XVI.

Jorge Mario Bergoglio, Archbishop of Argentina, has been named the 266th pope. He will be called Pope Francis.

Soon after it was made known that a new pope was elected, the official Twitter page of the pope was changed from "Sede Vacante" -- an expression to signify the papacy is currently vacant -- to "Pontifex."

Benedict posted his last tweet at 11 a.m. ET on Feb. 28, as he prepared to leave the Vatican for Castel Gandolfo. Benedict's final message to the world's 1.2 billion Catholics said: "Thank you for your love and support. May you always experience the joy that comes from putting Christ at the centre of your lives."

​No holes in your Swiss cheese? Here's why
Chenda Ngak