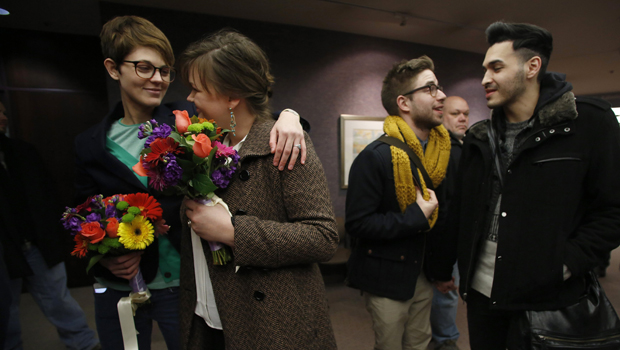 SALT LAKE CITY - Utah will not recognize, at least for now, the marriages of gay couples who rushed to wed after a federal judge's ruling briefly rendered gay unions legal in the conservative, predominantly Mormon state, the governor's office said on Wednesday.

The state's decision comes as a blow to roughly 1,400 same-sex couples who legally tied the knot after U.S. District Judge Robert Shelby ruled on Dec. 20 that a state ban on gay marriage violated the U.S. Constitution. His ruling was later put on hold by the U.S. Supreme Court pending an appeal.

"Based on counsel from the Attorney General's Office regarding the Supreme Court decision, state recognition of same-sex marital status is ON HOLD until further notice," Governor Gary Herbert's chief of staff said in a message posted to state officials on the website of the Republican governor.

Utah temporarily became the 18th U.S. state to permit gay marriage when Shelby ruled for three same-sex couples in a lawsuit challenging a voter-passed amendment to the Utah constitution that defined marriage as exclusively between a man and a woman.

The U.S. Supreme Court issued a stay on Monday, pending appeal of the ruling, preventing new same-sex marriages from being performed in the state. Following that decision, married same-sex couples who wed after Shelby's decision expressed concern the state might not recognize their marriages as valid.

Among them were Angela Hinton and Michele Poast. They have been together for nine years and married after Shelby voided Utah's gay marriage ban because it violated constitutional guarantees of due process and equal protection.

"Are we valid or are we not?" Hinton, 41, said on Tuesday. "With the stay, it feels like we don't have continuity."

Hinton, a mental health therapist from Hurricane, Utah, who also teaches a college class on marriage and family, could not immediately be reached after the governor's office released its statement.

Shelby's ruling jolted many of Utah's 2.8 million residents, nearly two-thirds of whom are members of The Church of Jesus Christ of Latter-day Saints, which teaches that traditional marriage is an institution ordained by God.

The governor's office, in explaining how the state would handle the existing marriages, said that state agencies should follow "current laws that prohibit the state from recognizing same-sex marriages."