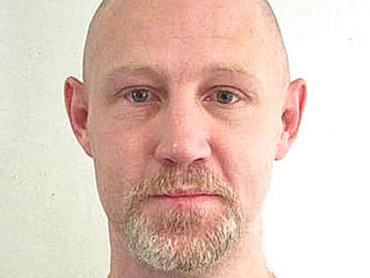 DRAPER, Utah (CBS/AP/KUTV) At 12:17 a.m. Friday, convicted killer Ronnie Lee Gardner was pronounced dead after a Utah firing squad fired a volley of bullets into the murderer's chest, where a target was pinned over his heart. It was the first execution by firing squad in the United States in 14 years.

At a press conference held about an hour after the execution, witnesses from various press agencies described in detail what they saw. Fields Moseley, a reporter for CBS affiliate KUTV, was a witness to the execution, and at the press conference he stated that he felt the shooting death was very violent and not at all clinical. Other reporters, however, felt differently and described the scene as almost sanitary.

All press witnesses made reference to Gardner clenching his hand from the moments right before the shooting and until the curtain was drawn on the witness viewing rooms. At one point after the shooting Gardner's hand relaxed and then tensed up again according to witnesses.

In an eyewitness account, Associated Press reporter Jennifer Dobner wrote, "There was no blood splattered across the white cinderblock wall at the Utah State Prison. No audible sounds from the condemned. I couldn't see his eyes. I never saw the guns and didn't hear the countdown to the trigger-pull."

Gardner, when given the opportunity to say any last words, replied "I do not, no." A black hood was then fastened over his head, and shortly thereafter the executioners followed a count down from five to two and then fired the shots that ended Gardner's life.

As Gardner was shot, about two dozen members of Gardner's family held a vigil outside of the Utah State Prison in Draper, south of Salt Lake City. "He didn't want nobody to see him get shot," said Gardner's brother, Randy Gardner. "I would have liked to be there for him. I love him to death. He's my little brother."

The executioners were all police officers who volunteered for the task and remain anonymous. They stood about 25 feet from Gardner, behind a wall cut with a gunport, and were armed with a matching set of .30-caliber Winchester rifles. One was loaded with a blank so no one knows who fired the fatal shot. Sandbags stacked behind Gardner's chair kept the bullets from ricocheting around the cinderblock room.

Gardner was sentenced to death for the fatal shooting death of Utah attorney Michael J. Burdell during an escape attempt and shootout at the old Metropolitan Hall of Justice in downtown Salt Lake City on April 2, 1985.

Although he was handcuffed and surrounded by prison guards, a female acquaintance slipped Gardner a loaded, long-barreled .22-caliber handgun in the basement of the building just before the shooting. He shot Burdell in the head, wounded a court bailiff and was himself shot in the right shoulder before being captured on the courthouse lawn as he tried to flee.

Gardner and his defense attorneys fought to stop the execution to the end. They filed petitions with state and federal courts, asked a Utah parole board to commute his sentence to life in prison without parole, and finally appealed to Utah Gov. Gary Herbert and the U.S. Supreme Court.

Gardner spent his last day sleeping, reading the novel "Divine Justice," watching the "Lord of the Rings" film trilogy and meeting with his attorneys and a bishop with the Mormon church. A prison spokesman said officers described his mood as relaxed. He had eaten his last requested meal - steak, lobster tail, apple pie, vanilla ice cream and 7UP - two days earlier.

Gardner walked willingly to his execution.