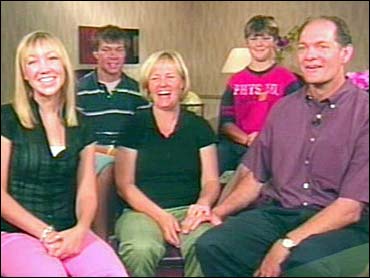 As Brennan Hawkins spent days lost in the Utah wilderness, the boy said he kept two thoughts in mind, both of them instructions from his parents: Never leave a trail and never talk to strangers. So, when people on horseback appeared on his trail Tuesday, Brennan pulled off the path and out of view until they passed.

"He had in his mind two things to do and that was to stay on the trail and to not talk to strangers and he did that for as long as his little body would possibly let him do that," his mother, Jody Hawkins, said on CBS News' The Early Show.

"I think that what kind of drove him was his fear that somebody was going to take him," his father, Toby Hawkins, told Early Show co-anchor Harry Smith.

The Hawkins also described their own ordeal Wednesday during news conferences at their suburban Salt Lake City home. Brennan answered only one question, saying he felt "good," then crouched on the ground by his mother's knees while his parents and four siblings carried on with the news conference.

Some other clues to what led to Brennan's four-day odyssey have emerged, though the boy has revealed few details: Factors include his partner's failure to follow a key Scout rule to always look out for your buddy, a wrong turn Brennan took in the woods and the boy's strict adherence to parental advice to avoid strangers — in this case rescue workers.

It all began when Brennan was slow to wiggle out of his body harness at a climbing wall, his 11-year-old buddy yelled "catch up with me" and ran for a steak dinner with Boy Scouts.

That's the last anyone saw of him before he took a wrong turn at a Scout camp and spent four days wandering the Utah wilderness before a rescuer found him in good condition Tuesday.

Under Scout rules, Brian Christensen and Brennan were supposed to keep an eye on each other, but Brian said he figured Brennan wasn't far behind on a quarter-mile jog along a familiar camp road. Brian said he'll never again let a buddy out of his sight.

Brian's father, Martin Christensen, was the Scout leader who invited Brennan to join his own 11-year-old son on a training outing for older scouts at the Boy Scout camp in the Uinta Mountains, about 60 miles east of Salt Lake City.

Brennan does not remember much of the time he was missing. He has said he drank stream water but had no food for four days and spent nights huddled with his sweat shirt pulled over his legs.

Christensen has reconstructed the boy's most probable route after pouring over topographical maps, reviewing search tactics and getting what answers he could out of Brennan.

Christensen determined Brennan immediately took a wrong turn from the 60-foot chipboard climbing wall, walking toward his tent camp instead of the mess trailer. When he realized his mistake, he doubled back through some burned woods but took another wrong turn at the first trail he came across, the Smith's Fork Trail.

What followed surprised rescue professionals: Brennan followed the steep trail out of a narrow river valley where the Boy Scout camp is hard to miss, climbing 400 feet over a mountain ridge and farther away from the roaring East Fork of the Bear River.

"He defied the convention. He went way uphill," Christensen said. "Ninety percent of kids who get lost will go downhill, and you will find them within the first hours or a day of a search."

Brennan's journey was about five miles by foot by the time he was found, but he probably spent time going back and forth and testing side paths, stopping for occasional rest, Christensen said.

It wasn't until Forrest Nunley surprised Brennan shortly afterward on an ATV that the boy was found. Nunley, a 43-year-old house painter from Salt Lake, was not part of the organized search and was looking outside designated search areas.

CBS News Correspondent Sandra Hughes reports it was faith that compelled many of the 3,000 people from the community to drop everything to search for him.

Brennan's father also said that Brennan said a prayer when he first got lost. His parents said all along they survived on their strong Mormon faith, Hughes reports.

Jody Hawkins, her voice breaking, said, "When they told me Brennan was still alive and in good shape — my brain still cannot comprehend that."

She described to Smith what it was like to wake up this morning and not be in the mountains searching for Brennan anymore.

"We were so afraid that we would go downstairs and he wouldn't be there," said Jody Hawkins. "We went down and looked at him. It was just so unreal that he was home in his bed and all these days that's all we wanted him to do was be home in his bed."

Brennan's mother said he believes he was gone only one or two nights, and "most of it was a blur to him."

The parents said they do not plan to push Brennan for answers about his time in the woods and referred reporters to Christensen. The couple said their son was born prematurely and described him as immature and a little slow, although not mentally disabled.

"I think as the story unravels itself we'll find out that there were probably rescuers that came very close to him in the search process," Toby Hawkins said.

Toby Hawkins said a lesson of this ordeal was that he didn't stress enough how their family code word, "BYU," could be used in situations like this.

"Maybe we should have said 'Brennan, BYU' and maybe he would have felt the security," he told Smith.

When asked about any special requests Brennan made after his ordeal, his sister Mariah said that he asked for fruit, vegetables and spinach in the ambulance.

"He's actually a really healthy kid. I don't know how many people are going to believe this," she said.