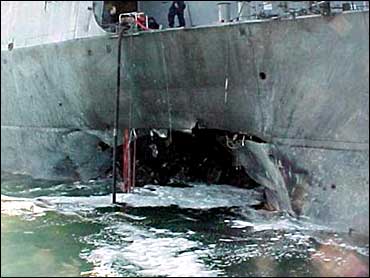 Security forces have arrested a Yemeni man suspected of involvement in the 2000 bombing of the USS Cole that killed 17 American sailors, a security official said Thursday.

The official, speaking on condition of anonymity, said the man played a major role in the attack that saw two suicide bombers ram an explosives-laden boat into the destroyer in the harbor of Aden.

The man was identified only by his surname, al-Nagar. It was not immediately clear what his exact role was in the Oct. 12, 2000, attack, which has been blamed on Osama bin Laden's al Qaeda network.

Al-Nagar was arrested earlier this month in a house in Lawdar, a town 155 miles southeast the capital San'a, the official said.

He alleged that al-Nagar was a middleman between the suicide bombers and al Qaeda sympathizers in the town of Bouraiga who helped acquire the boat used in the attack.

Police arrested two other wanted al Qaeda militants from Yemen in the same town this month.

Yemen, a conservative country at the southern tip of the Arabian peninsula, is bin Laden's ancestral homeland and has long been a hotbed of militant activity.

The country's government, however, allied itself with the United States following the Sept. 11, 2001, terrorist attacks, which have been blamed on al Qaeda. The government has also allowed U.S. forces into Yemen to train its military to combat militants.

In November, Yemeni security forces captured one of the top al Qaeda members in the country, a suspected mastermind of the bombings of the Cole and a French oil tanker off the country's coast. Mohammed Hamdi al-Ahdal was arrested after Yemeni forces surrounded his hide-out west of the capital.

Last May, the U.S. Justice Department indicted two fugitives for alleged links to al Qaeda and roles in the deadly October 2000 attack.

The 50-count indictments charge Fahd Mohammed Ahmed Al-Quso and Jamal al-Badawi not only with a hand in the attack on the Cole, but also with an aborted attempt to bomb another American vessel, the USS The Sullivans, ten months earlier.

Both men were among the ten suspects who escaped Yemeni custody and were recently recaptured.