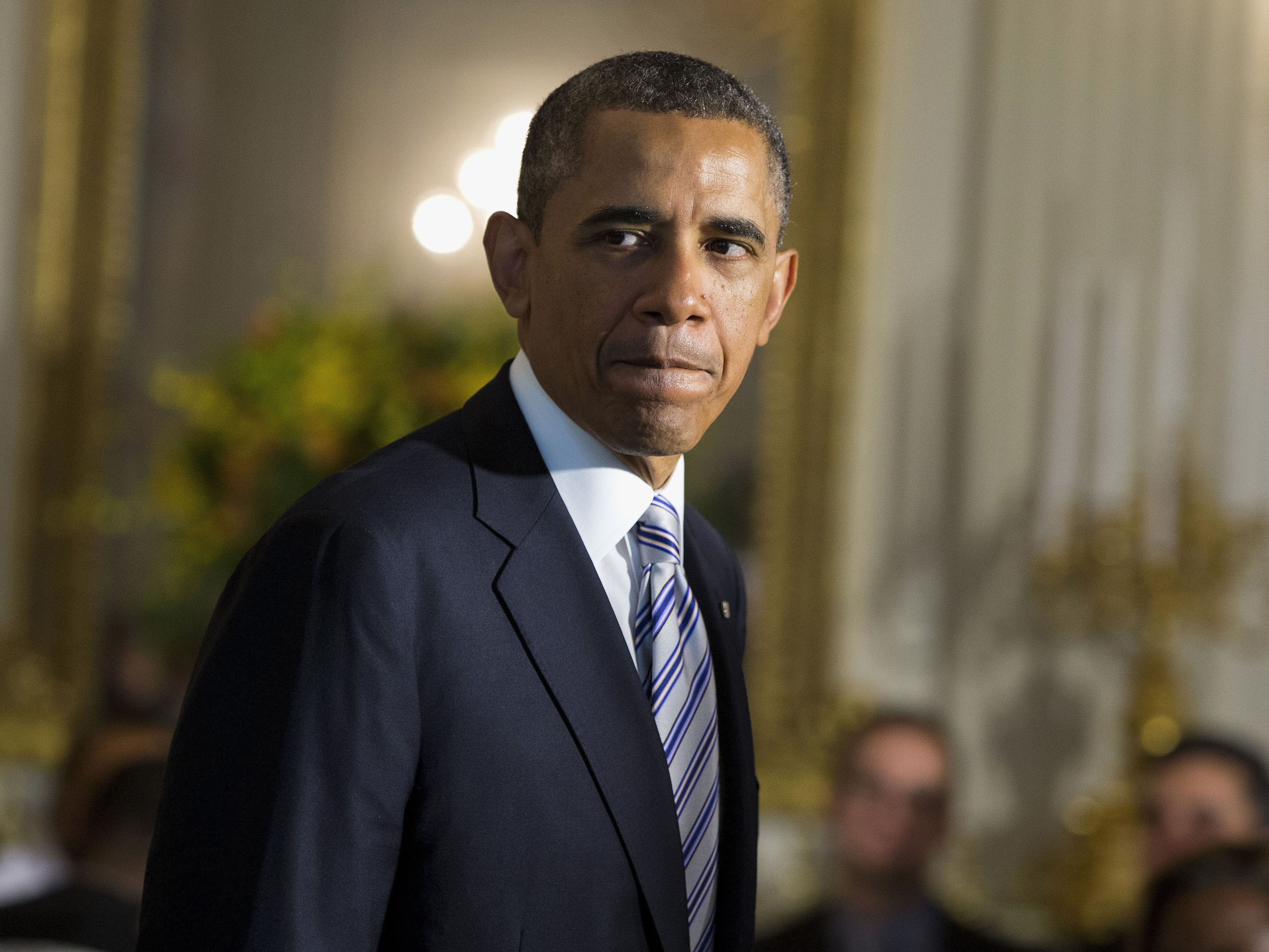 WASHINGTON The U.S. has said it will begin supplying arms to select Syrian rebels in an effort to turn the tide in their struggle to oust dictator Bashar Assad, but President Obama still faces a tough sell to fellow world leaders skeptical that such a course is the best way to end the bloody, two-year civil war.

The Obama administration cited evidence that the Syrian government used chemical weapons on multiple occasions against its own people as the impetus for its decision to give lethal aid to the rebels. But the international reaction has ranged from flat-out disbelief of the U.S. intelligence assessments to calls for negotiation before more weapons pour into the vicious conflict.

On Friday night, President Obama held an hour-long video conference with British Prime Minister David Cameron, French President Francois Hollande, German Chancellor Angela Merkel and Italian Prime Minister Enrico Letta in a clear attempt to build up a consensus on Syria ahead of the G8 meetings beginning Monday, where Mr. Obama will meet with Russian President Vladimir Putin, one of the staunchest opponents to arming the rebels.

Russia has already rejected U.S. claims on Assad's chemical weapons use and previously has blocked proposed U.N. sanctions against Assad's regime. Moscow also acknowledged last month that it has contracted to supply advanced S-300 air-defense missiles to Syria. But Putin and other officials say the policies do not constitute overt support for Assad.

Speaking about the chemical weapons claims Saturday, Foreign Minister Sergey Lavrov scoffed at the suggestion in light of its apparent growing advantage against the rebels.

"The regime doesn't have its back to the wall. What would be the sense of the regime using chemical weapons, moreover at such a small quantity?" he said.

On Friday, Putin's foreign affairs adviser, Yuri Ushakov, invoked U.S. assertions about weapons of mass destruction in Iraq, a claim that proved false, in his dismissal of the latest American claim.

"I wouldn't like to draw parallels with the famous dossier of Secretary of State Colin Powell, but the facts, the information presented by the U.S. didn't look convincing," he said.

Ushakov also suggested that sending weapons to the opposition would diminish Moscow's interest in negotiations in Geneva.

"If the Americans make and fulfill a decision to provide a greater assistance to the rebels, to the opposition, it's not going to make the preparations for an international conference on Syria any easier," he said.

The Obama administration says it has "high confidence" that Assad's forces have killed up to 150 people with sarin gas. Although that's a tiny percentage of the approximately 93,000 killed in the civil war so far, the use of a chemical weapon crosses Mr. Obama's "red line" for escalating U.S. involvement in the conflict and prompted the decision to send arms and ammunition, not just humanitarian aid and defensive non-lethal help like armored vests and night goggles.

U.S. officials have not disclosed any details about the weapons they intend to send to Syria or when and how they will be delivered. CBS News correspondent David Martin reported Friday that the CIA would be responsive to rebel weapons requests for small arms ammunition and anti-tank weapons, but not anti-aircraft missiles.

CBS News chief White House correspondent Major Garret reports that the administration hasn't drawn up a specific list of weapons and don't want to make public a full inventory because if they do, the Syrian government will have a better chance of intercepting those weapons.

American Marines, along with F-16 fighters and air defense missiles, are currently conducting a training exercise in Jordan. The fighters and missiles are expected to stay behind when the exercise ends. But officials said the U.S. does not intend to establish a no-fly zone over Syria and Mr. Obama has consistently said he will not put American troops on the ground in Syria, making it less likely the U.S. will provide sophisticated arms or anti-aircraft weapons that would require large-scale training.

Skeptics of the U.S. policy shift may be fueled by the increasing presence of radical elements within the at-times fractious rebel movement and the concern that American weapons could fall into their hands. Deputy National Security Adviser Ben Rhodes expressed confidence Friday that the CIA could keep the aid away from extremists.

"We have relationships today in Syria that we didn't have six months ago. That gives us greater certainty that we can get stuff into the country, but also that we can put it into the right hands, so that it's not falling into the hands of the extremists."

But testifying before Congress in April, Chairman of the Joint Chiefs of Staff Gen. Martin Dempsey did not share that confidence.

"It is actually more confusing on the opposition side today than it was six months ago," he said then.

CBS News correspondent Elizabeth Palmer, who has reported extensively from inside Syria and has spoken with her contacts there following the Obama administration's decision, said it is "pretty much guaranteed" that some of the U.S.-supplied weapons will go astray, despite whatever safeguards the U.S. put in place.

"All sorts of methods have been discussed to keep track of [the weapons], right down to numbering the shells and distributing them to specific groups. But these groups fight with one another. [And] There's a thriving black market in arms. So it's going to be very hard - no, impossible - to keep track of them," Palmer said.

Despite their disagreement over chemical weapon use, the U.S. will continue to talk to the Russians about ways to achieve a political settlement in Syria, considered the best option by all.

"We have no illusions that that's going to be easy," Rhodes said.

Getting Western allies to increase support for the rebels won't necessarily be easy, either.

British Prime Minister Cameron has said he there is credible evidence of "multiple attacks" using chemical weapons by Assad's fighters, but indicated that al Qaeda-linked elements in the opposition movement had also attempted to acquire chemical weapons for probable use in Syria. Still, he restated the government's position that no decision had been taken to arm moderate rebels opposed to Assad. The Obama administration says it has no evidence the opposition has used chemical weapons.

French President Hollande told reporters Friday that the use of chemical weapons by Assad "confirms that we must exercise pressure on the regime." But Foreign Ministry spokesman Philippe Lalliot would not say whether the U.S. claim of chemical weapons adds momentum to arming rebels.

U.N. Secretary-General Ban Ki-moon, however, voiced opposition to the U.S. decision to send arms to the Syrian rebels. He said no one can be certain chemical weapons were used without an on-the-ground investigation. Increasing the flow of arms to either side "would not be helpful," he said

Washington's decision comes after several military setbacks for the rebels and as Lebanon's Hezbollah militia becomes increasingly involved, fighting alongside Assad's forces. The Iranian-backed Hezbollah's role was key in the capture of the strategic rebel-held town of Qusair earlier this month.

The U.S. has so far provided $250 million in non-lethal military and political aid to the Syrian opposition. The Obama administration has already told Congress that $127 million of this aid is in the pipeline. State Department spokeswoman Jen Psaki said Friday the administration now has notified Congress that the remaining $123 million in assistance, including body armor and other equipment such as night-vision goggles, is beginning to move to the Syrian rebels.

The plan to arm the rebels comes after a tricky assessment of which groups in the opposition the U.S. and allies can work with and which should be avoided.

"I think we know who the good guys are ... who we can trust and who we cannot," said Rep. C.A. Dutch Ruppersberger of Maryland, the top Democrat on the House Intelligence Committee. He received briefings from U.S. diplomats and intelligence officials in Jordan last month and visited a refugee camp at the Syrian border.

He said the U.S. aid will include weapons training and basic military tactics, and share intelligence to help guide the rebels to the right targets.

"Intelligence is a key component to helping the opposition warfighters to make sure they make the right decisions to turn the tide of this fight," said Ruppersberger.

The CIA has led U.S. outreach to the rebels from outside Syria, meeting rebels at refugee camps and towns along the Turkish and Jordanian borders. CIA paramilitary officers, as well as special operations trainers, have trained select groups of rebels in Jordan on the use of encrypted communications equipment — the nonlethal aid provided by the Obama administration — and they have helped the rebels learn how to fire anti-aircraft weapons and small arms provided by Gulf states.

"We've been looking at this for a long time now," said John McLaughlin, former acting director of the CIA. "You can do a pretty good diagram of who the rebel forces are, what the number of foreign fighters are. We've come to the conclusion that there is an acceptable level of risk, understanding we will lose control of some of the weapons."