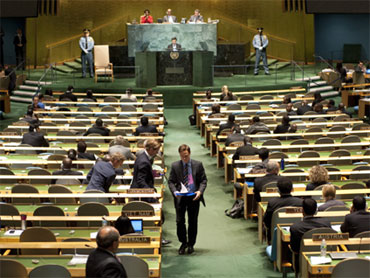 The U.S. delegation walked out of the U.N. speech of Iranian President Mahmoud Ahmadinejad on Thursday after he said some in the world have speculated that Americans were actually behind the Sept. 11 terror attacks, staged in an attempt to assure Israel's survival.

He did not explain the logic of that statement that was made as he attacked the U.S. wars in Iraq and Afghanistan.

Ahmadinejad said there were two theories about the Sept. 11, 2001 attacks:

- That a "powerful and complex terrorist group" penetrated U.S. intelligence and defenses.

- "That some segments within the U.S. government orchestrated the attack to reverse the declining American economy and its grips on the Middle East in order also to save the Zionist regime. The majority of the American people as well as other nations and politicians agree with this view."

The Americans stood and walked out without listening to the third theory that the attack was the work of "a terrorist group but the American government supported and took advantage of the situation."

Mark Kornblau, spokesman of the U.S. Mission to the world body, issued a statement within moments of Ahmadinejad's attack.

"Rather than representing the aspirations and goodwill of the Iranian people," he said, "Mr. Ahmadinejad has yet again chosen to spout vile conspiracy theories and anti-Semitic slurs that are as abhorrent and delusional as they are predictable."

The Iranian leader spoke of threats to burn the Quran by a small American church in Florida to mark the anniversary of the Sept. 11 terror attacks. Although that church backed down, several copycat burnings were posted on the Internet and broadcast in the Muslim world.

He briefly touch on the four sets of sanctions imposed on his country by the United Nations over Tehran's refusal stop enriching uranium and to prove Iran is not trying to build an atomic bomb.

Some members of the Security Council have "equated nuclear energy with nuclear bombs," Ahmadinejad said.

He accused the United States of building up its nuclear arsenal instead of dismantling it and reiterated his call for a nuclear-free world.

"The nuclear bomb is the worst inhumane weapon and which must totally be eliminated. The NPT (Nonproliferation Treaty) prohibits its development and stockpiling and calls for nuclear disarmament," the Iranian president said.

Earlier Thursday, former New York Mayor Rudolph Giuliani told cheering Iranian-Americans outside the United Nations that they have the support of "all democratic people."

The lively but controlled group protesting against Ahmadinejad's United Nations appearance, appeared on Dag Hammarskjold Plaza, across the street from the U.N. complex. Several other organizations were holding separate protests there.

The protest was organized by the National Council of Resistance of Iran. The France-based umbrella group includes the People's Mujahedeen Organization of Iran, which was removed from the European Union's list of banned terrorist groups last year. It remains on the U.S. list, though the group is trying to persuade the American government to stop classifying it as a terrorist organization.

A couple thousand demonstrators turned out, though organizers claimed the number was much higher. The protesters held purple balloons; red, white and green Iranian flags; and red, white and green umbrellas to ward off the hot autumn sun. Some had confetti. There was a huge papier-mache replica of Ahmadinejad's head with a nuclear missile strapped to the back. Many wore purple, which one of the organizers, Ali Safavi, called "the color of democracy."

Some signs decried adultery stonings, while others said "Down with the Islamic Republic of Iran" and "Off the List," a reference to the exile list.

"Your goals are our goals," Giuliani said. "They are the goals of all democratic people. You want to see freedom of religion ... of the press.

"We must confront tyrants, oppressors, bullies and terrorists as early as possible," he said, prompting even louder cheers.

"I am here to be the voice of the opposition for Iran," said participant Neda Farhan, who came with a group from Washington. "In the election, many young people were arrested and they are still in prison and we must fight for their rights."

The protest was peaceful, and 40 to 50 police officers watched nearby.