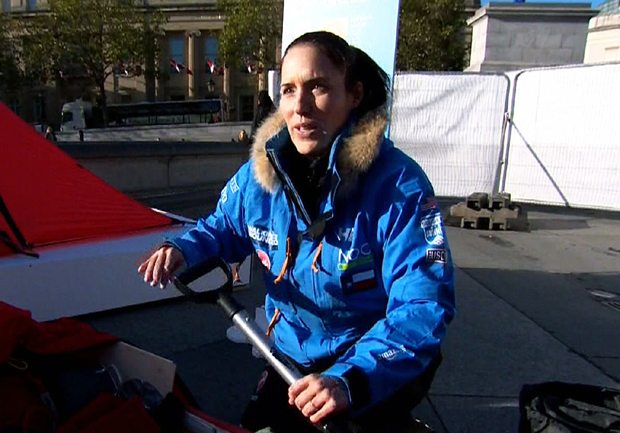 LONDON -- Iraq war veterans Margaux Mange and Therese Frentz served in different military branches in Baghdad, but when the Americans teamed up for the Walking with the Wounded South Pole expedition, they discovered they had something in common: post-traumatic stress disorder (PTSD).

"I didn't ever think I would be able to have a strong friendship with anyone who'd been injured. But the first time that I met Therese Frentz, I said, 'Ah, another female that I actually bond with!'" said Mange, who developed PTSD after surviving two Iraq road bomb attacks that killed her best friend and two others. "We don't even have to talk about anything, I just know that she has my back and I have hers."

Frentz and Mange are on the American team competing in the four-week, 200-plus mile trek to Antarctica. The three-team charity race aims to raise money and awareness for disabled veterans transitioning back to civilian life. Much of the focus is on veterans with physical disabilities like limb amputations or blindness.

"Even when you've lost a leg, or an arm or whatever the illness, you can achieve pretty much anything when you put your mind to it," British team member Prince Harry told reporters at a race kick-off event in London.

Mange and Frentz want their participation in the South Pole challenge to bring attention to the "invisible injury" of war - mental illness.

Mange was in therapy for depression and anxiety and taking anti-depressants for five years. She says the friendship she found in Frentz and her other Walking with the Wounded teammates in their year-long preparation for the expedition helped her come off medication and live a fuller life. She says she signed up for the race, to encourage others.

"I'm one of the very few participants who have mental illness - the invisible injury," Mange says. "By going on the expedition and sharing my story, I am hoping to reach thousands of injured veterans in saying that you can get help. You can go to a psychiatrist or even just talk to another veteran. We know your story. We want to be your friend - and that is the first step to recovery."

Former U.S. Air Force Lieutenant Therese Frentz was nearly killed in a suicide bombing nine years ago in Iraq. She suffered burns on over one third of her body - the disfiguring scars on her arms and torso led her into a deep depression.

At left, watch Frentz discuss the equipment she will be hauling on her trek to the South Pole.

"I was only 24-years old at that time [of the bombing] and single," Frentz said. "I was just thinking I was damaged goods and no one would ever love me - and that the military career I thought I would have changed obviously."

She went through therapy and took medication to get through what she calls "the tough times." But she signed up for the South Pole competition as motivation to get back into shape and to start feeling better about herself.

"Now I am working out to keep alive and survive in the Antarctic - that's a big boost," she said.

Frentz and Mange say by being open about their mental health challenges, they hope to help change the perception of PTSD, and remove the stigma around seeking help to recover from it.

"A lot of people in the military don't want to admit going to therapy, even when something horrific happens to them," Frentz says.