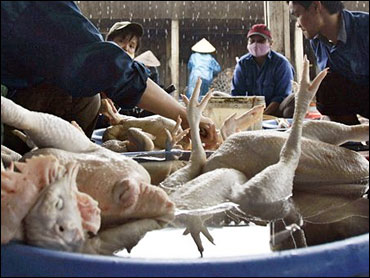 Meanwhile, Vietnam banned raw blood pudding and poultry-raising in major cities as Asian governments stepped up measures to prevent a potential human outbreak. A Chinese drug company was in talks with the Swiss maker of the anti-flu drug Tamiflu about the possibility of producing it in China.

"If countries overreact and are overly punitive in their reaction when this disease is reported, that reduces the incentive for other countries to report," Lambert said at a news conference.

China and Vietnam both have banned poultry imports from countries with outbreaks. Vietnam has suffered more than 40 of the 62 human deaths from bird flu in Asia since 2003, while China has had three outbreaks in birds in recent weeks but no human cases.

Lambert said U.S. producers sell $500 million worth of poultry a year to China.