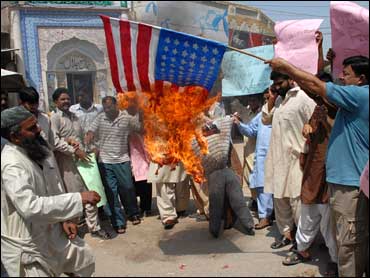 Pakistan's military chief on Wednesday lashed out at the United States over cross-border raids by American troops from Afghanistan and said his country's sovereignty will be defended "at all cost."

He said the move was covered by no agreement between Pakistan and U.S.-led forces in Afghanistan and risked stoking militancy in a region that Washington regards as an intolerably safe haven for al Qaeda and Taliban militants.

"Falling for short term gains while ignoring our long term interest is not the right way forward," Kayani said, according to the statement released through the military's media wing.

"To succeed, the coalition would be required to display strategic patience and help the other side the way they want it, rather than adopting a unilateral approach," he added.

The Pakistani government already hauled in the U.S. ambassador to Islamabad to lodge a stiff protest over a highly unusual raid by helicopter-borne grounds troops that residents said killed about 15 people.

U.S. officials have acknowledged that American troops carried out the operation, but have provided no details. The objective and results of the mission remain unclear.

Along with a barrage of suspected U.S. missile strikes into Pakistan's border zone, the raid indicates that Washington is getting more aggressive against militant targets beyond Afghanistan's frontier, despite the political fallout in Pakistan, a key U.S. ally.

A U.S. missile strike Monday in the North Waziristan tribal region destroyed a seminary and houses associated with a veteran Taliban commander and killed 20 people, including some women and children as well as four foreign militants, officials said.

The tribal belt is considered a possible hiding place for Osama bin Laden and al Qaeda No. 2 Ayman al-Zawahri.

Three Pakistani intelligence officials identified the foreign militants as Abu Qasim, Abu Musa, Abu Hamza and Abu Haris. The officials spoke on condition of anonymity because of their jobs' sensitivity.

Abu Haris led al Qaeda efforts in the tribal areas, while Abu Hamza led activities in Peshawar, the main northwest city, according to the intelligence officials, who said they got the details from informants and agents in the field.

An Arab diplomat based in Pakistan with responsibilities including intelligence gathering cautioned against putting too much value in the strike, regardless of who may have been killed by the missiles.

"Al Qaeda may be moving already to replace these characters who have been killed," said the diplomat, who spoke to CBS News' Farhan Bokhari Wednesday on condition of anonymity.

Lets be clear about one thing; It is impossible to tell if one guy is head of al Qaeda operations in the tribal areas or in Peshawar... There is no single al Qaeda operation commander anywhere. If one fellow goes down another comes up. Al Qaeda is more like a tradition or a cult where one individual after another doesn't matter. I am sure, unless decimated otherwise, al Qaeda will continue even after bin Laden. No one is immortal, but causes continue, they carry on," the diplomat said.

Abu Haris' nationality had yet to be confirmed, but Abu Hamza was from Saudi Arabia, the officials said. The other two - an Egyptian and a Saudi - appeared to be lower-ranking al Qaeda members.

Two U.S. officials said the strike was carried out by the CIA. The American officials spoke on condition of anonymity because they were not authorized to discuss CIA operations.

Parties that won February elections forced Musharraf to quit as president last month. The military, which has dominated Pakistan for much of its 61-year history, has said it will follow the lead of the new civilian government.

But in Wednesday's statement, Kayani let loose his first public criticism of American policy - a measure of the sensitivity surrounding U.S. military action on Pakistani soil, even in the tribal belt where the state has minimal control.

Kayani defended Pakistan's policy of seeking reconciliation in its wild tribal belt. He insisted the army was committed to eliminating militants, but said it had to be sure of popular support.

"Reckless actions" which kill civilians "only help the militants and further fuel the militancy in the area," he said.

"The sovereignty and territorial integrity of the country will be defended at all cost and no external force is allowed to conduct operations inside Pakistan," he said.

In the latest violence, the army said it killed more than 20 militants in Bajur, a tribal region next to the Afghan border where the military claims to have killed hundreds of fighters in recent weeks. Four soldiers also died, army spokesman Maj. Murad Khan said.

The army said security forces killed another 11 suspected militants in the Swat Valley, another northwest region where the military has been battling insurgents.

In the Dir region, also near the border, police said a bomb killed 10 people in a mosque. The motive was unclear.