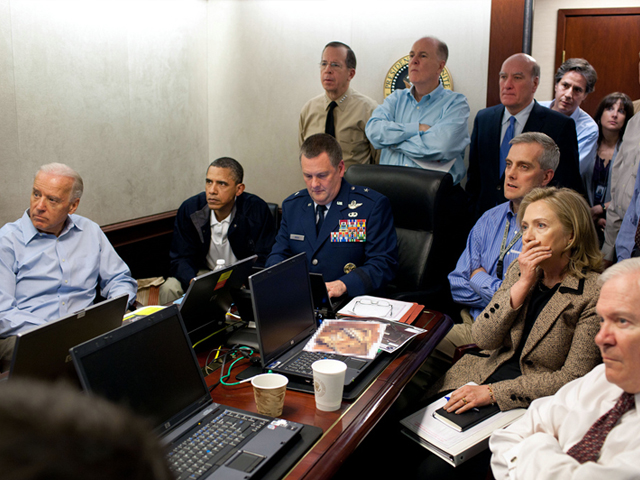 WASHINGTON - Still-secret photos of the dead Osama bin Laden show a precision kill shot above his left eye, a U.S. official said, as fresh details emerged of an audacious American raid that netted potentially crucial al Qaeda records as well as the body of the global terrorist leader. President Barack Obama is going to the site of the former World Trade Center in New York to mark the milestone and remember the dead of 9/11.

The administration weighed whether to release photos of bin Laden's corpse and video of his swift burial at sea. Officials were reluctant to inflame Islamic sentiment by showing graphic images of the body. But they were also eager to address the mythology already building in Pakistan and beyond that bin Laden was somehow still alive.

U.S. officials say the photographic evidence shows bin Laden was shot above his left eye, blowing away part of his skull. He was also shot in the chest, they said.

White House counterterrorism adviser John Brennan told "The Early Show" that the release of additional photographs, video or other evidence of bin Laden's death will be weighed in light of possible retaliatory actions taken by bin Laden's adherents.

"One of the things we have the responsibility to do is to make sure we take measures to guard against any type of adverse reaction to the news of bin Laden's death," Brennan said.

"We have put out the results of the DNA testing, the facial recognition, details about the raid itself, [and] what we're doing now as far as exploitation of materials that we found. ... We've done that in a prudent way, overseas and in the homeland here. So in the coming days, we'll continue to look at releasing additional information.

"So any type of a photographic or video material that we have, we're looking at it carefully to put it out, to make sure it is in the right condition - and also to understand what the implications are of such release.

"Al Qaeda has demonstrated throughout the years that it is intent on carrying out murderous attacks on innocent men, women, and children; they may try to use bin Laden's demise to try to justify these attacks," Brennan said.

Patience and persistence — characteristics normally attributed to al Qaeda — proved decisive in America's decade-long hunt for bin Laden, whose fate was sealed in 40 minutes of thunderous violence, years in the making.

According to the U.S. account, the assault team came away with hard drives, DVDs, documents and more that might tip U.S. intelligence to al Qaeda's operational details and perhaps lead the manhunt to the presumed next-in-command, Ayman al-Zawahri. The CIA is already going over the material.

Mr. Obama, who approved the extraordinarily risky operation by Navy SEALs against bin Laden's Pakistan redoubt and witnessed its progression from the White House Situation Room, his face heavy with tension, reaped accolades from world leaders he'd kept in the dark as well as from political opponents at home.

Republican and Democratic leaders alike gave him a standing ovation at an evening White House meeting that was planned before the assault but became a celebration of it, and an occasion to step away from the fractious political climate. Mr. Obama plans to visit New York on Thursday.

"Last night's news unified our country," much as the terrorist attacks of Sept. 11, 2001, did, Republican House Speaker John Boehner said earlier in the day. Mr. Obama later appealed for that unity to take root as the U.S. presses the fight against a terrorist network that is still lethal — and now vowing vengeance.

The episode was an embarrassment, at best, for Pakistani authorities as bin Laden's presence was revealed in their midst. The stealth U.S. operation played out in a city with a strong Pakistani military presence and without notice from Washington. Questions persisted in the administration and grew in Congress about whether some elements of Pakistan's security apparatus might have been in collusion with al Qaeda in letting bin Laden hide in Abbottabad.

In an essay published Monday by The Washington Post, Pakistani President Asif Ali Zardari denied suggestions his country's security forces may have sheltered bin Laden, and said their cooperation with the United States helped pinpoint the al Qaeda leader.

As Americans rejoiced, they worried, too, that terrorists would be newly motivated to lash out. In their wounded rage, al Qaeda ideologues fed that concern. "By God, we will avenge the killing of the Sheik of Islam," one prominent al Qaeda commentator vowed. "Those who wish that jihad has ended or weakened, I tell them: Let us wait a little bit."

In that vein, U.S. officials warned that bin Laden's death was likely to encourage attacks from "homegrown violent extremists" even if al Qaeda is not prepared to respond in a coordinated fashion now.

Bin Laden had lived at the fortified compound for six years, officials said, putting him far from the lawless and harsh Pakistani frontier where he had been assumed to be hiding out.

The only information about what occurred inside the compound has come from American officials, much of it provided under condition of anonymity.

They said SEALs dropped down ropes from helicopters, killed bin Laden aides and made their way to the main building. Obama and his national security team monitored the strike, watching and listening nervously and in near silence from the Situation Room as it all unfolded.

As the information from the operation flowed in, the president said, "We got him."

The hunt for bin Laden that ended Monday morning in Pakistan began years ago, when captured al Qaeda operatives first revealed the existence of bin Laden's most trusted courier. Some of the leads to the courier came out of the CIA's secret prisons, where high level al Qaeda captives were waterboarded.

CBS News correspondent David Martin reports that the courier was described as a protege of 9/11 mastermind Khalid Sheik Mohammed, and the man who delivered bin Laden's orders to al Qaeda operatives in the field. In fact, current and former U.S. officials said that Mohammed gave intelligence officials the courier's name. The CIA got similar information from Mohammed's successor, Abu Faraj al-Libi. Both were subjected to harsh interrogation tactics inside CIA prisons in Poland and Romania.

It was about four years ago that U.S. intelligence finally determined the courier's real name: Maulawi Abd al-Khaliq Jan. Take a look at it. It cost bin Laden his life.

Key to the hunt was identifying the cell phone number of the courier and placing it under surveillance. In 2010, the U.S. intercepted a call to the courier in which he was asked where he had been. He responded that he was back with the people he had been with before. The caller then said, "May God facilitate you" - the implication being that courier was back with bin Laden and his family.

The courier did not make it easy to locate the compound, however, since every time he approached the compound, he turned off his phone. He did this more than 90 minutes out and removed the battery, so he went totally dark and would leave it off when he was in the compound. When he left the compound, he would wait 90 minutes and turn it back on. Analysts would therefore keep seeing this pop up in places all over Pakistan but nowhere near to Abbattabod. This is why it took so long to find the compound after they had the name and the cell phone number for the courier.

It took another two years after identifying the courier to find out what part of Pakistan Maulawi Jan operated in. Then, last August, the CIA discovered his residence. Officials said they were shocked by what they saw - the specially constructed $1 million compound with walls as high as 18 feet topped with barbed wire.

The residents of the compound burned their trash instead of putting it out for collection and there was no telephone or internet service. Three families lived there: the courier's family, his brother's family, and a third family about the size of bin Laden's. It was a convincing but circumstantial case.

Once U.S. had located the compound where the courier lived, they put it under surveillance and noticed that every day a tall man emerged from the main house and walked for an hour around the courtyard. Imagery indicated that the man was between 5'8" and 6'5", but the photos were not good enough to make a positive identification. They were images from satellites and not drones, since location was too risky to deploy the unmanned aircraft.

U.S. counterterrorism officials considered bombing the place, an option that was discarded by the White House as too risky, particularly if it turned out bin Laden was not there.

Instead, Obama signed an order on Friday for the team of SEALs to chopper onto the compound under the cover of darkness.

In addition to bin Laden, one of his sons, Khalid, was killed in the raid, Brennan said. Bin Laden's wife was shot in the calf but survived, a U.S. official said. Also killed were the courier and his brother, and an unidentified woman, officials said.

Some people found at the compound were left behind when the SEALs withdrew and were turned over to Pakistani authorities who quickly took over control of the site, officials said. They identified the trusted courier as Kuwaiti-born Sheikh Abu Ahmed, who had been known under the name Abu Ahmed al-Kuwaiti.

Twenty-three children and nine women were in the compound at the time of the assault and were turned over to Pakistani authorities, said a U.S. official who requested anonymity to discuss an intelligence matter.

Within 40 minutes, the operation was over, and the SEALs flew out — minus one helicopter, which had malfunctioned and had to be destroyed. Bin Laden's remains were flown to the USS Carl Vinson, then lowered into the North Arabian Sea.