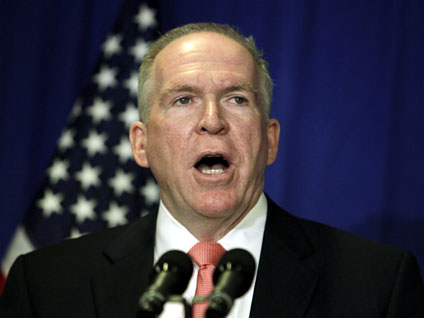 "If we had the opportunity to take bin Laden alive, if he didn't present any threat, the individuals involved were able and prepared to do that," Brennan told reporters during a press conference.

Brennan told reporters that the White House thought bin Laden would likely resist capture but that taking him alive was considered a "remote" possibility.

"We were not going to put our people at risk," Brennan said. "The president put a premium on making sure that our personnel were protected, and we were not going to give bin Laden or any of his cohorts the opportunity to carry out lethal fire on our forces."

Capturing bin Laden alive would have presented numerous uncomfortable challenges, CBS News correspondent Bob Orr reports. Where would he be held? Who would do the interrogation? Would the U.S. have to read him his rights?

Most counterterrorism experts did not view bin Laden as an exploitable source for intelligence, Orr reports. There was little chance he could substantively add to what the government knows about his organization. Beyond that, bin Laden, alive in captivity, would have added to his mythological standing among radical jihadis and would have presented an ongoing tool for radical recruitment.

Bin Laden was shot in the head and died in the firefight with the elite squad of American forces Sunday. Three adult men also died in the raid. A woman used as a human shield by one of the fighters at the compound also died.

One of the men killed was one of bin Laden's sons, whose name has not yet been released. There were no U.S. casualties.

CIA chief: Next 6 months will be "critical" in Ukraine war
Alex Sundby