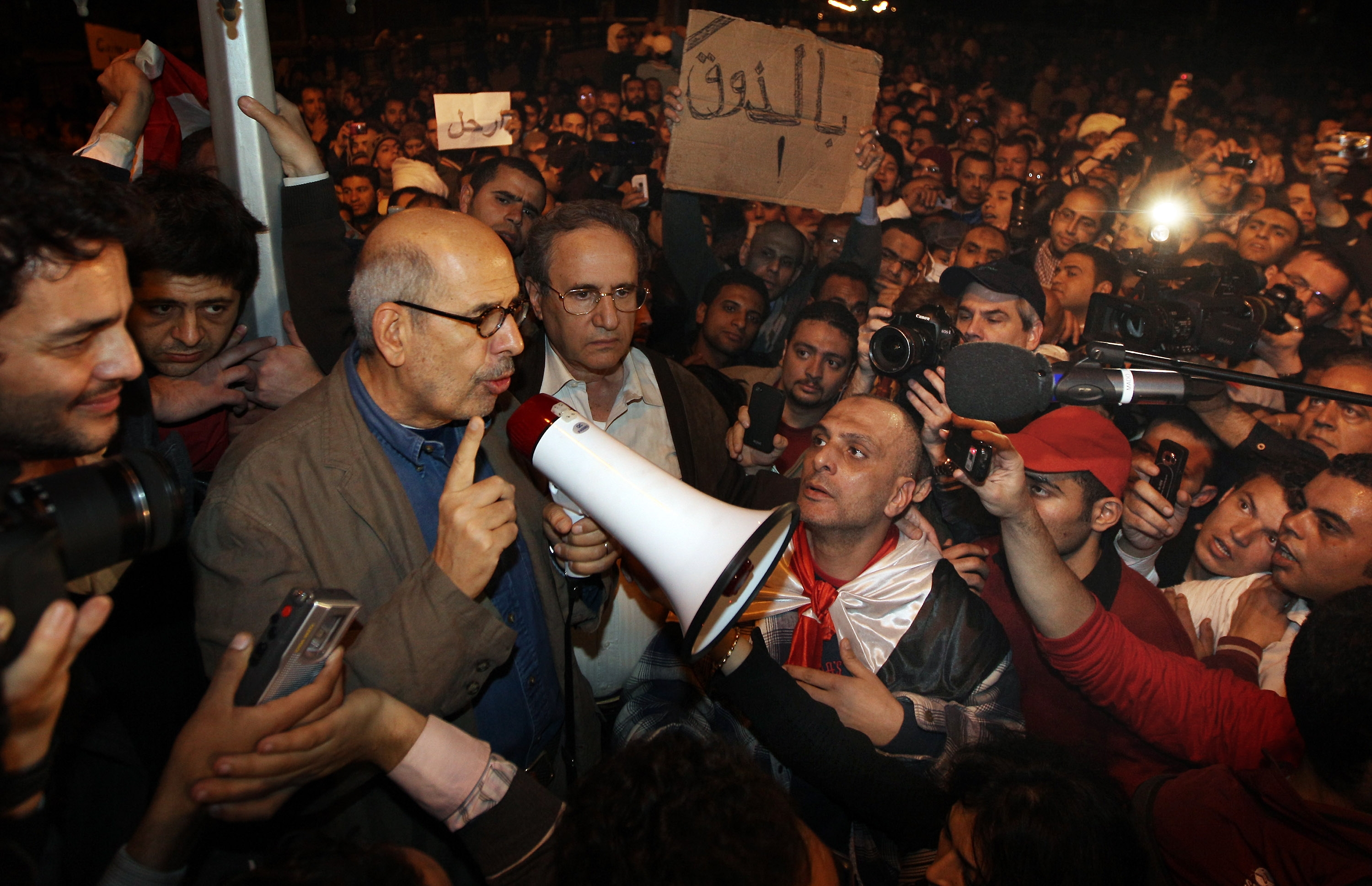 As it watched Egypt's unrest enter its second week and the pressure on President Hosni Mubarak to step down increase, the Obama administration is assessing who among the opposition it can support in the event Mubarak is unseated from power.

Helene Cooper and Scott Shane of The New York Times write that Mohamed ElBaradei had a contentious relationship with the Bush administration when, as director general of the International Atomic Energy Agency (IAEA), he contradicted Washington's claims of Iraqi weapons of mass destruction and criticized the U.S. invasion. Bush officials tried, and failed, to get him removed from the U.N.'s atomic watchdog agency.

ElBaradei and the IAEA were jointly awarded the Nobel Peace Prize in 2005.

Philip Zelikow, an Obama administration official, said ElBaradei's credibility within Egypt was earned in part by his clashes with the Bush administration.

"Ironically, the fact that ElBaradei crossed swords with the Bush administration on Iraq and Iran helps him in Egypt, and God forbid we should do anything to make it seem like we like him," Zelikow told The Times.

The paper notes that the 68-year-old law scholar has more in common with President Obama than with his predecessor. In addition to their shared opposition to the Iraq War - and their membership in the Nobel Laureate club - diplomatic cables obtained by WikiLeaks show ElBaradei was enthusiastic about Mr. Obama, praising the president's April 2009 speech on nuclear disarmament (which included some of ElBaradei's own proposals).

Other diplomatic cables reveal that when ElBaradei returned to Egypt for a visit last February, U.S. diplomats discussed the potential to serve as a point person for opposition groups, while noting his limitations ("Broader public support remains unclear"), and the ruling party's condescension of ElBaradei as an arrogant outsider who wanted the presidency handed him on a "silver platter."

But ElBaradei's views on other issues may make U.S. support of him more difficult.

Egypt has so far helped Israel enforce a blockage of Gaza, which is controlled by the militant group Hamas. But in a June 2010 interview ElBaradei demanded an end to the blockade, calling it "a brand of shame on the forehead of every Arab, every Egyptian and every human being."

And ElBaradei's criticisms of Washington did not end when President Bush left office. Appearing on CBS' "Face the Nation" last Sunday, ElBaradei chided the United States for having let the situation in Egypt get to this point.

"I have been warning of that for many years; many others have been seeing the painting on the wall. There was a tip point when things exploded," ElBaradei told Bob Schieffer. "If Washington didn't see that coming, then there was something wrong with their perception of what was going on in Egypt."

He also did not think remarks on the crisis by the Obama administration (which publicly pushed Mubarak to enact effective reforms but did not suggest he step down) were adequate.

"The American government cannot ask the Egyptian people to believe that a dictator who has been in power for 30 years will be the one to implement democracy. I mean, this is really a farce. I mean, people here could be poor, but they're intelligent."

The Associated Press has quoted unnamed American officials saying that the U.S. government would prefer that Mubarak not run for re-election. But the White House said emphatically that that position does not reflect administration policy, and on Monday Press Secretary Robert Gibbs said the United States is "not picking between those on the street and those in the government."

As a coalition of many opposition groups has taken to Egypt's streets - with ElBaradei as perhaps their most prominent figure - the Obama administration is now trying to decide if he is someone the United States can deal with - especially since the alternative could be a figure backed by the Muslim Brotherhood, the country's largest opposition group and one that has, so far, stayed in the background of the protests, conscious of jeopardizing secular support for the protests.

Gibbs said that while Obama administration officials have been trying to reach ElBaradei, they had not made contact as of Monday afternoon. "I think that outreach is ongoing," Gibbs said.

"He's a very modest, moderate man; he's not a natural politician," former State Department Jamie Rubin told CBS' "The Early Show." "But I do think it's possible that he could be a compromise candidate, as a transitional figure."

John Bolton, the United States ambassador to the United Nations under President Bush, routinely clashed with ElBaradei on the issue of Iran's nuclear program. He offered an opposing view of ElBaradei to the Times: "He is a political dilettante who is excessively pro-Iran."