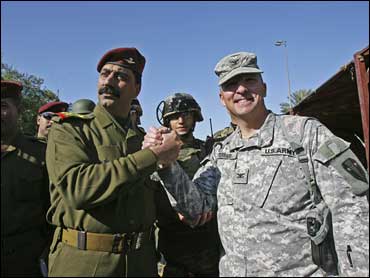 The United States handed over control of the Green Zone and Saddam Hussein's presidential palace to Iraqi authorities on Thursday in a ceremonial move described by the country's prime minister as a restoration of Iraq's sovereignty.

At a ceremony marking the transition, Nouri al-Maliki said he will propose Jan. 1 be declared a national holiday to commemorate what he called "Sovereignty Day" - the day Iraq took the lead in security away from U.S. forces, regained control of its airspace and reclaimed a wide swath of Baghdad's heavily fortified Green Zone. Iraq already marks New Year's Day as a holiday.

The area that became known as the Green Zone on the west bank of the Tigris River was occupied by the United States shortly after the 2003 U.S. invasion and walled off from the rest of the city.

Until Wednesday, Saddam's former palace formally served as the U.S. Embassy and headquarters of the U.S military in Iraq. Thursday's palace handover was mostly ceremonial, as most U.S. diplomats and military officials long since moved to a new embassy building on the other side of the Green Zone, which is also known as the International Zone.

"We have the right to be proud and to be happy and to hold celebrations these days, especially on this day," said al-Maliki, adding he would submit his national holiday proposal to the cabinet. "This day is to be remembered and we have the right to consider it a national day."

The 4-square-mile area along the Tigris is separated from the city by a 13-foot-high wall of reinforced concrete, dotted with watch towers and machine gun nests.

Restricted to U.S. and Coalition personnel, several other embassies, Iraqi ministries and parliament, it was considered the most potent and visible sign of American occupation and had often come under insurgent attacks. 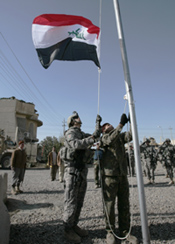 (AP Photo/Karim Kadim)
Although now under Iraqi control, it is unlikely to be dismantled any time soon because of the violence persisting around Baghdad - despite an overall dramatic drop in attacks and killings nationwide.

In the northern city of Mosul, where the fight against al Qaeda in Iraq continues, a parked truck bomb killed three police officers trying to search it and wounded a bystander.

Violence around Iraq had plunged in 2008, with attacks declining to an average of 10 a day from 180 a year ago. The murder rate in November was less than 1 per 100,000 people - far lower than many cities in the world.

U.S. military deaths in Iraq also plunged by two-thirds in 2008 from the previous year, a reflection of the improving security following the U.S. military's counterinsurgency campaign and al Qaeda's slow retreat from the battlefield.

For Iraqis, the fatalities had also plunged: During 2008, at least 7,496 Iraqis died in war-related violence according to an AP count, including 6,068 civilians and 1,428 security personnel, down 60 percent from 2007.

The Associated Press tally does not reflect a comprehensive total for Iraqi deaths because reports do not come in from all of the country. The estimate, however, has proven accurate for tracking trends.

The plunge in violence in Iraq follows the U.S. "surge" of 2007, when thousands of additional troops were sent in to try to rein in a country that appeared to be on the verge of disintegration. That was coupled with a counterinsurgency campaign that included a decision by Sunni tribesmen to switch allegiances and fight al Qaeda. A focused effort to rout Shiite extremists also gave U.S. and Iraqi forces the upper hand.