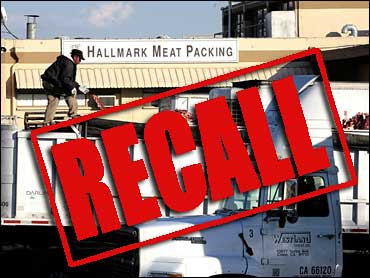 The U.S. Department of Agriculture on Sunday ordered the recall of 143 million pounds of frozen beef from a California slaughterhouse, the subject of an animal-abuse investigation, that provided meat to school lunch programs.

Officials said it was the largest beef recall in the United States, surpassing a 1999 ban of 35 million pounds of ready-to-eat meats. No illnesses have been linked to the newly recalled meat, and officials said the health threat was likely small.

The recall will affect beef products dating to Feb. 1, 2006, that came from Chino-based Westland/Hallmark Meat Co., the federal agency said.

About 30 school systems across Tennessee already had been asked to hold off on serving the meat.

CBS News consumer safety correspondent Nancy Cordes first reported on Westland/Hallmark's use of sick, or "downer" cows, on a January broadcast of the CBS Evening News.

Cordes reported that meat-industry officials said at the time that there was no way to know if the cows actually entered the meat supply and that ailing livestock would have had to pass a gauntlet of USDA veterinarians and inspectors before being slaughtered and sent to market.

But Secretary of Agriculture Ed Schafer now says his department has evidence that Westland did not routinely contact its veterinarian when cattle became non-ambulatory after passing inspection, violating health regulations.

"Because the cattle did not receive complete and proper inspection, Food Safety and Inspection Service has determined them to be unfit for human food and the company is conducting a recall," Schafer said in a statement.

A phone message left for Westland president Steve Mendell was not immediately returned.

Federal officials suspended operations at Westland/Hallmark after an undercover video from the Humane Society of the United States surfaced showing crippled and sick animals being shoved with forklifts.

Authorities said the video showed workers kicking, shocking and otherwise abusing "downer" animals that were apparently too sick or injured to walk into the slaughterhouse. Some animals had water forced down their throats, San Bernardino County prosecutor Michael Ramos said.

No charges have been filed against Westland, but an investigation by federal authorities continues.

Officials estimate that about 37 million pounds of the recalled beef went to school programs, but they believe most of the meat probably has already been eaten.

"We don't know how much product is out there right now. We don't think there is a health hazard, but we do have to take this action," said Dr. Dick Raymond, USDA Undersecretary for Food Safety.

Most of the beef was sent to distribution centers in bulk packages. The USDA said it will work with distributors to determine how much meat remains.

The school systems that still had the meat were mostly in West and East Tennessee, including Shelby County schools, he said.

Womack said that over the past two school years, about 120,000 pounds of raw ground beef from the company has been distributed in Tennessee.

"We don't know how much was consumed or thrown out," Womack said.

Officials are not yet sure how much of the company's processed meat products, which includes items like hamburger patties, are in the schools.

"We're still trying to figure that out," Womack said.

Womack estimated that 294,000 pounds of the processed meat product could have been distributed over the last two school years.

But Womack said that the commodity program makes up only a fraction of food served in the school lunch program.

"USDA surplus commodities only make up about 20 percent of the lunch plate," Womack said. "A relatively small amount of the school lunch plate could be affected by this."

Federal regulations call for keeping downed cattle out of the food supply because they may pose a higher risk of contamination from E. coli, salmonella or mad cow disease because they typically wallow in feces and their immune systems are often weak.

About 150 school districts around the nation have stopped using ground beef from Hallmark Meat Packing Co., which is associated with Westland. Two fast-food chains, Jack-In-the-Box and In-N-Out, said they would not use beef from Westland/Hallmark.

Jack in the Box, a San Diego-based company with restaurants in 18 states, told its meat suppliers not to use Hallmark until further notice, but it was unclear whether it had used any Hallmark meat. In-N-Out, an Irvine-based chain, also halted use of the Westland/Hallmark beef. Other chains such as McDonald's and Burger King said they do not buy beef from Westland.

Raymond countered a claim leveled by Humane Society President and CEO Wayne Pacelle, who said a USDA inspector was at the Westland plant for about two hours each day. USDA inspectors are there at slaughterhouses "continuously," Raymond said.

Federal lawmakers on Thursday had called for the Government Accountability Office to investigate the safety of meat in the National School Lunch Program.

Upon learning about the recall, some legislators criticized the USDA, saying the federal agency should conduct more thorough inspections to ensure tainted beef doesn't get to the public.

"Today marks the largest beef recall in U.S. history, and it involves the national school lunch program and other federal food and nutrition programs," said U.S. Sen. Tom Harkin, chairman of the Chairman of the Senate Committee on Agriculture, Nutrition and Forestry. "This begs the question: how much longer will we continue to test our luck with weak enforcement of federal food safety regulations?"

Advocacy groups also weighed in, noting the problems at Westland wouldn't have been revealed had it not been for animal right activists.

"On the one hand, I'm glad that the recall is taking place. On the other, it's somewhat disturbing, given that obviously much of this food has already been eaten," said Jean Halloran, director of food policy initiatives at Consumers Union. "It's really closing the barn door after the cows left."