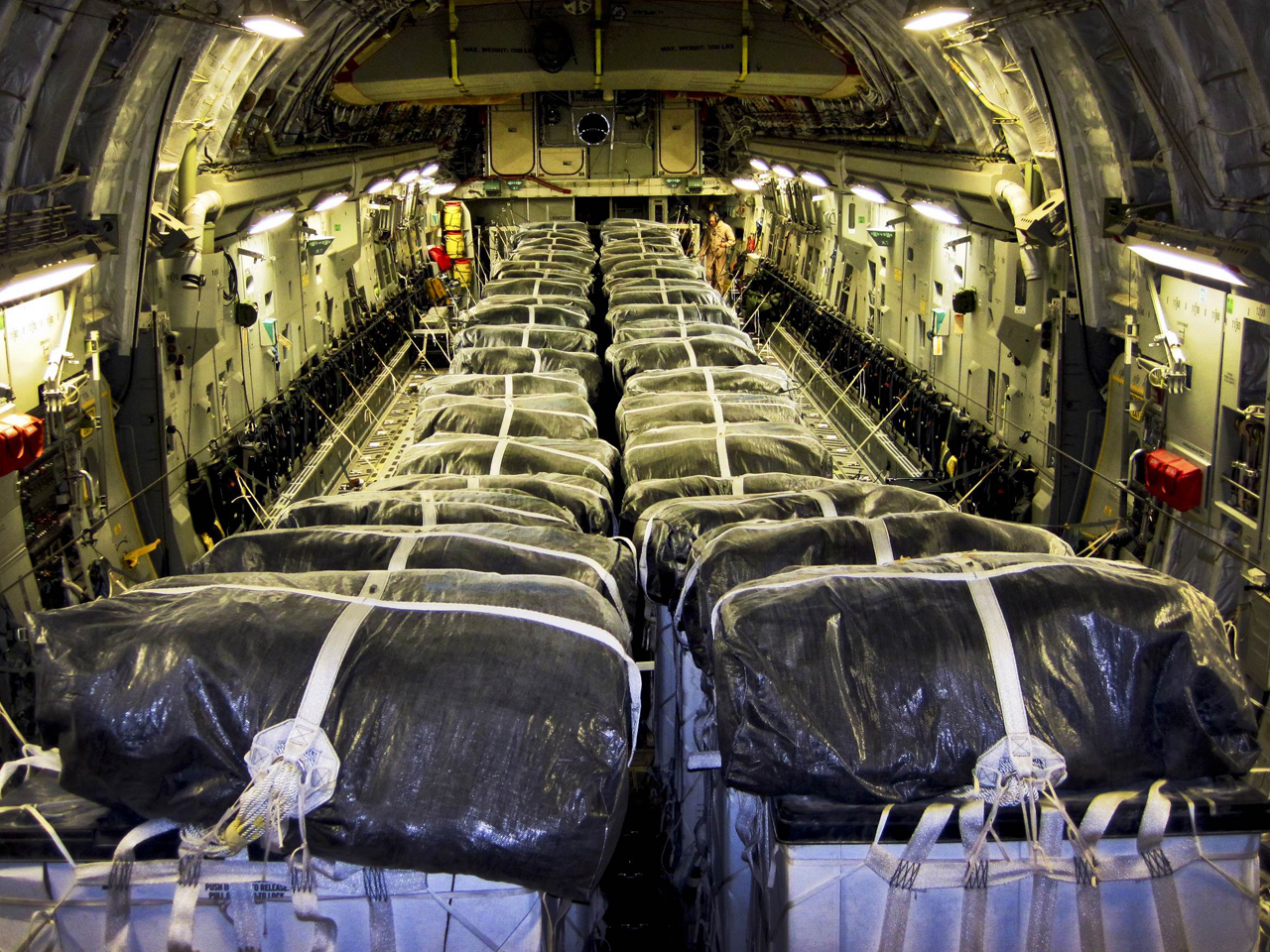 ERBIL, Iraq -- The U.S. launched a new airdrop Saturday to aid thousands of members of an Iraqi minority group who fled the advance of Islamic militants, trying to stem a worsening humanitarian crisis in a country reeling from the extremist offensive.

CBS News correspondent Holly Williams reports from Erbil that the U.S. intervention has been welcomed by Iraqis in the city, which is a stronghold of forces opposed to the extremists.

Fighting against the militants on the ground are soldiers from Kurdistan, an autonomous region in northeastern Iraq. Many of them were trained by the U.S. military, but this week they were forced to retreat, Williams reports.

They hope American airstrikes will allow them to regroup and then push back against the militants, Williams reports.

The extremists known as the Islamic State of Iraq and Syria, or ISIS, have captured hundreds of women from the Yazidi religious minority, according to an Iraqi official, while thousands of other civilians fled in fear.

Many of America's allies backed the U.S. intervention, pledging urgent steps to assist the legions of refugees and displaced people. Those in jeopardy included thousands of members of the Yazidi whose plight - trapped on a mountaintop by the militants - prompted the U.S. to airdrop crates of food and water to them.

Yazidis belong to ancient religion seen by ISIS, also known as the Islamic State of Iraq and the Levant, or ISIL, as heretical. The group also sees Shiite Muslims as apostates, and has demanded Christians either convert to Islam or pay a special tax.

American planes conducted a second airdrop of food and water early Saturday for those trapped in the Sinjar mountains, said Pentagon chief spokesman Rear Adm. John Kirby. Escorted by two Navy fighter jets, three planes dropped 72 bundles of supplies for the refugees, including more than 28,000 meals and more than 1,500 gallons of water, said Kirby, who spoke from New Delhi during a trip with U.S. Defense Secretary Chuck Hagel.

The extremists' "campaign of terror against the innocent, including the Yazidi and Christian minorities, and its grotesque and targeted acts of violence bear all the warning signs and hallmarks of genocide," said U.S. Secretary of State John Kerry. "For anyone who needed a wake-up call, this is it."

Underscoring the sense of alarm, a spokesman for Iraq's human rights ministry said hundreds of Yazidi women had been seized by the militants. Amin, citing reports from the victims' families, said some of the women were being held in schools in Iraq's second-largest city, Mosul.

"We think that the terrorists by now consider them slaves and they have vicious plans for them," Amin told The Associated Press. "We think that these women are going to be used in demeaning ways by those terrorists to satisfy their animalistic urges in a way that contradicts all the human and Islamic values."

For the U.S. military, which withdrew its forces from Iraq in late 2011 after more than eight years of war, the re-engagement began when two F/A-18 jets dropped 500-pound bombs on a piece of artillery and the truck towing it. The Pentagon said the militants were using the artillery to shell Kurdish forces defending Erbil, the capital of Iraq's autonomous Kurdish region, and home to a U.S. consulate and about three dozen U.S. military trainers.

Later Friday, the U.S. launched a second round of airstrikes near Erbil, U.S. officials said. The officials, speaking on condition of anonymity because they weren't authorized to discuss the strikes publicly, said unmanned aircraft hit a mortar and four Navy F/A-18 fighter jets destroyed a seven-vehicle convoy.

Expanding from their stronghold of Mosul, the militants have captured a string of towns and Iraq's largest hydroelectric dam and reservoir in recent weeks. Ethnic and religious minorities, fearing persecution and slaughter, have fled as their towns fell.

According to the U.N., more than 500,000 people have been displaced by the violence in Iraq since June, bringing the total this year to well over 1 million.

In contrast to Washington's decision to invade Iraq more than a decade ago, both the airdrop and the authorization of military action against ISIS were widely welcomed by Iraqi and Kurdish officials fearful of the militants' advance.

In his announcement Thursday night, Obama had identified protecting the Yazidis and defending Americans as the two objectives for the airstrikes.

But on Friday, his spokesman, Josh Earnest, said the U.S. was also prepared to use military force to assist Iraqi forces and the Kurds' peshmerga militia.

ISIS captured Mosul in June, and then launched a blitz toward the south, sweeping over Sunni-majority towns almost to the capital, Baghdad. It already holds large parts of western Iraq, as well as swaths of neighboring Syria.

Iraqi government forces crumbled in the face of the assault but have since been able to prevent the militants from advancing into Shiite-majority areas. In the north, the Kurds have been the main line of defense against the radicals, but their fighters are stretched over a long front trying to fend them off.

Hagel, traveling in India, said if Islamic militants threaten U.S. interests in Iraq or the thousands of refugees in the mountains, the U.S. military has enough intelligence to clearly single out the attackers and launch effective airstrikes.

At the White House, Deputy National Security Advisor Ben Rhodes met with members of the Iraqi Yazidi community and "noted that the United States will act, carefully and responsibly, to prevent a potential act of genocide," said Deputy NSC spokeswoman Bernadette Meehan. Rhodes "emphasized that the United States will continue to pursue a strategy that empowers Iraqis to confront this crisis, including by providing urgent assistance to Iraqi government and Kurdish forces," Meehan said.

The International Rescue Committee said it was providing emergency medical care for up to 4,000 dehydrated Yazidis, mostly women and children, who survived without food or water for up to six days hiding in the Sinjar mountains before fleeing to a refugee camp in Syria, where a civil war is raging.