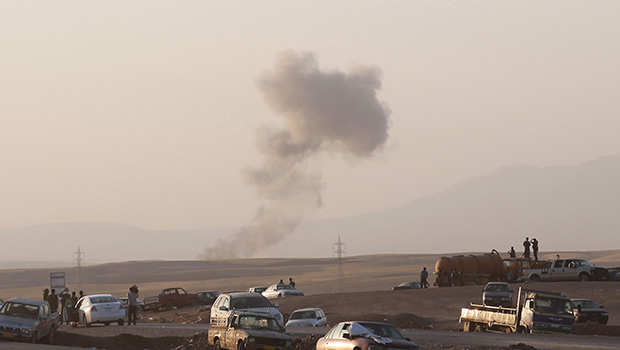 The United States launched more airstrikes Friday against Islamic militants around the northern Iraqi city of Erbil, the Pentagon said.

The Pentagon confirmed the U.S. military conducted two additional airstrikes "to help defend the city where U.S. personnel are assisting the government of Iraq." Scores of American military personnel and diplomats are based in Erbil.

Kirby said in a statement that shortly after 10 a.m. EDT, "remotely piloted aircraft struck a terrorist mortar position. When ISIL fighters returned to the site moments later, the terrorists were attacked again and successfully eliminated."

Kirby said that about an hour later, four F/A-18 jets successfully hit a militant convoy and a mortar position near Erbil.

"The aircraft executed two planned passes," Kirby said. "On both runs, each aircraft dropped one laser-guided bomb, making a total of eight bombs dropped on target, neutralizing the mortar and convoy."

Earlier Friday, U.S. fighters dropped bombs on the militants, the Pentagon said, carrying out President Barack Obama's promise of military force to counter the advancing militants and confront the threat they pose to Iraqi civilians and Americans still stationed there.

Kirby said the fighters had taken off from the aircraft carrier USS George H.W. Bush in the Persian Gulf to conduct the mission. He said it wasn't clear how many militants might have been killed in the earlier strike.

For the United States, it was a re-engagement in the long sectarian war from which American combat forces had been withdrawn - on Obama's orders - in late 2011.

In a televised speech Thursday night, Obama threatened to renew U.S. military involvement. At the same time, he announced that U.S. military planes already had carried out airdrops of food and water, at the request of the Iraqi government, to tens of thousands of Iraqi religious minorities atop a mountain surrounded by militants and desperately in need of supplies.

American planes conducted a second airdrop of food and water for thousands of refugees trapped in the Sinjar mountains, Kirby said late Friday.

He said three planes dropped 72 bundles of supplies for the refugees. Included in the aid were more than 28,000 meals and more than 1,500 gallons of water.

CBS News' Martin said the Pentagon would authorize strikes if ISIS militants didn't retreat from both the Sinjar mountains, where thousands of minority Yazidis have fled to avoid their advance, and from the area around Erbil, the capital of Iraq's Kurdish region.

With the militants showing no apparent signs of retreat and clashes with the Kurdish fighters continuing, the first strike came early Friday.

Meanwhile, the spokesman for Iraq's human rights ministry said hundreds of women from the Yazidi religious minority have been taken captive by militants from the Islamic State group.

Kamil Amin said the women are below the age of 35 and some are being held in schools in Iraq's second largest city, Mosul. He said the ministry learned of the captives from their families.

Tens of thousands of Yazidis fled when the Islamic State group earlier this month captured the northern Iraqi town of Sinjar, near the Syrian border. Amin's comments were the first Iraqi government confirmation that some women were being held by the group. The Yazidis practice an ancient religion that the Sunni Muslim radicals consider heretical.