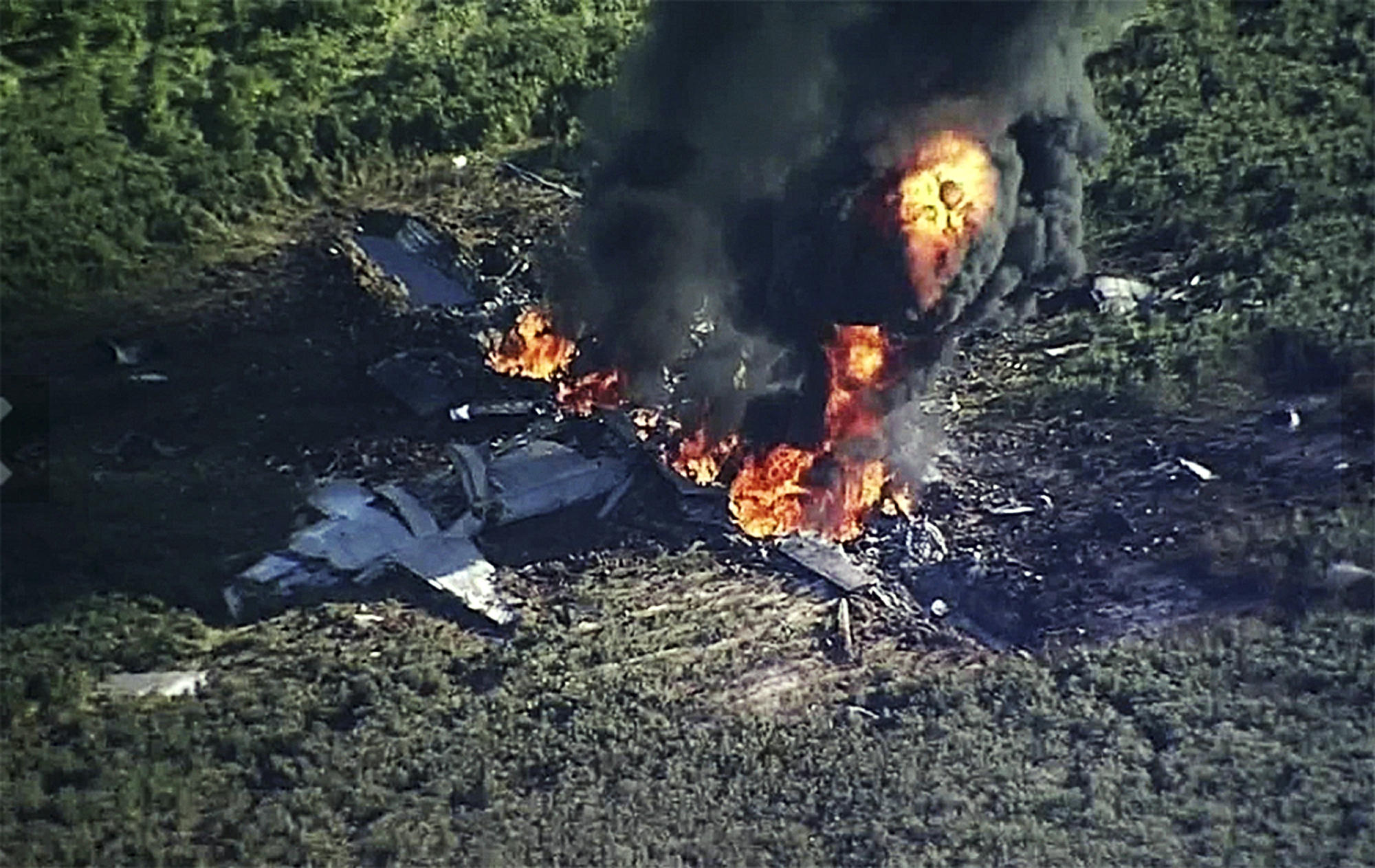 ITTA BENA, Miss. -- Investigators picked through debris across a fire-blackened soybean field Tuesday to try to determine why a U.S. military plane slammed into the ground, killing all 16 people aboard in the deadliest Marine crash anywhere in the world in more than a decade.

The KC-130 air tanker was carrying members of an elite Marine special operations unit cross-country for training in Arizona when it went down Monday afternoon in the Mississippi Delta, the military said. The fiery crash scattered wreckage for miles around and sent a pillar of black smoke rising over the countryside.

Witnesses said they heard low, rumbling explosions when the plane was still high in the sky, saw the aircraft spiraling toward the flat, green landscape and spotted an apparently empty parachute floating toward the earth.

Fifteen Marines and a Navy sailor were killed. Their identities were not immediately released.

The plane was based at Stewart Air National Guard Base in Newburgh, New York, and officials said some of those killed were from the base. Several bouquets were left at the main gate at Stewart, which was closed to reporters and issued no immediate statement.

Six of the Marines and the sailor were from an elite Marine Raider battalion at Camp Lejeune, North Carolina, the Marine Corps said. It said the seven and their equipment were headed for pre-deployment training at Yuma, Arizona.

One of the plane's stops was in North Carolina, presumably to pick up the seven commandos. The plane was scheduled to drop them and their equipment off for training at Marine Corps Air Station Yuma, Arizona, and fly on to a naval air field at El Centro, California.

"We looked up, and he was coming, and he started spiraling, and he just kept going," Fulgham told CBS News' David Begnaud.

The KC-130 tanker corkscrewed into the ground Monday afternoon about 85 miles north of Jackson, the state capital, officials said. It was the deadliest Marine crash -- in the U.S. or abroad -- since 2005. A witness said some bodies were found more than a mile away.

Near the crash site, Marine supporter David Weeks honored the fallen. The tragic final moments of their lives will be etched forever in the memories of witnesses like Gary Fulgham.

"I wanted to cry. You're just helpless you don't have any control over it, and you just want to help them so bad. It's pitiful," Gary Fulgham told Begnaud.

The plane was being tracked by air traffic controllers in Memphis, Tennessee, Begnaud reports. At 20,000 feet, it suffered a catastrophic failure, plunging out of the sky. As it started to fall, the plane went radio silent.

Andy Jones said he was working on his family's catfish farm just before 4 p.m. when he heard a boom and looked up to see the plane spiraling downward with one engine smoking.

Jones said that by the time he and others reached the crash site, fires were burning too intensely to approach the wreckage. The force of the crash nearly flattened the plane, Jones said.

Greenwood Fire Chief Marcus Banks told the Greenwood Commonwealth that debris was scattered in a radius of about 5 miles.

Jones said firefighters tried to put out the fire but withdrew after an explosion forced them back.

The fierce blaze, punctuated by small explosions, produced black smoke visible for miles across the flat region and continued to burn after dusk, more than four hours later.