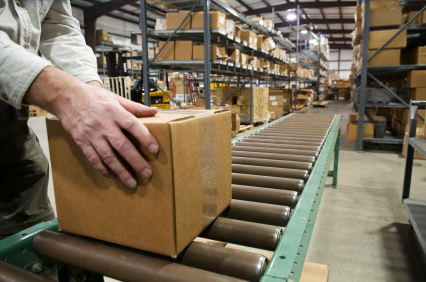 (AP) WASHINGTON - U.S. manufacturing shrank in June for the first time in nearly three years, adding to signs that economic growth is weakening.

Production declined, and the number of new orders plunged, according to a monthly report released Monday by the Institute for Supply Management.

The slowdown comes as U.S. employers have scaled back hiring, consumers have turned more cautious, Europe faces a recession and manufacturing has slowed in big countries like China.

"This is not good," said Dan Greenhaus, chief economic strategist at BTIG, an institutional brokerage. Though the report "does not mean recession for the broader economy, it is still a terribly weak number."

The trade group of purchasing managers said its index of manufacturing activity fell to 49.7. That's down from 53.5 in May. And it's the lowest reading since July 2009, a month after the Great Recession officially ended. Readings below 50 indicate contraction.

Stocks fell after the report was released at 10 a.m. The Dow Jones industrial average dropped more than 40 points in afternoon trading.

Economists said the manufacturing figures were consistent with growth at an annual rate of 1.5 percent or less. That would be down from the January-March quarter's already tepid annual pace of 1.9 percent.

"Our forecast that the U.S. will grow by around 2 percent this year is now looking a bit optimistic," said Paul Dales, an economist at Capital Economics.

Despite the discouraging data, most economists aren't predicting another recession. Though the ISM report suggests manufacturing is contracting, it typically takes a sustained reading below 43 to signal the economy isn't growing.

Still, U.S. manufacturing, which has helped drive growth since the recession ended, is faltering at a precarious time.

Americans have pulled back on spending, which drives roughly 70 percent of growth. Europe's economy is likely in recession, which has hurt U.S. exports.

And China's manufacturing sector grew in June at its slowest pace in seven months, according to a survey released Sunday by the state-affiliated China Federation of Logistics and Purchasing.

Manufacturing will likely stay weak for the next few months. The ISM's gauge of new orders, a measure of future activity, plunged from 60.1 to 47.8. That's the first time it has fallen below 50 since April 2009, when the economy was still in recession.

Fewer new orders reflect growing concerns of businesses. In addition to slower global growth and less spending by U.S. consumers, many worry that U.S. lawmakers won't extend a package of tax cuts at the end of the year.

Bricklin Dwyer, an economist at BNP Paribas, said the uncertainty "has left businesses unwilling to invest."

A gauge of production in the ISM's survey fell to its lowest level in more than three years.

U.S. factories are also reporting less overseas demand. A measure of exports dropped to 47.5, its lowest level since April 2009.

A gauge of employment edged down but remained at a healthy level of 56.6. That suggests factories may still be adding jobs. Manufacturers have reported job gains for eight straight months.

Overall hiring has slowed sharply this spring. Employers added an average of only 73,000 jobs per month in April and May. That's much lower than the average of 226,000 added in the first three months of this year. The unemployment rate rose in May to 8.2 percent from 8.1 percent, the first increase in a year.

Worries about slowing job growth are outweighing the benefits of lower gas prices. A measure of consumer confidence fell in June for the fourth straight month.

Slower job growth and falling confidence are weighing on consumers' willingness to spend. Americans cut back on purchases of autos and other long-lasting factory goods in May, the government said Friday.

There have been a few optimistic signs.

The housing market has steadily improved.

Construction spending rose 0.9 percent in May from April, the Commerce Department said in a separate report Monday. It was the second straight monthly increase, even though the level of spending still isn't healthy.

The increase was driven by a surge in residential construction. Home sales are up from the same month last year. Mortgage rates are at the lowest levels in history. And prices have begun to stabilize in most markets.

The economy could also get a boost from lower gas prices, which have tumbled more than 60 cents per gallon since peaking in April. The result is that consumers have more money to spend this summer on other goods, from autos and furniture to electronics and vacations, that fuel economic growth.