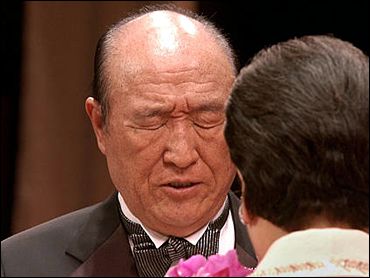 More than a dozen U.S. lawmakers turned out for a Capitol Hill reception honoring the Rev. Sun Myung Moon, the controversial leader of the Unification Church.

Some of the lawmakers later said they were duped when questioned about their presence at the event held at the Dirksen Senate Office Building on March 23.

The Washington Post reported that Moon received a crown that was placed on his head. The crown was carried on a pillow by Rep. Danny K. Davis, D-Ill., who wore white gloves, the newspaper said. [Details of the reception were first reported by Salon.com.]

The Post said Moon, 85, delivered a lengthy speech at the "Crown of Peace" ceremony. The newspaper quoted Moon as saying he was "sent to Earth . . . to save the world's six billion people. . . . Emperors, kings and presidents . . . have declared to all Heaven and Earth that Reverend Sun Myung Moon is none other than humanity's Savior, Messiah, Returning Lord and True Parent."

Congressman Davis told the Post that he was a Methodist who disagreed with many of Moon's religious teachings. But the Illinois lawmaker praised Moon's efforts on behalf of world peace.

About 100 people were honored for their work on behalf of peace at the local and national level. The Rev. Moon and his wife received "international crown of peace" awards.

A Drayton spokeswoman said the senator ducked in for a few minutes, got his photo taken during an awards ceremony, and then left. There was no indication Moon would be there, the senator's staff said.

"We went to greet constituents," Coleman said. "We weren't present for any strange activities that took place."

But the Post quoted George A. Stallings, an organizer of the event, as saying an invitation faxed to lawmakers stated that Moon and his wife would be honored at the reception.

Use of the Senate office building for the event would have to be approved by a senator. The identity of that senator is "shrouded in mystery," Stallings told the Post.

The Washington Times Foundation was listed as one of the sponsors of the gathering, and some GOP lawmakers told the Post they attended the reception to honor the conservative newspaper, which is owned by Moon.

One of them, Rep. Roscoe Bartlett, R-Maryland, said he had no idea Moon would receive an award and deliver a speech.

Moon's controversial career includes a 1982 conviction for tax fraud and conspiracy to obstruct of justice. According to the Post, the religious leader told the gathering that even "... dictators such as Hitler and Stalin, have found strength in my teachings, mended their ways and been reborn as new persons."