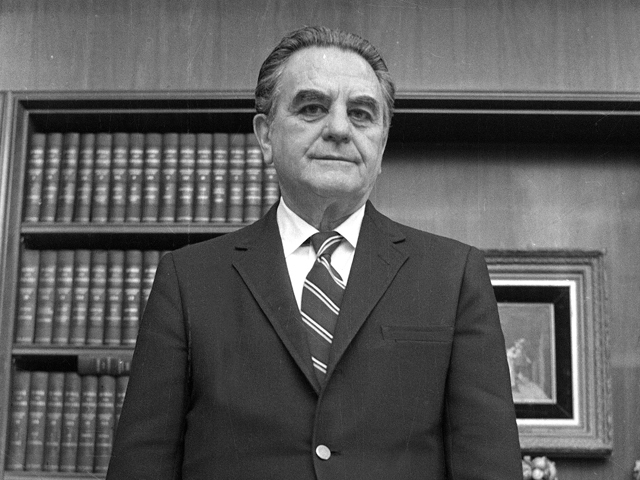 WASHINGTON Watergate Judge John J. Sirica aided the prosecution in pursuing the White House connection to the Democratic headquarters break-in by providing the special prosecutor information from a probation report in which one of the burglars said he was acting under orders from top Nixon administration officials, according to once-secret documents released Friday by the National Archives.

One newly public transcript of an in-chambers meeting between Sirica, the U.S. District Court judge in charge of the case, and then-Special Prosecutor Archibald Cox in July 1973 shows the judge revealed secret probation reports indicating that E. Howard Hunt had cited orders from officials high up in the Nixon administration. Several of Hunt's co-defendants had previously denied any White House involvement in court testimony, and Sirica told Cox and other prosecutors that he felt the new information "seemed to me significant."

The government released more than 850 pages from the Watergate political scandal, providing new insights on privileged legal conversations and prison evaluations of several of the burglars in the case. A federal judge had decided earlier this month to unseal some material, but other records still remain off limits.

The files do not appear to provide any significant new revelations in the 40-year-old case that led to the resignation of President Richard Nixon and criminal prosecutions of many of his top White House and political aides. But the files provide useful context for historians, revealing behind-the-scenes deliberations by Sirica, the U.S. District Court judge in charge of the case, along with prosecutors and defense lawyers.

The documents stem from the prosecution of five defendants arrested during the June 1972 Watergate break-in and two men, Hunt and G. Gordon Liddy, who were charged as the burglary team's supervisors. All seven men were convicted.

In the conversations between Cox and Sirica, the special prosecutor agreed with the judge's concerns that the probation report should be sealed and thanked him for the information. Cox promised that his team would not divulge the new information unless they felt there was a prosecutorial need and returned for a hearing to make it public. "Unless we came back," Cox told Sirica, "we wouldn't reveal it."

Former Nixon White House lawyer John Dean, who cooperated with prosecutors and testified against Nixon during an explosive congressional hearing in June 1973, said Friday after reviewing some of the newly released files that he believed Sirica "was very aggressive for a judge, even more than the White House was aware of at the time. No one in the Nixon White House knew exactly where he was coming from." Dean added that while Sirica's investigative zeal was well-known, his dealings with Cox and other prosecutors were "eye-opening."

U.S. District Judge Royce Lamberth ordered the files unsealed earlier this month after a request from Luke Nichter, a professor at Texas A&M University-Central Texas. Nichter wrote Lamberth in 2009 asking for release of the materials. Lamberth held back other sealed materials but agreed to ask the Justice department to explain the reasoning for keeping those materials secret.

The documents released by the Archives also reinforce Sirica's reputation as a gruff, no-nonsense jurist. During pretrial hearings in December 1972, Hunt's defense attorney sought to delay the trial after the former CIA man's wife was killed in a plane crash.

Sirica refused to put the trial on hold unless there was proof Hunt was suffering from a serious medical condition, according to the transcripts. "If he is just emotionally upset, that, in my opinion, is not a valid excuse," Sirica said. "If he gets tired during the day, I will arrange for him to go down and take a rest for two or three hours if he wishes."

A doctor who examined Hunt said in a letter to Sirica in early January 1973 that he suffered from ulcers and other gastrointestinal ailments but "has sufficient present ability to consult with his lawyer." The doctor, Charles E. Law Sr., said he was worried that Hunt would weep in court, especially when questioned by prosecutors.

Reports from prison psychiatrists and probation officers also show that four of Hunt's co-defendants justified their role in the Watergate break-in on national security grounds, saying they were under orders to search for evidence that Cuban government funds supported Democratic party campaigns. Dean said Friday that Hunt once told him that excuse was a ruse used to persuade the others to participate in the burglary.