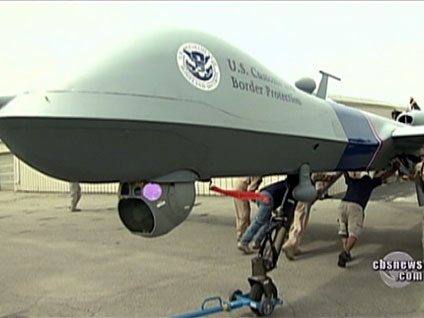 MEXICO CITY - The Mexican government said Wednesday it has allowed U.S. drones to fly over its territory to gather intelligence on drug traffickers, but insisted the operations were under its control.

The country's National Security Council said in a statement that the unmanned aircraft have flown over Mexico on specific occasions, mainly along the border with the U.S., to gather information at the request of the Mexican government.

The flights expand the U.S. role in the drug war, in which Americans already have been training Mexican soldiers and police as well as cooperating on other intelligence.

"When these operations are carried out, they are always done with the authorization, oversight and supervision of national agencies, including the Mexican Air Force," the council said.

It said Mexico always defines the objectives, the information to be gathered and the specific tasks in which the drones will be used and insisted that the operations respected Mexican law, civil and human rights.

U.S. expands use of drones over southern border

The drones "have been particularly useful in achieving various objectives of combating crime and have significantly increased Mexican authorities' capabilities and technological superiority in its fight against crime," the council said.

The drone operations were first reported Wednesday by The New York Times.

Mexican politicians have often criticized the involvement of U.S. agencies on Mexican soil. Last week, the Mexican Senate voted to summon Mexico's ambassador to the U.S., Arturo Sarukhan, to talk about allegations that U.S. agents allowed guns to be smuggled into Mexico as part of investigations into drug trafficking.

More than 35,000 people have died since President Felipe Calderon launched a stepped-up offensive against the cartels in late 2006.

U.S. Customs and Border Protection acknowledges it has flown drones into Mexico, and that it has been going on for years. In July 2009, the agency sent an Unmanned Aerial System, or drone, into Mexico to help investigate the murder of CBP Agent Robert Rosas, who was shot and killed while he was on a routine patrol near San Diego, CBP spokesman Juan Munoz-Torres said.

"At the request of the U.S. Government and concurrence of the Government of Mexico, the (drone) was flown in Mexico airspace to support law enforcement officers assigned to search and apprehend Agent Rosas' murder suspects who fled into Mexico near the border town of Campo, California," Munoz-Torres said. "The UAS ceased operations and returned to the U.S. once several investigative leads materialized."

Munoz-Torres said his agency does not conduct routine drone surveillance in Mexico but that there is no prohibition against the U.S. asking Mexico for permission to fly drones over its territory.

A 17-year-old boy later turned himself in to U.S. authorities and pleaded guilty to Rosas' murder. Christian Daniel Castro-Alvarez was sentenced last year to 40 years in federal prison.