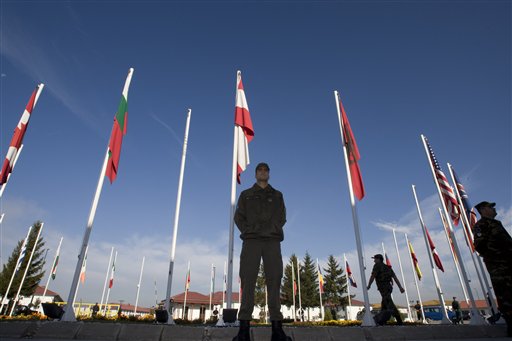 European and U.S. officials sat down with leaders in Bosnia on Friday for talks aimed at putting the country on a quicker path to EU and NATO membership.

In a sign Bosnians take the meeting very seriously, they have dubbed it "Dayton 2" _ a reference to the U.S.-brokered 1995 peace negotiations in Ohio that ended a war between Muslim Bosniaks, Christian Orthodox Serbs and Roman Catholic Croats.

The European Union and U.S. have long been worried over ethnic tensions in Bosnia and the slow pace of reforms since then. Friday's talks were aimed at outlining a plan on how to overcome a stalemate that keeps Bosnia behind other regional countries seeking to join the 27-nation EU and NATO.

Swedish Foreign Minister Carl Bildt and U.S. Deputy Secretary of State Jim Steinberg presented a joint EU-U.S. proposal to the leaders of Bosnia's main parties at a military base near Sarajevo.

The contents of the document have not been made public, but EU and U.S. officials said earlier that all sides in Bosnia will have to swallow things they perhaps will not like if they want the country to move forward.

The Dayton negotiations produced a hastily written constitution that has proven good enough to end a war, but not to create a functioning country.

It divided the country into a Serb Republic and a Bosniak-Croat Federation, linked by common institutions. It created an enormous administration with three presidents, three parliaments and several hundred ministers on various levels in a country of 3.5 million people.

The division of authority between the institutions of the two regions and the state remains unclear and each side interprets it in different ways.

It has worked so far only because the country has had an international administrator with the authority to ultimately interpret the agreement, fire local officials and impose laws when local politicians cannot agree.

This is why Bosnia is viewed as an international protectorate and as such the EU believes it does not fit the profile of a country that deserves membership. Transforming it into a functioning country has proved difficult because its three peoples have opposing views of its future.

Officials in the Serb Republic generally seek as much autonomy as possible. They are trying to keep the ethnic division of the country and get rid of the international administrator who has previously prevented them from extending their autonomy almost to the level of a separate state.

Bosniaks want to abolish the two mini-states so the country can join the EU as a unified nation, and they believe the international administrator should stay until there is stability.

Bosnian Croats in general agree with the unification, but believe if the ethnic division is to be kept, then it would be fair they also get their own region.

Olli Rehn, the EU's enlargement commissioner, is also taking part in Friday's negotiations. He told reporters that a constitutional reform should improve the functionality of the state institutions and that only a sovereign country with efficient institutions can be a credible candidate for EU membership.