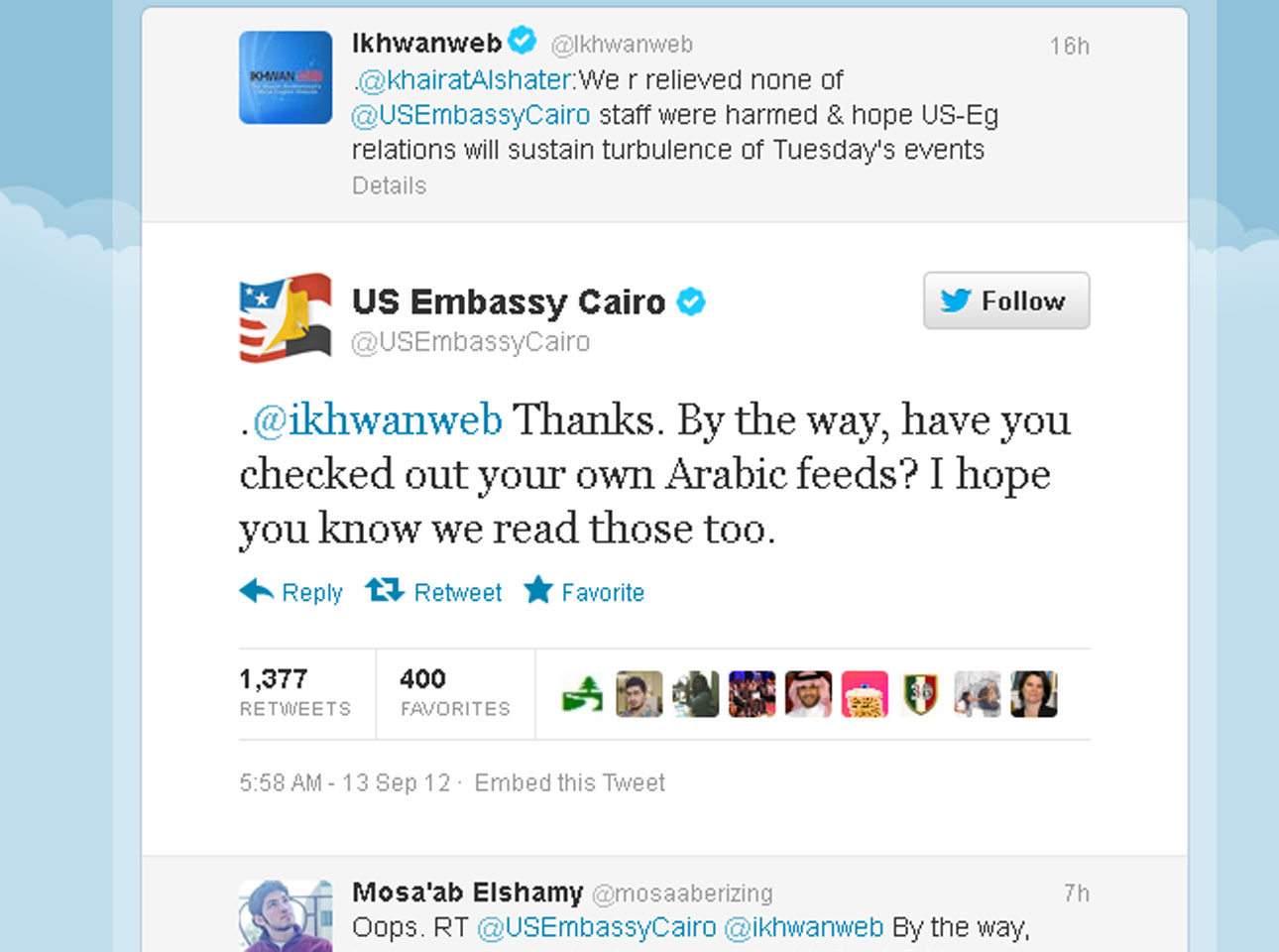 (CBS/AP) CAIRO - The snark is flying between the U.S. Embassy in Cairo and the Muslim Brotherhood in a Twitter spat that erupted in the wake of an assault on the mission by protesters in the Egyptian capital.

The sarcastic exchange Thursday - since deleted by the U.S. Embassy in Cairo's account -- gave a passive aggressive tone to relations that have been strained by the Tuesday night action. In the assault, hundreds of protesters angry over an anti-Islam film climbed up the wall of the embassy in downtown Cairo, entered the grounds, pulled down the American flag and replaced it with a black, Islamist banner. Security forces did nothing to stop them.

The embassy's tweets implied that the Brotherhood, whose longtime member Mohammed Morsi is Egypt's new president, has been sending mixed messages, fueling public anger over the movie.

It started when @Ikhwanweb, the Twitter page of the Muslim Brotherhood, retweeted a message in English from the group's deputy head, Khairat el-Shater.

While @lkhawanweb's tweets can still be found on their account, the tweets by @USEmbassyCairo have apparently been deleted. They can still be viewed through the Muslim Brotherhood's account, since its tweets were direct responses.

"Guys guys! stop! take it outside please..." came the plea from Abdelrahman Ghareeb, one of many tweeters who weighed in amusement over the exchange.

There was no immediate counter-tweet from the embassy.

The Brotherhood has put out statements in Arabic and English saying the breaching of the grounds was unacceptable, while insisting Egyptians have the right to demonstrate peacefully over the film, which it strongly denounced. It has also urged the U.S. to prevent any showings of the film, which denigrates Islam's Prophet Muhammad - reflecting the demand of many of the protesters.

Tuesday's protest, which was not called by the Brotherhood, was dominated by ultraconservative Islamists.

The U.S. has seemed impatient with Morsi's response to the violence. The Islamist president made no public comment beyond a vague Facebook posting until Thursday, after he spoke with President Barack Obama. He then condemned the attack while also harshly criticizing the movie.

"We condemn strongly ... all those who launch such provocations and who stand behind that hatred," Morsi said, adding that he had asked Obama "to put an end to such behavior."