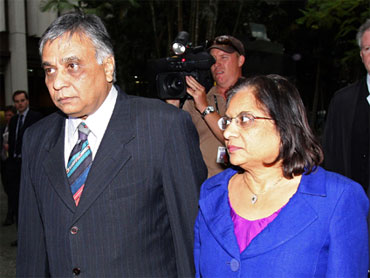 American surgeon Jayant Patel has been convicted of manslaughter in the deaths of three former patients in Australia.

A jury returned a guilty verdict Tuesday against the Indian-born doctor and U.S. citizen who worked in an Australian hospital between 2003 and 2005.

A U.S. Magistrate Judge in 2008 ordered that the 60-year-old Patel be sent from Oregon to Australia to stand trial.

Patel had pleaded innocent to three counts of manslaughter and one count of causing grievous bodily harm. The charges related to four patients he treated while working as director of surgery at the hospital in Queensland state.

The jury found him guilty on all charges.

Patel will be sentenced at a date not yet fixed.

Patel's initial court appearance, in February 2009, came more than a quarter century after questions were first raised about his competency, and marks a milestone for many former patients who have waited years to face the man they accuse of irreparably damaging their lives.

Patel, 58, faced more than a dozen charges, including manslaughter, grievous bodily harm and fraud relating to his job as director of surgery between 2003 and 2005 at the state-run Bundaberg Base Hospital in Bundaberg, a sugar industry town 230 miles north of Brisbane. He faces a possible life sentence.

Martin said Patel caused the deaths of three patients and seriously harmed two others in a pattern of negligence that included performing surgeries he had been banned from undertaking in the U.S., misdiagnosing patients and employing sloppy surgical techniques.

In 2004, prosecutor Ross Martin said, Patel failed to stop internal bleeding after operating on the esophagus of 77-year-old Gerardus Kemps, who later died of blood loss.

Darcy Blight was diagnosed with a tumor in his throat. But instead of removing the cancerous mass - large enough to be seen by the naked eye - Patel instead removed a healthy salivary gland, Martin said.

Patel took copious notes and remained relatively blank-faced throughout Monday's hearing, which was largely dedicated to accusations by the prosecution that he lied on his application to the Bundaberg hospital by failing to disclose that he'd been reprimanded by medical boards in the U.S.

In 1984, Patel was fined by New York state health officials and placed on probation for three years for failing to examine patients before surgery.

He later worked at Kaiser Permanente Hospital in Portland, Oregon. In 1998 - after reviewing 79 complaints about Patel - Kaiser restricted his practice. The Oregon Board of Medical Examiners later cited him for "gross or repeated acts of negligence."

Dr. Kees Nydam, who hired Patel in 2003, testified Monday that he would not have given Patel the job had he known about the restrictions placed on the surgeon by medical boards in the U.S.

Nydam was the first of 74 witnesses the prosecution plans to call during the three-week hearing, in which the judge will decide if prosecutors have enough evidence to send the case to trial.

Patel resigned two years after joining Bundaberg hospital, and went back to the U.S. He was extradited to Brisbane in July from his home in Portland.

Beryl Crosby, a former patient of Patel's who heads a support group for those who say they were hurt by the doctor, said outside court that it was difficult to see Patel again. But she said it was a "huge relief" that the case was finally moving forward.

"I think it's going to be emotional all the way through," she said.