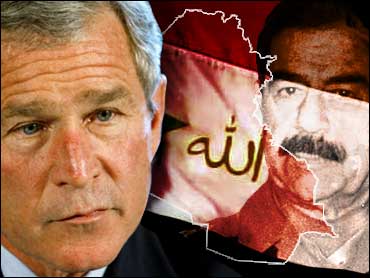 President Bush laid it on the line Tuesday, suggesting military action against Iraq is all but inevitable, reports CBS News Correspondent Bill Plante.

Asked what it would take to avoid war, Mr. Bush said, "There's only one thing – that's full disarmament. The man has been told to disarm. For the sake of peace, he must completely disarm."

Mr. Bush also made it very clear that even though the administration has gone back to the U.N. to seek international support, a "no" vote won't stop the war.

"As I said all along, it would be helpful and useful, but I don't think we need a second resolution," the president said.

Mr. Bush predicted Iraq would continue to play games for more time. And, in fact, Iraq has informed chief U.N. weapons inspector Hans Blix that it has discovered documents dealing with the disposal of biological agents and that it has found a bomb capable of carrying bio-weapons.

Asked if this amounts to progress, Blix said, "Yes, there are some elements that are positive and which need to be explored further."

The administration derided the new discovery as "dribs and drabs," and no more than another attempt at delay.

As the drum for war intensifies, Saddam, meanwhile, told CBS Anchor Dan Rather that he would die before leaving Iraq in exile.

"I was born here in Iraq ... I am proud to have been born fearing God and I have taught my children the value of history and the value of human stands ... Whoever decides to forsake his nation from whoever requests is not true to the principles. We will die here. We will die in this country and we will maintain our honor -- the honor that is required…in front of our people."

In the exclusive interview, Saddam also denied links to terrorist Osama bin Laden, and also refuted speculation that he would blow up Iraq's oil fields or dams as a "scorched earth" policy if Iraq becomes beseiged by a U.S.-lead coaltion.

More details from the interview, the first by Saddam with an American journalist in 10 years, will be seen on Wednesday CBS The Early Show and in a full-hour special presentation of 60 Minutes II at 9 p.m. EST, 8 CT.

At the Security Council, deep divisions remained over whether Iraq has squandered its last opportunity to disarm.

Canada, which isn't on the Security Council, was trying to bridge two competing plans that were introduced Monday: a U.S.-British-Spanish resolution that seeks U.N. authorization for war; and a French-Russian-German proposal to strengthen U.N. inspections and continued them at least into July to disarm Iraq peacefully.

Canada circulated a document to council members Tuesday proposing a series of benchmarks Iraq would have to meet by the end of March. The council would then be asked to vote on whether Iraq was complying with its U.N. obligations, diplomats told The Associated Press.

The Canadian ideas were well received by some of the swing voters the United States is trying to court, but it was unclear how the five veto-holding powers would react. U.S. Ambassador John Negroponte seemed to reject the concept Monday when he told the council the only benchmarks Iraq had to meet were in the November resolution.

The vote, expected in mid-March, could well be influenced by chief inspector Blix's next written report, due by Saturday, and by his appearance before the council on March 7 with U.N. nuclear chief Mohamed ElBaradei.

To pass, the resolution must have nine "yes" votes and avoid a veto by France, Russia or China, which has announced support for the French-Russian-German plan. The sponsors of the plan say it can be implemented without a new resolution.

Only Bulgaria is now considered in the U.S.-British-Spanish camp. The 11 other council members, to varying degrees, back continued inspections.

Blix said Tuesday that Iraq had provided inspectors with half a dozen letters containing new information on weapons, including one letter saying the Iraqis had found a filled aerial bomb. He said Iraq had also reported finding handwritten documents on the disposal of "prohibited items in 1991."

"There are pieces of evidence that are coming forward, but we still have to see this evidence," he told reporters.

"This is cooperation on substance," Blix said. "Substance is if you find weapons, you can destroy it. If you find documents, it may constitute evidence. That's not process."

Fleischer, the White House spokesman was unimpressed: "The United Nations inspectors, when they left the country, said there were 400 such weapons unaccounted for. Now we found one — where are the other 399? How much time does Saddam Hussein want to dribble those out?"

Last week, Blix ordered Iraq to begin destroying its Al Samoud 2 missiles by Saturday because they exceed the 93-mile limit in U.N. resolutions.

In an exclusive interview with CBS News Anchor Dan Rather, Saddam indicated that he might not destroy the missiles. But Iraq's Deputy Prime Minister Tariq Aziz insisted Tuesday that no decision on the missiles had been reached.

Iraq maintains the missiles don't exceed the limit and has asked for technical talks. But when Blix was asked before meeting with his advisory College of Commissioners whether the issue was open for debate, he said, "not between us and Iraq."