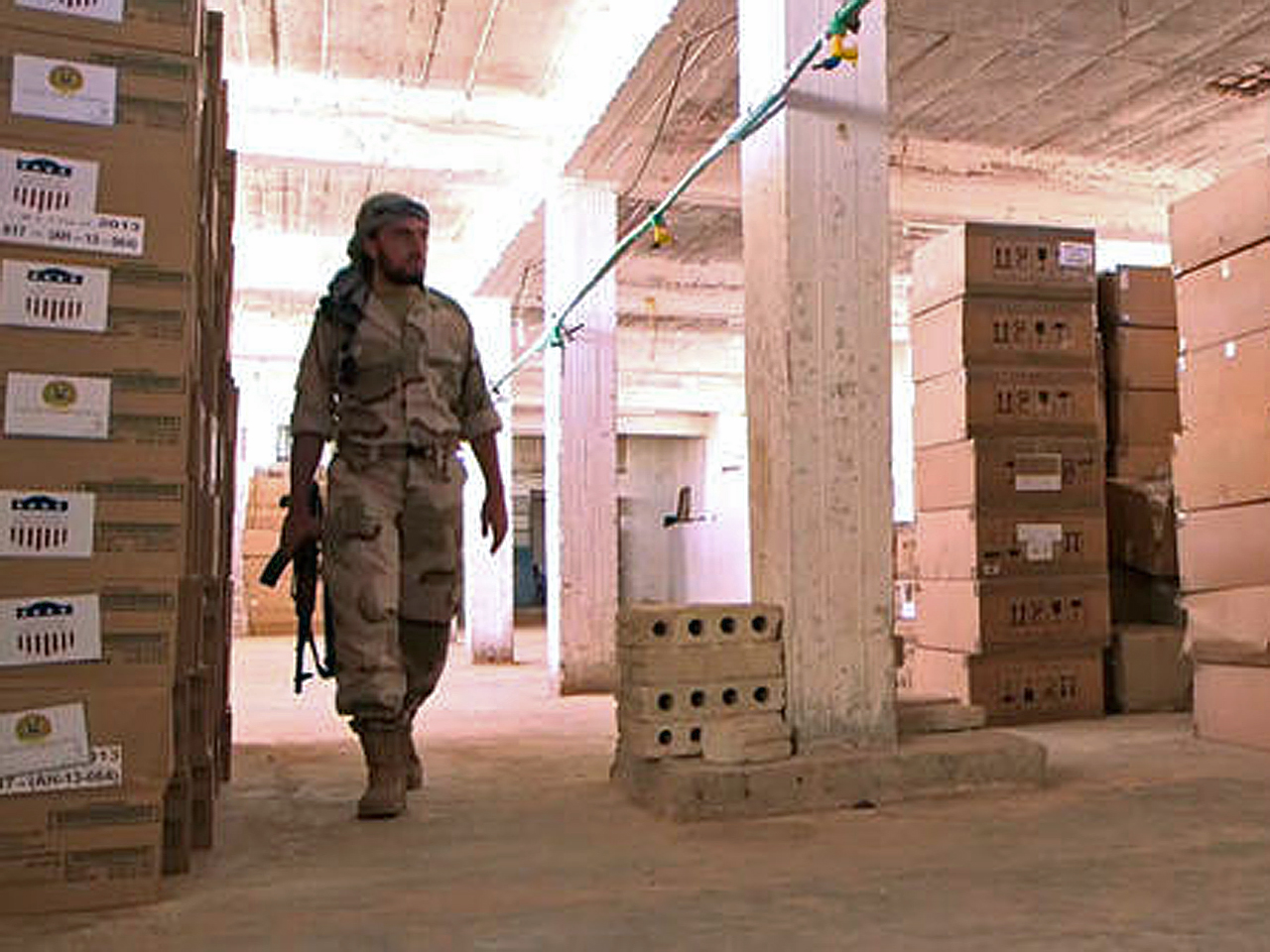 The United States and Britain have suspended all non-lethal assistance into northern Syria after Islamic extremist forces seized the headquarters and warehouses belonging to the opposition's Supreme Military Council (SMC), U.S. officials confirmed to CBS News on Wednesday.

The rebel Free Syrian Army fighting President Bashar al-Assad said the U.S. and British moves were rushed and mistaken. "We hope our friends will rethink and wait for a few days when things will be clearer," FSA spokesman Louay Meqdad said.

The suspension underlines a crisis for the FSA leadership which needs international backing to reinforce its credibility and to stop its fighters joining powerful al Qaeda-backed Islamist militants who now dominate the war with Assad.

The United States and Britain have in the past offered radios, body armor, medical supplies, money and food to rebels fighting Assad, but a U.S. embassy spokesman in Turkey declined to give details of what supplies may have been halted.

Fighters from the Islamic Front, a union of six major rebel groups, took control of the Free Syrian Army (FSA) bases at the Bab al-Hawa crossing on Syria's northwestern border with Turkey late on Friday.

Turkey shut its side of the border crossing, in Hatay province, due to a reported increase in clashes on the Syrian side, customs sources told Reuters. There was no immediate confirmation from Turkish officials.

The Syrian Observatory for Human Rights, a British-based anti-Assad monitoring group, said the Islamic Front had seized dozens of 'Shilka' anti-aircraft weapons and anti-tank rockets from the SMC arms stores in fighting on Friday and Saturday.

The Islamic Front's battlefield success in capturing the weapons stores could undermine SMC assurances to the United States that no supplies sent to their fighters would fall into the hands of Islamist brigades.

The U.S. embassy spokesman in Ankara said the situation was being investigated "to inventory the status of U.S. equipment and supplies provided to the SMC".

"As a result of this situation the United States has suspended all further deliveries of non-lethal assistance into northern Syria," the spokesman said.

Infighting among Syrian rebels has weakened their efforts to bring down President Bashar Assad in the conflict which began as peaceful protests against his rule in March 2011 and has descended into civil war.

CBS News correspondent Clarissa Ward said the move by the U.S. government could represent "the nail in the coffin" for the relatively moderate Free Syrian Army rebels once championed so publicly by the Obama administration.

Ward visited the SMC/FSA warehouse at Bab al-Hawa earlier this year and saw first-hand the sort of aid that was being distributed by the U.S.; halal military rations, sleeping bags, body armor, and heard the complaints of rebel commanders dressed in newly-issued uniforms who "barely had a box of ammunition between them."

Ward noted, however, that the SMC's failure cannot be blamed entirely on the lack of military aid from the U.S.; "the Supreme Military Council repeatedly demonstrated a failure to control the various groups under its umbrella. Reports of looting and poor discipline were rampant."

Idris' fighters, noted Ward, were simply unable to stand-up to groups like the Islamic State of Iraq and Syria (ISIS), the al Qaeda affiliate in the region, and the powerful al Nusra Front, whose brutal tactics and extremist ideology galvanized the rebel movement.

The day after Ward and her crew visited Idris' headquarters at the Bab al-Hawa border crossing, a car bomb hit their checkpoint.


A State Department official told CBS News that the U.S. government was working with SMC commander Gen. Salim Idris to inventory‎ equipment already provided to his forces in the area.

CBS News correspondent Margaret Brennan reported that the last non-lethal U.S. aid shipment to the SMC was made on Nov. 26.‎

The U.S. officials who spoke to CBS News and Reuters stressed that humanitarian aid to Syria was not being suspended. That aid is distributed via international and non-governmental organizations, not directly to opposition groups.

Brennan said the U.S. government was still trying to determine its policy on the newly-formed Islamic Front and to clarify the umbrella group's association with the SMC.