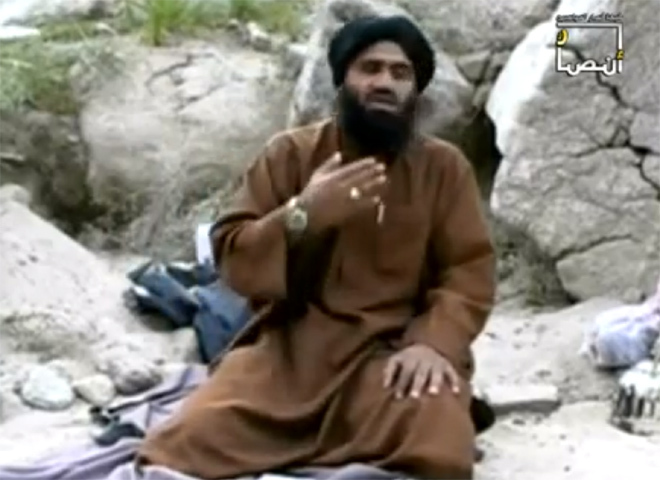 WASHINGTON Osama bin Laden's spokesman and son-in-law has been captured by U.S. intelligence officials and has been brought to New York, CBS News has learned.

A law enforcement source confirmed to CBS News senior investigative producer Pat Milton that Sulaiman Abu Ghaith was arrested in Jordan and has been brought to New York to face terrorism-related charges.

The source told Milton that Ghaith is scheduled to be arraigned Friday on a sealed indictment in U.S. District Court for the Southern District of New York in Manhattan.

The source confirmed to Milton that Ghaith was picked up in Jordan days ago, where he was apparently traveling to Kuwait from Turkey.

Abu Ghaith was charged Thursday with conspiring to kill Americans in his role as the terror network's top propagandist who lauded the attacks of Sept. 11, 2001 — and warned there would be more.

"No amount of distance or time will weaken our resolve to bring America's enemies to justice," Attorney General Eric Holder said in the statement. "To violent extremists who threaten the American people and seek to undermine our way of life, this arrest sends an unmistakable message: There is no corner of the world where you can escape from justice because we will do everything in our power to hold you accountable to the fullest extent of the law."

King, R-N.Y., credited the CIA and FBI with catching Ghaith, calling it a "very significant victory" in the ongoing fight against al Qaeda.

"I trust he received a vigorous interrogation, and will face swift and certain justice," King said in a statement sent to news outlets.

"Definitely, one by one, we are getting the top echelons of al Qaeda," King said Thursday. "I give the (Obama) administration credit for this: it's steady and it's unrelenting and it's very successful."

The case marks a legal victory for the Obama administration, which has long sought to charge senior al Qaeda suspects in American federal courts instead of holding them at the military detention center at Guantanamo Bay, Cuba. But it immediately sparked an outcry from Republicans in Congress who do not want high-threat terror suspects brought into the United States.

"If this man, the spokesman of 9/11, isn't an enemy combatant, who is?" Sen. Lindsey Graham, R-S.C., told reporters. Abu Ghaith "should be going to Gitmo. He should be kept there and questioned."

Human Rights First praised the decision to bring Abu Ghaith to federal court."Our nation's track record of successfully prosecuting alleged terrorists in federal court is second to none," said Human Rights First's Raha Wala. "Federal prosecutors chose to bring Mr. Abu Ghaith before a federal court because they know this is where this case belongs. That decision underscores the confidence Americans should have in our tried and true system of justice and its ability to handle these complex cases."

Human Rights First noted nearly 500 cases related to international terrorism have been completed in federal court since 9/1, including 67 cases captured overseas, while military commissions have convicted only 7 individuals since 9/11, and two of those convictions were recently overturned.

The Justice Department said Abu Ghaith was the spokesman for al Qaeda, working alongside bin Laden and current leader Ayman al-Zawahri, since at least May 2001. Abu Ghaith is a former mosque preacher and teacher and urged followers that month to swear allegiance to bin Laden, prosecutors said.

The day after the 9/11 attacks, prosecutors say he appeared with bin Laden and al-Zawahri and called on the "nation of Islam" to battle against Jews, Christians and Americans.

A "great army is gathering against you," Abu Ghaith said on Sept. 12, 2001, according to prosecutors.

Shortly afterward, Abu Ghaith warned in a speech that "the storms shall not stop — especially the airplanes storm" and advised Muslims, children and al Qaeda allies to stay out of planes and high-rise buildings. In one video, he was sitting with bin Laden in front of a rock face in Afghanistan. Kuwait stripped him of his citizenship after 9/11.

In 2002, under pressure as the U.S. military and CIA searched for bin Laden, prosecutors said Abu Ghaith was smuggled into Iran from Afghanistan.

Tom Lynch, a research fellow at the National Defense University in Washington, described Abu Ghaith as one of a small handful of senior al Qaeda leaders "capable of getting the old band back together and postured for a round of real serious international terror."

"His capture and extradition not only allows the U.S. to hold — and perhaps try — a reputed al Qaeda core survivor, further tarnishing the AQ core brand, but it also points to the dangers for those few remaining al Qaeda core refugees," Lynch said.

Abu Ghaith's trial will mark one of the first prosecutions of senior al Qaeda leaders on U.S. soil. Charging foreign terror suspects in American federal courts was a top pledge by President Barack Obama shortly after he took office in 2009 — aimed, in part, to close Guantanamo Bay.

Republicans have fought the White House to keep Guantanamo open. Several GOP lawmakers on Thursday said Abu Ghaith should be considered an enemy combatant and sent to Guantanamo, where he could be questioned more thoroughly than his lawyers likely will allow as a federal defendant on U.S. soil.

Generally, Guantanamo detainees have fewer legal rights and due process than they would have in a court in America but could potentially yield more information to prevent future threats.

Graham, the South Carolina senator, accused the White House of sneaking Abu Ghaith into the U.S. to avoid any backlash from Congress.

Since 9/11, 67 foreign terror suspects have been convicted in U.S. federal courts, according to watchdog group Human Rights First, which obtained the data from the Justice Department through a Freedom of Information Act request.

By comparison, of the thousands of detainees who were swept up shortly after the terror attacks and held at Guantanamo Bay, only seven were convicted by military tribunals held at the U.S. Navy base in Cuba, the watchdog group said. The vast majority have been sent back overseas, either for rehabilitation or continued detention and prosecution.

Exactly how the U.S. captured Abu Ghaith is still unclear.

A Jordanian security official confirmed that Abu Ghaith was handed over last week to U.S. law enforcement officials under both nations' extradition treaty. He declined to disclose other details and spoke on condition of anonymity because of the sensitivity of the matter.

The Turkish newspaper Hurriyet reported that Abu Ghaith was caught on his way to Kuwait, shortly after leaving Turkey.

The newspaper said that Abu Ghaith was taken into custody more than a month ago at a luxury hotel in in Ankara, the Turkish capital. But Turkish officials decided he had not committed any crime in Turkey and released him, the newspaper reported.

In Ankara, Turkish officials refused to confirm Abu Ghaith's deportation or his capture in Jordan to The Associated Press. U.S. intelligence officials in Washington and New York also declined to confirm details.