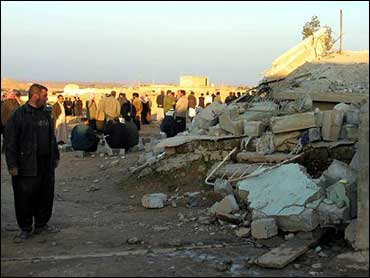 The United States military acknowledged dropping a 500-pound bomb on the wrong house outside the northern city of Mosul on Saturday, killing five people. But the man who owned the house said the bomb killed 14 people — including seven children.

The strike in the town of Aitha, 30 miles south of Mosul, came hours before a senior U.S. Embassy official in Iraq met with leading members of the Sunni Arab community in efforts to persuade them to participate in Jan. 30 elections, which they have threatened to boycott. Violence also continued, with at least nine Iraqis killed and several kidnapped.

American officials repeatedly have insisted the vote go ahead, but it is an extremely delicate time, with Iraq's government perceived by many as closely tied to the U.S.-led coalition.

Late Saturday, a U.S. military statement said an F-16 jet dropped a 500-pound GPS-guided bomb on a house that was meant to be searched during an operation to capture "an anti-Iraqi force cell leader."

The homeowner, Ali Yousef, told Associated Press Television News that the airstrike happened at about 2:30 a.m., and American troops immediately surrounded the area, blocking access for four hours. The brick house was reduced to a pile of rubble.

An Associated Press photographer said from the scene that 14 members of the same family — seven children, four women and three men — were killed, and six people were wounded, including another child.