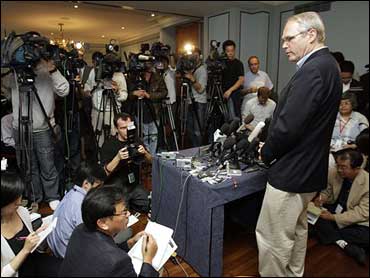 The United States opened nuclear weapons talks with North Korea on Saturday following a conciliatory offer of food aid to the flood-ravaged country.

Chief North Korean negotiator Kim Gye Gwan arrived at the United States diplomatic compound for the first of two days of talks that the United States hopes will help crack the main obstacles that stand in the way of ending the country's nuclear weapons program for good.

Kim declined to make any forecasts. "It's not our custom to predict the results before the meeting," he told reporters.

Washington has been careful to describe its talks with North Korea as coming under the umbrella of six-nation talks to dismantle the North's nuclear weapons program.

But hours before the talks began, the U.S. government expressed condolences for North Korean losses of life and homes in widespread flooding and offered to discuss with Kim Jong Il's government provision of "a significant food aid package, including monitoring procedures," with no mention of the six-party talks.

U.S. State Department spokesman Tom Casey noted that severe August floods have worsened the already desperate situation of the North Korean people and that the food aid would be on top of U.S. antibiotics already being provided.

"This nuclear issue is a tough one," U.S. Assistant Secretary of State Christopher Hill told reporters Friday after his arrival in Geneva from Washington.

U.S. President George W. Bush said Thursday it is possible that North Korea will give up its nuclear weapons program before he leaves office. He said the United States, China, South Korea, Russia and Japan are making progress in their goal of achieving a de-nuclearized Korean peninsula, but he expressed frustration with the slow pace of the process.

U.S. officials said the talks were being held in a conference room of the U.S. Mission to U.N. offices in Geneva, and that the nine-member American delegation was seated across a table from the eight North Koreans.

Hill said he would try during the weekend talks to resolve some of the U.S.-North Korean differences so that the overall "six-party talks" can wrap up two key issues by the end of the year: securing North Korea's agreement to declare all its nuclear activities and disabling the equipment used to make nuclear weapons.

"These programs are not helping the DPRK," he said, using the initials of the Democratic People's Republic of Korea. "In fact, they're driving the DPRK into a deeper sense of isolation, which we're trying to reverse."

He said he also expected to urge North Korea to resolve its dispute with Japan over abductions of Japanese civilians as a crucial condition before Washington can accept North Korea's demand that it be removed from a U.S. list of countries accused of sponsoring terrorists.

"This is an issue that needs to be resolved," Hill said. "It's certainly been an impediment here, but I hope that it can be addressed."

Hill said on Wednesday in Washington that the United States will make sure Japan, as a close ally, is satisfied before removing North Korea from a U.S. terrorism list.

Japan is refusing to provide North Korea with energy and economic aid until the issue of the abductions of Japanese citizens in the 1970s and 1980s by North Korean agents is resolved.

The meeting in Geneva is part of a flurry of "working group" sessions called for in a six-nation February accord in which North Korea agreed to disable its plutonium-producing nuclear reactor and declare and eventually dismantle all its nuclear activities. In exchange, the economically struggling North is to receive oil and other aid. The U.S., as part of the agreement, promised to begin the process of removing the country from the terrorism list.

The North Korean mission to the U.N. said the delegation had arrived in Geneva but declined to comment.

Another point of disagreement has been over allegations that North Korea has a second, undeclared nuclear weapons program using enriched uranium. North Korea said recently it was willing to discuss the issue, although it did not acknowledge having such a program.

Years of tension and deadlock over North Korea's nuclear program which peaked with the country's nuclear test last October - have started to ease in recent months as the six-nation talks have made progress.