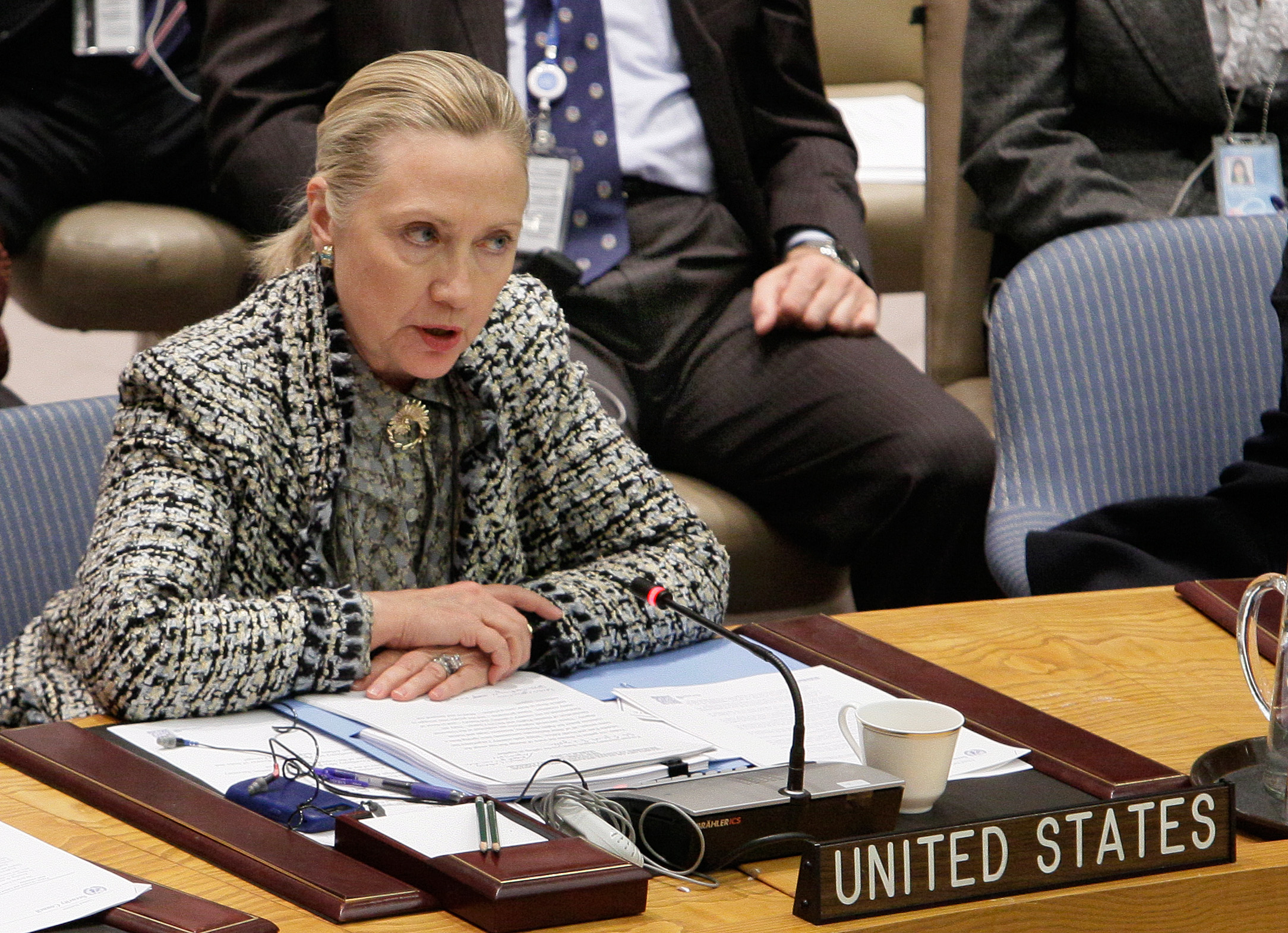 (CBS/AP) UNITED NATIONS - The United States and Russia clashed over Syria at the U.N. Monday after Secretary-General Ban Ki-moon urged the divided Security Council to speak with one voice and help the Mideast nation "pull back from the brink of a deeper catastrophe."

Washington and Moscow both called for an end to the bloody yearlong conflict — but on different terms, leaving in doubt prospects of breaking a deadlock in the council over a new resolution.

U.S. Secretary of State Hillary Rodham Clinton rejected any equivalence between the "premeditated murders" carried by President Bashar Assad's "military machine" and the civilians under siege driven to self-defense.

"We expect all nations, including Russia and China, to join us now in pressing the Assad regime to silence its guns, to allow humanitarian aid to enter, and to make way for a real political transition," Clinton said. "I pointed out my very strong view that the alternative to our unity on these points will be bloody, internal conflict with dangerous consequences for the whole region. So our message is clear, it is past time for action."

Lavrov said if the priority is to immediately end any violence and provide humanitarian aid to the Syrian people "then at this stage we should not talk about who was the first to start, but rather discuss realistic and feasible approaches which would allow (us) to achieve the cease-fire as a priority."

Clinton declared that the Security Council cannot "stand silent when governments massacre their own people, threatening regional peace and security in the process."

The ministerial debate in the council on challenges from last year's Arab Spring was dominated by the yearlong conflict in Syria, which has killed over 7,500 people, according to the United Nations.

Secretary-General Ban, who led off the debate, said the conflict has led the entire region into uncertainty and subjected citizens in several cities to disproportionate violence.

Russia, which is Syria's most powerful ally, and China have vetoed two U.S. and European-backed Security Council resolutions which would have condemned Assad's bloody crackdown, saying they were unbalanced and demanded that only the government stop attacks, not the opposition. Moscow accused Western powers of fueling the conflict by backing the rebels.

Earlier this month, the United States proposed a new draft which tried to take a more balanced approach, but diplomats said Russia and China rejected it, saying it was still unbalanced.

Lavrov flew to New York from Cairo, where he had a tense meeting with Arab League foreign ministers. They have endorsed a plan for Assad to hand power to his vice president, but the Russians are adamantly opposed to any resolution endorsing regime change.

In the end, the Arab League and Lavrov agreed on a five-point plan that the Russia foreign minister said could lead to an early solution of the Syrian crisis: an immediate cease-fire, a clause preventing foreign intervention, assurances about humanitarian aid, an impartial monitoring mechanism and an endorsement of the mission by former U.N. chief Kofi Annan, the new U.N.-Arab League special envoy to Syria.

Annan left Syria on Sunday without a deal to end the conflict, while regime forces mounted a new assault on rebel strongholds in the north.

Lavrov described Annan's mission as launching political dialogue between the government and all opposition groups but never mentioned the previous Arab League plan calling for a political transition. Clinton and her French and British allies said that plan and last month's General Assembly resolution backing the plan are the basis of the Lavrov-Arab League agreement.

"We believe that now is the time for all nations, even those who have previously blocked our efforts, to stand behind the humanitarian and political approach spelled out by the Arab League," Clinton said. "The international community should say with one voice -without hesitation or caveat — that the killings of innocent Syrians must stop and a political transition must begin."

French Foreign Minister Alain Juppe told reporters France has two "red lines" for any new resolution — the Assad regime must be blamed for the violence, and if there is a cease-fire its forces must stop fighting first, to be followed immediately by other groups. Russia has previously demanded a halt to all fighting at the same time.

Juppe said he would instruct France's U.N. ambassador to continue discussions on the U.S. draft resolution.

On the sidelines of the council debate, U.S. Secretary of State Hillary Clinton and Russian Foreign Minister Sergey Lavrov are scheduled to hold bilateral talks.

As he headed into Monday's meetings, German Foreign Minister Guido Westerwelle said he had three goals: ending the violence, getting access for humanitarian agencies, and a political transition.

"We try to convince Russia and China that it is a question of humanitarian solidarity to stand with the people in Syria ... (who) do nothing else but ask for freedom and human rights," he said. "I hope Russia and China no longer will be on the wrong side of history."

On the sidelines, the Quartet of Mideast peace mediators — the U.N., U.S., European Union and Russia — met behind closed doors on the escalating Israeli-Palestinian conflict, which is witnessing the worst flare-up in violence in more than a year.

The ministerial meeting reviewed efforts to get the Palestinians and Israelis back to the negotiating table, but deep divisions remain and there is little hope of a breakthrough.

Ban told the council afterward that "the peace process continues to stagnate" and he appealed to the Palestinians and Israelis "to show the courage and vision needed to reach a historic agreement." He also demanded an end to Palestinian rocketing of southern Israel and urged Israel to exercise "maximum restraint" to prevent further escalation of the violence.