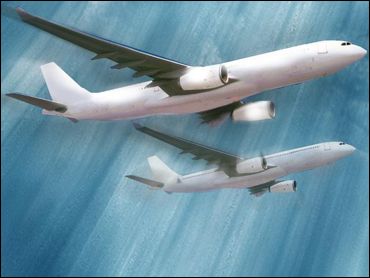 US Airways Group Inc., the nation's seventh largest airline, filed for bankruptcy protection Sunday for the second time in two years. The company's president vowed to continue restructuring the airline into a low-cost carrier during the bankruptcy process.

"We have come too far and accomplished too much to simply stop the process and not succeed," said Bruce Lakefield, US Airways' president and chief executive. "A restructured US Airways with low costs and low fares will be a dynamic competitor."

The Chapter 11 filing in U.S. Bankruptcy Court in Alexandria came after US Airways was unable to obtain $800 million in annual cost cuts from its workers' unions that the airline said it needed to stay afloat.

US Airways' busiest hub is in Charlotte, N.C. The airline carries about 90 percent of the city's passengers and employs 5,700 locally.

North Carolina Gov. Mike Easley said in a statement he has received assurances from US Airways "that there will be no changes in customer service and that their presence in Charlotte will continue."

Last Monday, a deeply divided pilots union refused to allow its membership to vote on a company proposal that would have cut pay by 20 percent and retirement plan contributions by 50 percent.

As recently as Friday, US Airways made a last-ditch effort to reach a deal with the pilots, offering a proposal with minimum pay cuts that would have required more flight hours each month, putting more pilots at risk of furlough.

Some pilot representatives who opposed the new deal said the pilots and other US Airways workers had made enough concessions during the company's first trip into bankruptcy in 2002. Then, the unions collectively agreed to contract concessions of more than $1 billion a year.

The airline had hoped the deal with its pilots might spur other unions to take action.

The bankruptcy filing also will likely cost federal taxpayers. The government loaned the airline $900 million last year as part of a special program to assist airlines after the Sept. 11 attacks.

The airline still owes Uncle Sam $718 million, and it will ultimately be up to a bankruptcy court to determine the government's place in line among the airline's creditors.

US Airways said Sunday that it has an agreement in place with the government and with other lenders to use some of its cash reserves to continue operations while in bankruptcy. In its filing, the company listed $8.8 billion in assets and $8.7 billion in liabilities.

A hearing was scheduled Monday morning in U.S. Bankruptcy Court.

US Airways said customers would notice no operational changes as a result of the bankruptcy and that it will seek permission to continue its frequent flyer program.

US Airways actually turned a small, $34 million profit in the last quarter. But the April-June period is typically an airline's strongest, and its prospects — both short and long-term — appeared poor because of relatively high labor costs, expensive fuel costs and intense new competition from low-cost carriers.

US Airways first filed for bankruptcy protection in August 2002 after the Sept. 11 attacks devastated the airline industry as a whole and US Airways in particular. The company had lost $2.1 billion in 2001 as it dealt with the prolonged closure of Washington's Reagan National Airport, where it was the largest carrier, after Sept. 11.

When US Airways filed for bankruptcy in 2002, it had already lined up potential financing for its emergence. The Texas Pacific Group had agreed to pay $200 million for a 38 percent stake in the airline, and shortly after the airline entered bankruptcy the federal government agreed to back a $900 million loan.

As it turned out, Texas Pacific was supplanted by the Retirement Systems of Alabama, a pension fund for state workers led by David Bronner, who has exhibited a penchant for unusual investments and who became the company's chairman.

After US Airways emerged from its first bankruptcy in March 2003, the airline made numerous changes, seeking to reinvent itself as a low-fare carrier in the mold of JetBlue Airways Corp. and America West, a unit of America West Holdings Corp.

It de-emphasized its hub-and-spoke system, eliminating its Pittsburgh hub altogether. It implemented a lower, simplified fare structure along parts of its network, including its hub in Philadelphia, where it faces a severe new challenge from Southwest Airlines.

More recently, the company sought to exploit one of its few profitable business segments — its Caribbean flights — by expanding its Caribbean offerings through a mini-hub in Fort Lauderdale, Fla.

In April, US Airways chief executive David Siegel, whose relations with employees had become strained, resigned. A $4.5 million severance payment he collected added to feelings of ill will among some workers.

Siegel was replaced by Lakefield, a close associate of Bronner who enjoyed better relations with union leaders. But Lakefield was also unable to extract concessions from the unions.