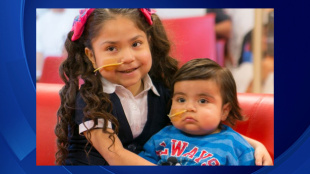 MIAMI - Five years after the transplant surgeons from the University of Miami Health System saved the life of an infant girl from Texas by performing a multi-organ transplant procedure, they were called upon again to save the life of her younger brother.

CBS Miami reports that when Delilah Valdez was just 16 months old, she developed a rare congenital disease. The girl's parents brought her to Holtz Children's Hospital, part of the University of Miami/Jackson Memorial Medical Center, where U-Health surgeons performed a seven-organ transplant to save her life.

In 2014, during an ultrasound while just six weeks pregnant Valdez's mother, Julissa Cerda, received devastating news about the embryo she was carrying. It was all too familiar and hard to deal with. Her doctors in Texas noticed that her second child's bladder was enlarged, and suspected he was developing the same rare congenital disease that also affected Delilah Valdez.

Doctors say both of Cerda's children developed Megacystis Microcolon Intestinal Hypoperistalsis Syndrome (MMIHS) or Berdon Syndrome. It's a rare prenatal condition involving a dilated urinary bladder, which causes massive abdominal distension, microcolon, and decreased or absent intestinal function. The condition is usually fatal within the first year of a child's life. It affects roughly one in 1 million children.

When Cerda gave birth in 2015, her son Liam Emmanuel Garza was immediately placed on an intravenous feeding. Liam's only chance at survival was a multi-organ transplant - and just a few hospitals in the United States specialize in these types of complex transplant surgeries for children.

Julissa was determined to have Liam treated at Holtz Children's Hospital where UHealth surgeons had saved her daughter's life. In 2011, Delilah received a new stomach, pancreas, liver, large and small bowel, spleen and kidney- a seven-organ transplant that made headlines around the world. Delilah, who is now 6-years-old and healthy, is thriving in kindergarten.

"I immediately knew that Liam's only change at survival would be at Jackson," said Cerda. "When my daughter Delilah was diagnosed, I did my research and I knew that Jackson was one of the few hospitals in the country that also performed stomach transplants."