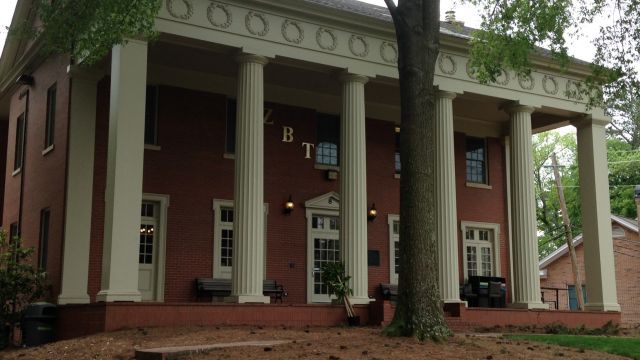 GAINESVILLE, Fla. -- The University of Florida is investigating allegations that members of the Zeta Beta Tau fraternity spat at a group of disabled military veterans last weekend at a resort in Panama City Beach.

In an email to Linda Cope, the founder of the Warrior Beach Retreat at Laketown Wharf Resort, University of Florida President Kent Fuchs called the behavior unacceptable and promised a full investigation.

The incidents were reported to Fuchs by Cope and others who witnessed the fraternity members spitting at the veterans and stealing their flags. Fuchs said the school is making every effort to learn what happened and take appropriate action.

The Gainesville Sun reports the fraternity is currently on conduct probation for a hazing incident in the fall semester. The fraternity has suspended operations and is cooperating with the investigation.

"Being on probation means the organization faces increased consequences if they are found to have violated the probation requirements," university spokeswoman Janine Sikes said.

The Sun reports that Zeta Beta Tau members from the University of Florida and Emory University in Georgia were attending their spring formals at the resort last weekend.

Emory officials said they are investigating but so far there's no evidence to implicate their students in the incident. Emory's Zeta Beta Tau fraternity told CBS 46 in Atlanta they were shocked to learn of what they call "atrocious acts."

But Cope told the station: "There were too many students from Emory for none of them to be involved. It is hard for me to believe that no Emory student was a part of this. This denial is a slap in the face of veterans."

About 60 veterans who fought in Iraq and Afghanistan were also attending a retreat which has been held twice a year for the last six years at the resort. Cope started the event in honor of her son Joshua, who lost both legs in Baghdad in 2006 when a roadside bomb exploded under his Humvee.

One letter to Fuchs described students spitting on veterans, throwing beer bottles over a balcony and ripping flags off their cars.

Cope said she believes the students knew they were insulting veterans because the guests were wearing caps and T-shirts indicating they are veterans.

"They knew who they were and they were just getting a kick out of it," she said. "It is heartbreaking for a mom with a son who sacrificed so much for their freedom."

Cope said hotel security got the situation under control and the fraternity members were evicted the next morning.

"They apologized to me in person, but only because they got caught," she said.

Chapter president Tyler Drescher told the newspaper they had no comment.

The fraternity sent a letter of apology to Cope. She said she looks forward to the outcome of the investigations.