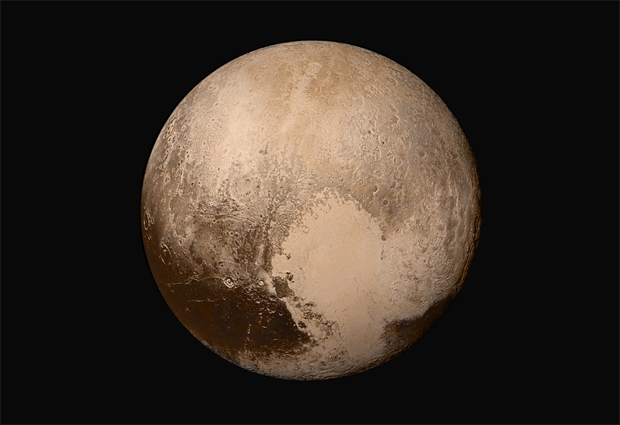 Intriguing new pictures from NASA's New Horizons spacecraft show what appear to be glacier-like flows of cold-but-malleable nitrogen ice on the surface of Pluto, slowly creeping across vast plains, bending around island-like peaks, filling in the occasional impact crater and butting up against steep hills and cliffs.

Equally exciting to scientists, a dramatic picture taken on the far side of Pluto shows the dwarf planet surrounded by a soft ring of light, sunshine scattered around the circumference of the small world by particles suspended in its tenuous nitrogen atmosphere.

It is an eerie, other-worldly view from the edge of the solar system, one that gives researchers a direct look at haze layers high above Pluto's frozen surface.

"This was the image that stunned the encounter team," said Michael Summers, a New Horizons co-investigator, told reporters Friday. "For for 25 years, it's been known that Pluto has an atmosphere. But it's been known by numbers. This is our first picture, this is the first time we're really seen it. This was the image that almost brought tears to the eyes of the atmospheric scientists on the team."

Beyond the stark beauty of the image, scientists were thrilled to detect distinct haze layers suspended 30 and 50 miles up, even though they are much higher in Pluto's atmosphere than models predicted.

"There is structure, there's an argument going on (as to) whether this is dynamics or chemistry, it's probably both," Summers said. "But the real answer is, this is our first peek at weather in Pluto's atmosphere. ... The haze is extensive, it extends at least a hundred miles above the surface. That is a big surprise, that's five times farther than our models predicted."

"That's telling you something is happening," Summers said. "It's another mystery we're going to have to deal with."

Equally mysterious is what might be driving the flow of nitrogen, methane and carbon monoxide ices across Pluto's surface, whether the ices might be welling up from liquid, radioactively heated reservoirs below the surface or whether they are the result of slow deposition from endless cycles of sublimation, atmospheric transport and condensation.

And it's still an open question as to whether Pluto might harbor a subsurface ocean of water, heated by radioactive compounds in the dwarf planet's rocky core.

New Horizons co-investigator William McKinnon showed off a seven-frame mosaic of Pluto's smooth, heart-shaped Sputnik Planum region, bordered to the south by towering chains of water ice mountains and in the north by rugged cliffs abutted by smooth ice flows.

"At the top of the picture, it's really different," he said, describing the terrain adjacent to the smoother ice flows. "There's a rugged landscape there, a degraded landscape, something that to a geologist's eye looks like something that has been very deeply and extensively eroded. We can tell its old, as well, because you can see with your own eye various impact craters of large size.

"But what's really interesting to us is the actual interaction between the Sputnik Planum and this rugged terrain. If you look carefully, you can actually see a pattern that indicates the flow of viscous ice towards the scarp, or cliff boundary of the rugged terrain. We call these streamlines ... and we interpret them to be just like glacial flow on the Earth."

Glaciers on Earth are made of water ice, but at Pluto's surface temperature -- around minus 390 degrees Fahrenheit -- water ice will not move, McKinnon said. "It's immobile and brittle."

"But on Pluto, the kind of ices we think make up the planum -- nitrogen ice, carbon monoxide ice, methane ice -- these ices are geologically soft and malleable even at Pluto conditions, and they will flow in the same way that glaciers do on the Earth. So we have actual evidence for basically recent geological activity."

In this context, "recent" means in the past few tens of millions of years. But McKinnon said nothing yet seen in the New Horizons data would rule out ongoing activity.

"We knew there was nitrogen ice on Pluto from spectra, we've known this for years," he said. "We imagined that nitrogen was sublimating, or evaporating, one place and condensing in another place. But to see evidence of recent geological activity is simply a dream come true."

It will take some 16 months for New Horizons to send back all of the data it has collected about Pluto, it's Texas-size moon Charon and four smaller satellites. So far, just 10 days after the spacecraft's high-speed fly by of Pluto on July 14, only about 5 percent of the stored data has made its way back to Earth.

But from what he's seen so far, Alan Stern, the New Horizons principal investigator, believes a strong case can be made for reversing Pluto's famous -- or infamous -- demotion from planethood.

"There's been this controversy where astronomers and planetary scientists have largely been on different sides of it," Stern said. "I think that you and the public, just like we on the science team, can pretty well tell what we're dealing with.

"It's very hard not to call an object like this -- with this level of complexity, an atmosphere, with potentially an internal ocean, certainly with complicated seasonal cycles and a big complicated system of moons -- a planet," he said. "We're going through a period of transition. And those definitions are in transition as well. It'll shake itself out, one scientist at a time, until we reach consensus."